A Dark Office Party, Shortages and Being Kind.

Well, we’ve had some wonderful rain and gravels that were dry in October are now submerged, a great start to the winter, keep it coming please weather gods.

And we’ll break off there for an appeal.Two Christamases ago I was gifted a drone, which, on its maiden flight got caught in a cross wind and buzzed off over the horizon. A replacement was purchased which was flown while in wine following a family dinner, this too sailed away, albeit on the gentlest of zephyrs. If anyone sees either of these two drones, don’t be a stranger, I’d like them back. 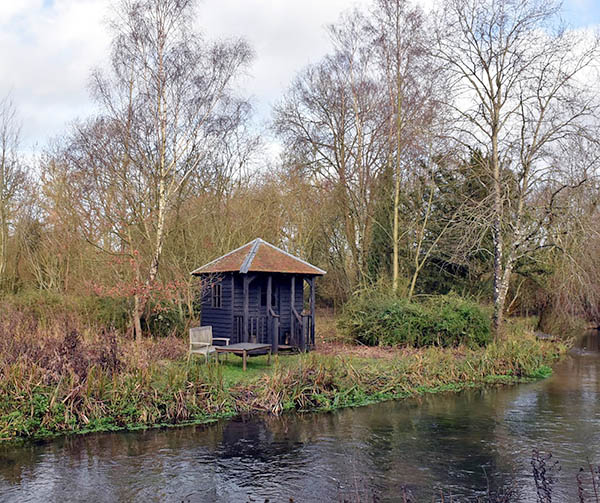 Through with plank production, we now turn the saw’s attention to the forces of crack willow, a large stand of which have fallen over behind the fishing hut in their efforts to take over the world. The work has also had the added benefit of opening up the stew ponds that have been mothballed with regard to fish production for six years. They were home to half a dozen laying ducks for a few years and with the promised shortages imminent, plans are afoot to once again run the ponds to rear poultry on rafts with the resulting by product (pooh) feeding algae, artemia, rotifers and much more besides that will provide a food source for carp which will then be harvested for food. Subsistence fish farming much favoured by some corners of the world that puts adequate food on the table. Although the rivers may run a bit green as a result, but hey ho.

I last cleared the willows to which we currently attend five years ago, they have done quite well in that time. While we’re on the shortages we are currently plagued by moles. and with my usual supply of troos likely to be cut off, I’ve begun a collection of pelts in order to fashion a pair myself sometime later this year, I currently have enough pelts for a medium sized thong. Yes with a nod to Davey Crocket, we are upping the trapping side of the business to keep us fully and fashionably clothed in the years to come. 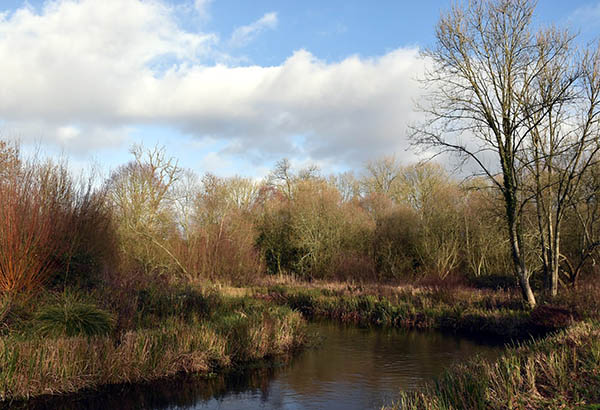 With another nod to the prospect of shortages next year, once the willows are defeated we plan to take up the planking machine once again to build a small stockade by way of increased security regarding our stockpiled stash. It will be a similar setup to the one that once existed in these parts up by the Andyke, but possibly with the addition of a couple of watch towers and an auroch or two if they can be successfully sourced. We have already started squirrelling away essential medical supplies such as ibuprofen and Lemsip, but the completion of the stockade will allow us to stockpile bulkier essential items such as large scatter cushions and yoga balls. 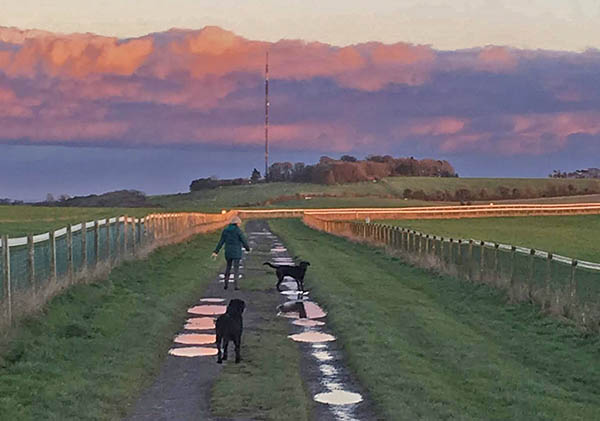 We wobbled along the Ridgeway recently, in beautiful light. Nine out of ten dogs up there are black labradors and nine out of ten of the big birds are red kites. The air is thick with the things playing in the thermals on the steeper north side. We’ve are also inundated with otters, to the extent that we see them running across the road when driving down the lane at night.

It’s the season for hanging lights, and our two dogs are the proud recipients of two blue l.e.d collars. Black dogs and walks up the lane in the dark can be a hairy business, so a couple of collars visible from space are a sensible nod to health and safety and general survival. There are a couple of other dogs in the village with the green version of the disco collars, one of whom is a mighty fine labrador bitch in season. We met up with them one night last week. 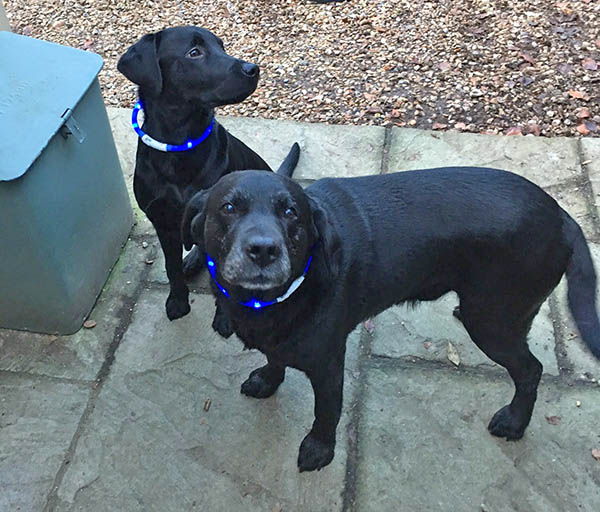 Rumination on the past twelve months has been undertaken and river reports have been filed for both the Dever and the Itchen. Extreme temperatures featured highly, something that the climate change wallahs have been warning us about for some time, although the wetter winters that they predict have yet to materialise in these parts. It may seem a bit old fashioned but we still have a man arrive to read our electricity meter and another man arrive to check our tap water.

The water man was once a lady. He tests for various parameters but phosphate levels in our groundwater supply have risen year on year, which is a bit of a worry. The draft water resources management plan for 2019 drawn up by the weasels at the water company predicts that phosphate levels in groundwater in this region will continue to rise for decades to come. I’ll say it again for the final time in 2018, we really need to start looking after our precious groundwater in this corner of England.

The electricity meter man has been coming here for twenty years or more and has a fund of tales, mostly about celebrity clients. He once knocked over a vase in Terry Wogan’s house while reading the digits. Terry was quite sanguine but Mrs Wogan was less so and a dark cloud hung over subsequent visits. He also used to read the meter at Rolf Harris’s house but says that he is no longer comfortable talking about that. I know Martin Lewis keeps advising us all to switch energy providers but I look forward to our meter man’s arrival and his epic tales of celebrity meters and I’d miss him if we switched. 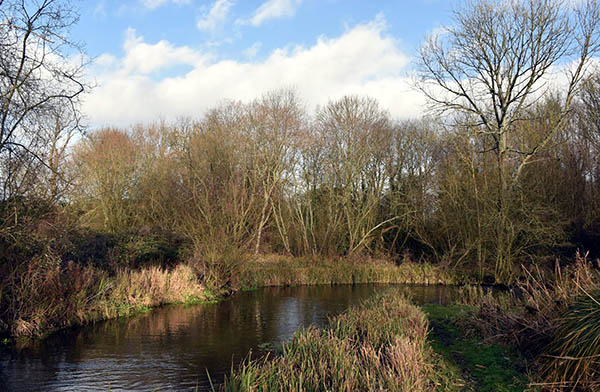 Thank you to everyone who has got in touch regarding this chunk of guff during 2008. It is always nice to hear from people, although occasionally this house receives direct messages from people who object to a view expressed, the cut of my jib in general or they just don’t like fishing. Which is fair enough I suppose, although I had a light bulb moment the other day when dealing with one of these “trolls”.

Algorithms seem to be quite the thing at the moment. I don’t know what they are beyond a book with lots of numbers used to form graphs back in the day,

Or was that Logarithms?

There was a sine, a cosine and a tangent, definitely.

No matter, it is the algorithms or logarithms that try to tempt me back to Bologna, Seville or anywhere else we have visited, or urge me to make another purchase of odour eaters with their targeted adverts in the top or side bar of some websites that I visit. They also help Amazon suggest what I should be purchasing next, and google predict what it is that I am supposed to be searching for.

So here’s the pitch, an algorithm that detects when a keyboard warrior is getting a little heated under the collar. At the first indication of a fine bate brewing, a soothing advert appears in the top tool bar, a promotion for scented candles perhaps, or just a picture of a kitten or puppy but preferably not of one chewing a kitchen chair. There was a wonderful documentary on this week about the travels and travails of Billy Connolly. A tremendous force, it ended with a gentle exhortation from The Big Yin to be more kind to one another. Wogan said the same, many times, “if you can be anything in life, just be kind”.

Trolls are an inevitable product of the wild west that is the internet, and at this point I’d like to propose another logarithm/algorithm.

One that flashes up a message as a finger moves to the send or post button, a message that reads “Is this a kind thing to do?”

Best wishes for the New Year everyone and, as ever, thanks for reading the rubbish that I write.

Where to find more….

If you enjoyed this blog by Chris de Cani that we reproduce here with his kind permission, then please do consider subscribing at http://testvalleyriverkeeper.blogspot.co.uk, or just catch up on some of his earlier blogs you have missed. They are always a fascinating insight into this part of the world and the life of the river and riverkeeper alike as well as just being a great read.

The post A Dark Office Party, Shortages and Being Kind. appeared first on Fish and Fly.