Bird of the day

They too me are the proof of global warming, 40 yrs ago I would have had to go to the south of France to see them they are common on the Tees Estuary now and have been for years as have the Avocets .

noel said:
They too me are the proof of global warming, 40 yrs ago I would have had to go to the south of France to see them they are common on the Tees Estuary now and have been for years as have the Avocets .
Click to expand...

It was minus 12 here 2 weeks ago most nights for a week, was barely 6 today, with a freezing easterly.
I did a 3 year evening course a few years ago, lead by Dr Lesley Batty- one of the Worlds leading experts on bird migration and study. His opinion was, bird species continually expand their range to test whether they can do so successfully and equally retract their range, both natural cycles, that are not always climate related, climatologists tend to link the two, but he said this wasn’t the case and were a poor indication. He may be right, many species that were common 60 years ago locally are now very scarce, similarly birds that were hardly seen then, are now very common. It’s a complex picture.
It was a fascinating course- there are 25 genetically seperate races of Canada geese across Canada and 40+ World-wide.

Been noticing a couple of changes in population numbers, here in the city...

For a good few years, you hardly heard a song thrush. Last couple of years their numbers seem to have been recovering. On a recent walk round the cycle path, I must have heard a dozen different males singing from their perches. That's definitely a big increase on recent times.

Bullfinch numbers are on the increase. It's only recently I have heard enough of them to learn to identify them by their call. It's a bit pathetic to be honest...

Long-tailed tits have probably taken over from the other tits to be the most numerous, hereabouts. It's difficult to say for sure, because they are always on the move, so one day you don't come across any, and the next, they are all over the place... but they are definitely on the increase from recent years.

And one that has been brilliant to hear again... a tawny owl.. right here, in the heart of the city.

I'm sure other species are in decline, but of course you don't tend to notice the change. As Joni Mitchell said, "You don't know what you've got till it's gone!"

Imho the worst decline have been House Sparrows- growing up in rural West York’s- Winter flocks ran into thousands and “ Sparra pie” was still on the menu, before they were protected, we have a little flock of about 12 to 18 live in our front yard, very comical to watch and very communal, the Cocks seem to carry all the nesting material.
The other species are the Hirundines, last year in our village we had about three pairs of swallows, 8 pairs of Swift and just a single pair of House Martin, this is in a rural North Yorkshire village, with pan tile roofed old cottages and wide eves, very poor numbers.
Locally in my youth the Hirundines were so numerous, when out fishing you would be hit many times a day by them, they struggled to avoid each other in flight and often clattered into your upper body. They used to fly North for the Rich insect hatches, to rear their young on, but the insect numbers are no longer here and we get too many cold wet summer days now, so most stop short of Northern Europe and breed in Spain Portugal France and Italy, where they still get vast numbers.
Greenfinches, once common are very susceptible to Mycoplasma carried by Game birds bred for release, so we hardly ever see any, but now have over 50 Gold finches come in Winter, which you never saw five decades ago.
This picture below was taken in Es Migjorn - Central Minorca 3 Summers ago, the Martins were sheltering from the short storm, every house had 100 plus under their eves, a sight once common in Britain- when the Sun comes out, the streets are swarming with them and at night the sound of swift’s screaming is deafening. We tend to blame ourselves, but a lot is just the natural cycle of our Sun and Avians responding in changing their ranges.

Hardrar said:
We tend to blame ourselves, but a lot is just the natural cycle of our Sun and Avians responding in changing their ranges.
Click to expand...

I hope you are right - numbers of swallows, swifts and martins have been well down in our parts over the last few years. As you say, insect numbers are way down, so surely that must be a big influence on their numbers, and surely the insect numbers are down due to our activities?

We also have a big increase in goldfinch numbers, and I reckon that is due to folk putting out niger seed and sunflower hearts in their garden feeders. House sparrows seem to be OK locally... 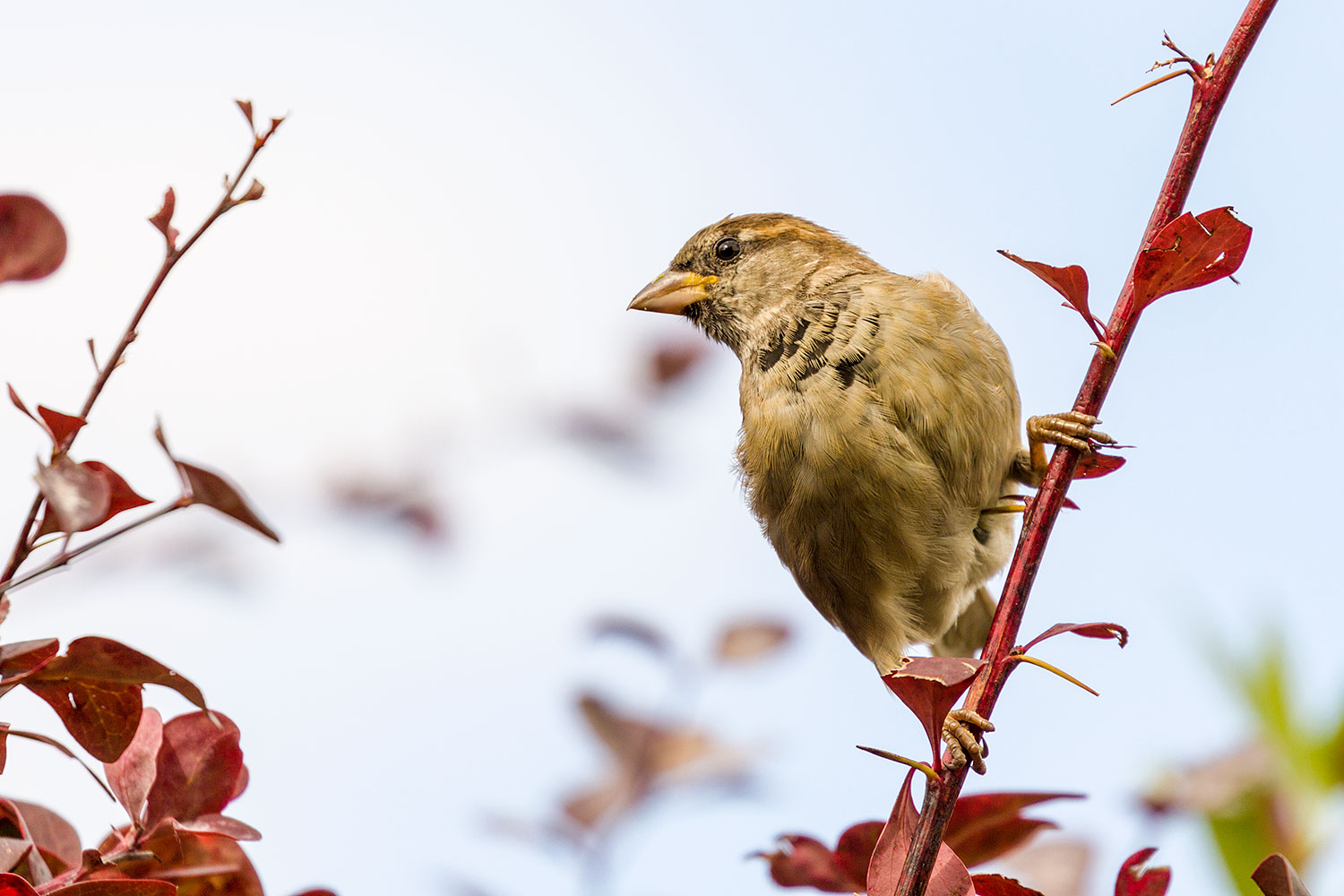 ... but urban starling numbers seem to be way down?

A few lapwings over the last few days returning to nesting areas. No oystercatchers yet.

On climate change read a bbc article yesterday that the gulf stream may slow by 35-40% by end of century. So global warming may make us a bit colder.

1st pair of Oystercatchers arrived at our loch yesterday.Spring is sprung(i hope) as above loads of Goldfinches. Plenty of Starlings here. big flocks. and large increase in Song thrushes. I also watched a couple of GS woodpeckers chasing each other round the trunk of a tree..and the GC Grebes were getting frisky.

I believe a lot of the issue with Hirundines is we no longer get the warm Spring trade winds that used to bring them up from Africa, the wind is often North Easterly now over the Spring migration period and flying against a cold strong head wind is not good, they say numbers in France Portugal and Spain are higher as a result.
Interestingly Tree Sparrow seems to have replaced house sparrows- they were very rare 50 years ago- now very common.

Back around 2005/6-ish, we were rehoused at work to a PortaKabin, on the fringe of farmland, with a boundary strip of trees and bushes between. We hung feeders in the branches to see what birdlife we could attract. We got loads, but it took about a year before we attracted our first tree sparrow. But that first one settled-in and, over the coming years, it developed into quite the colony. We ended up in the teens of numbers. Then we got rehoused in a big building and that was that, unfortunately! 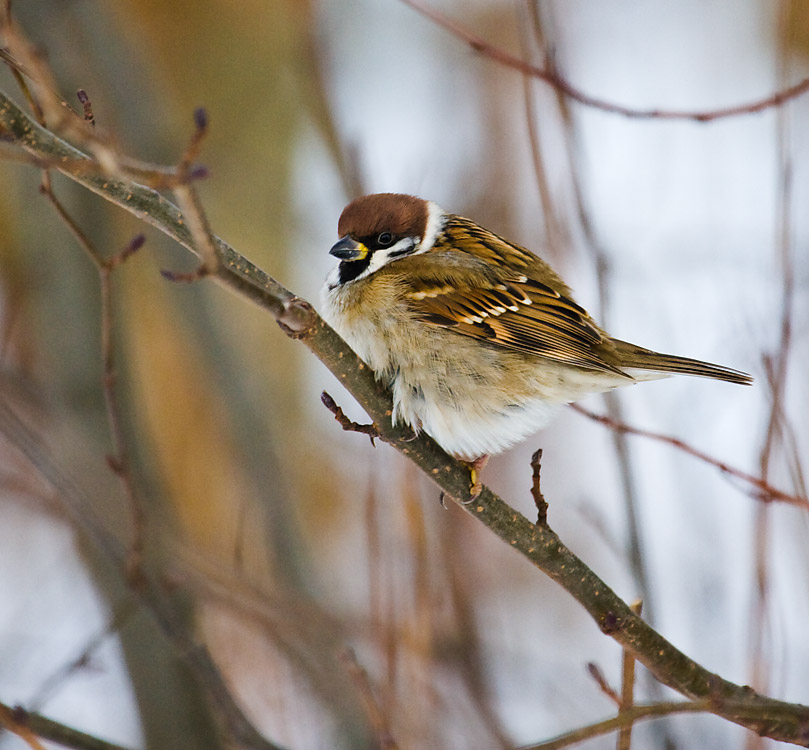 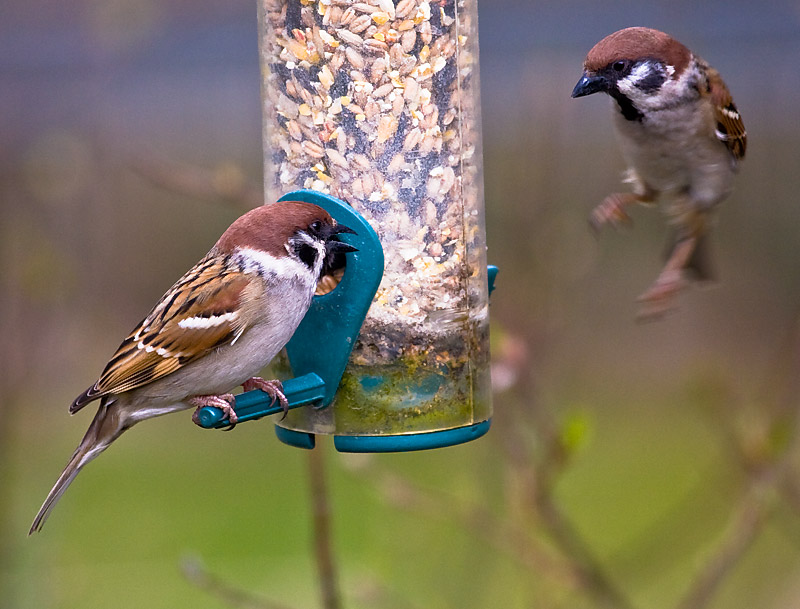 One of my favourite species- great little characters - we have a gang of them in the back- our extensive mixed hedgerows attract them. We have Siskins breeding in the garden too, they landed up today from their Wintering grounds, sometimes Gold Crests come with them too. We had a pair a few Summers back and the cock was finger tame, I think they had been on the feeders up in the forest, where visitors can park up next to bird tables and feed the birds two feet from their car window .

The trilogy of spring is back inland so spring can start.
Lapwings over a week ago. Oystercatchers 3 days ago. Curlew today.

Just starting to get the normal birds to our feeders , and yesterday met our new neighbours 4 bloody cats .

Curlews have arrived at our loch.Still 1000-1500 pinkfeet feeding on the Grass, nearby.

After yesterday.I noted about 200 pinkfeet high up heading NW over the Campsie Fells.Definately moving north.I wonder if they have picked up on the Low pressure.heading our way. With very strong southerly winds.They'd be home in a jiffy.

Location
Where the trout are

Ringed plovers have been chasing each other around on the gravel banks for the past two weeks now. curlew fly over, and the usual oystercatchers have been back for few weeks also

Today I saw two grouse on the road, more interested in themselves than me and the dog. Also saw the first Hen harrier (male) of the year.
E

Heard the red throated divers over the house the other morning and the Black throats on the loch, rightly named Rain goose, it hasn't stopped, Gales last night the Carpark is running, a few years back my son took his Kayak down there, just for a laugh, easker1

easker1 said:
Heard the red throated divers over the house the other morning and the Black throats on the loch, rightly named Rain goose, it hasn't stopped, Gales last night the Carpark is running, a few years back my son took his Kayak down there, just for a laugh, easker1
Click to expand... 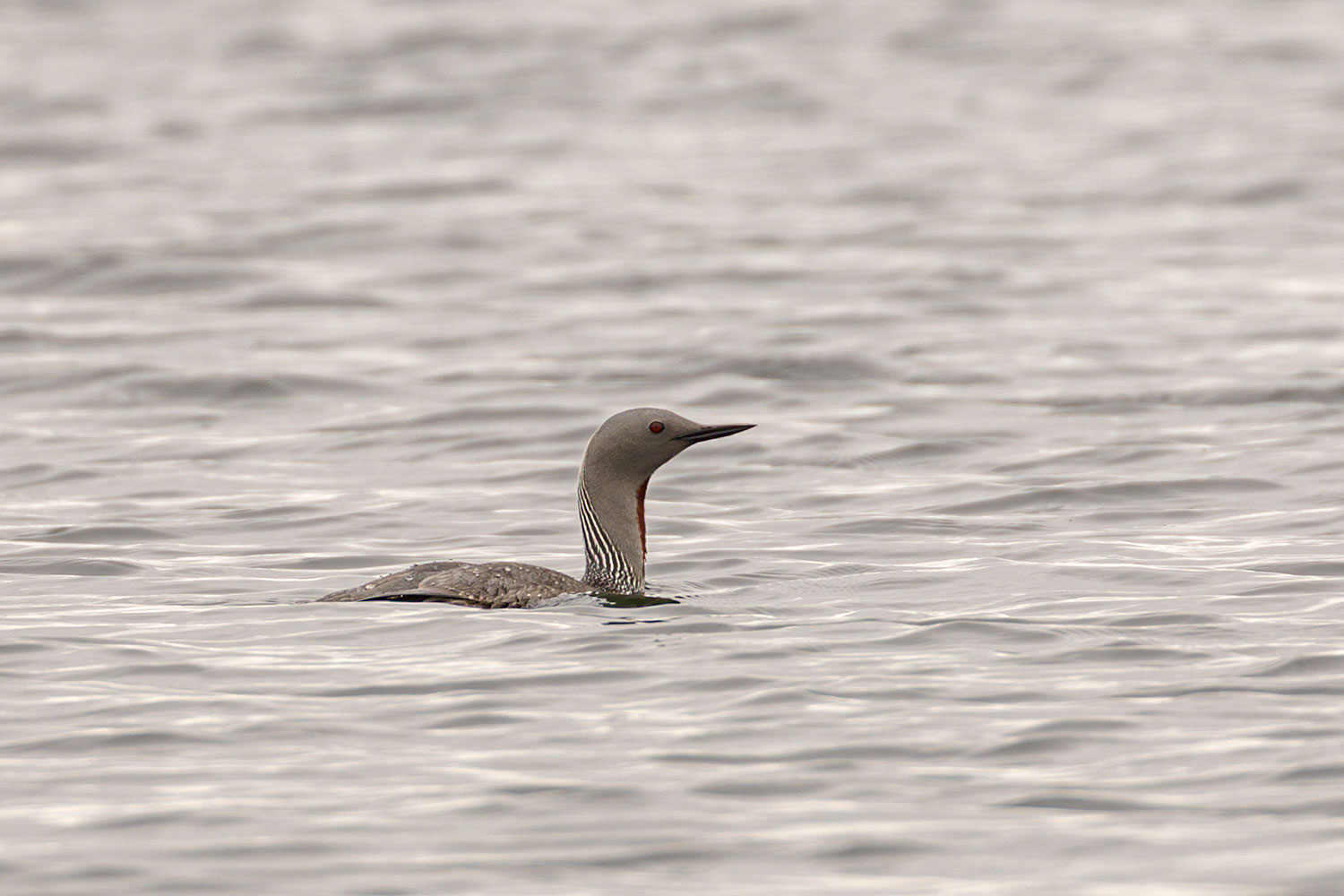 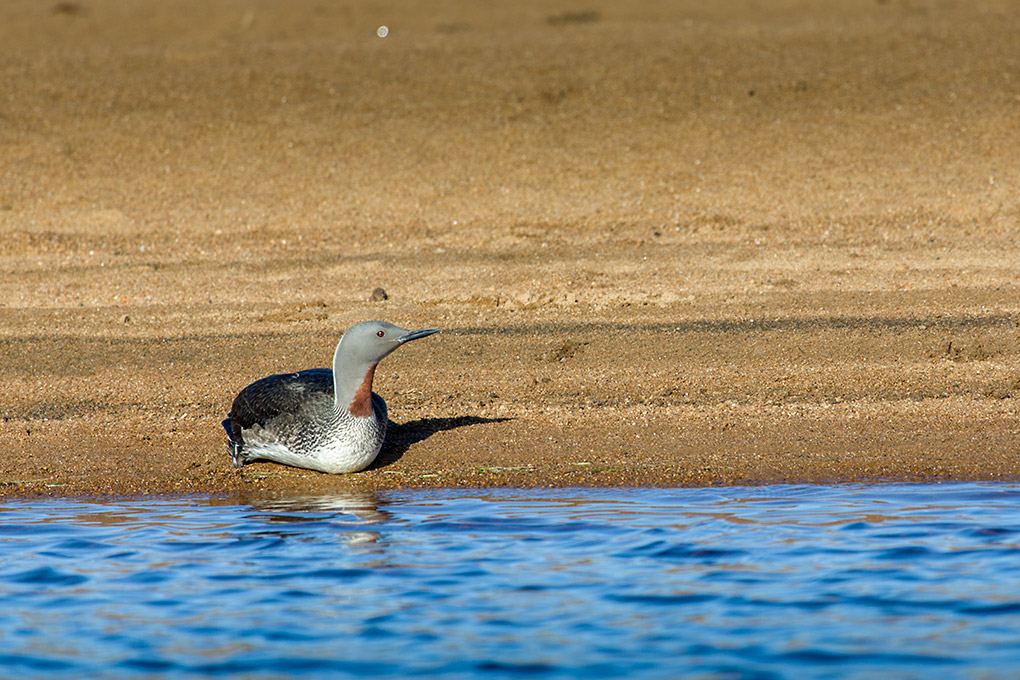 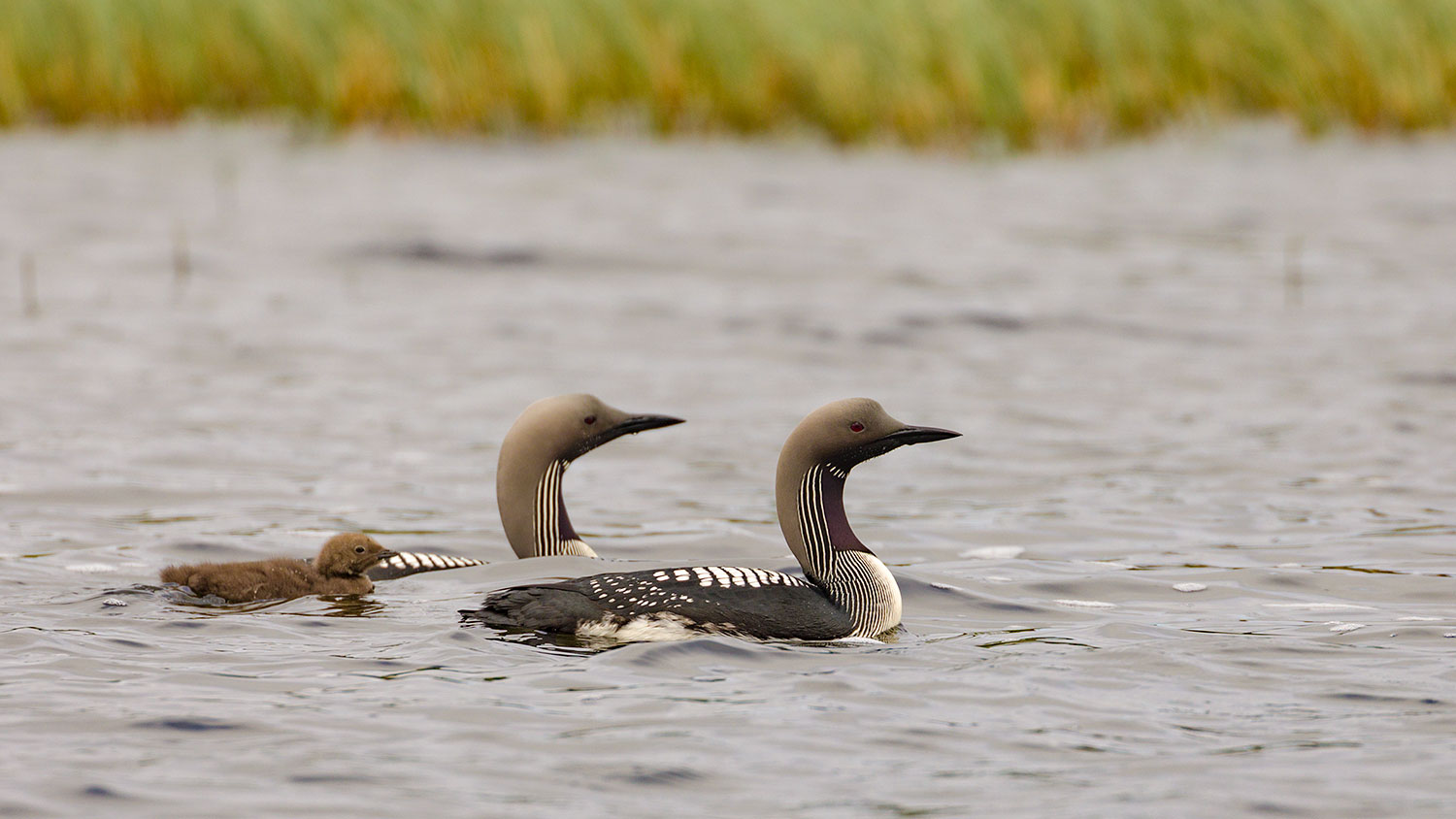 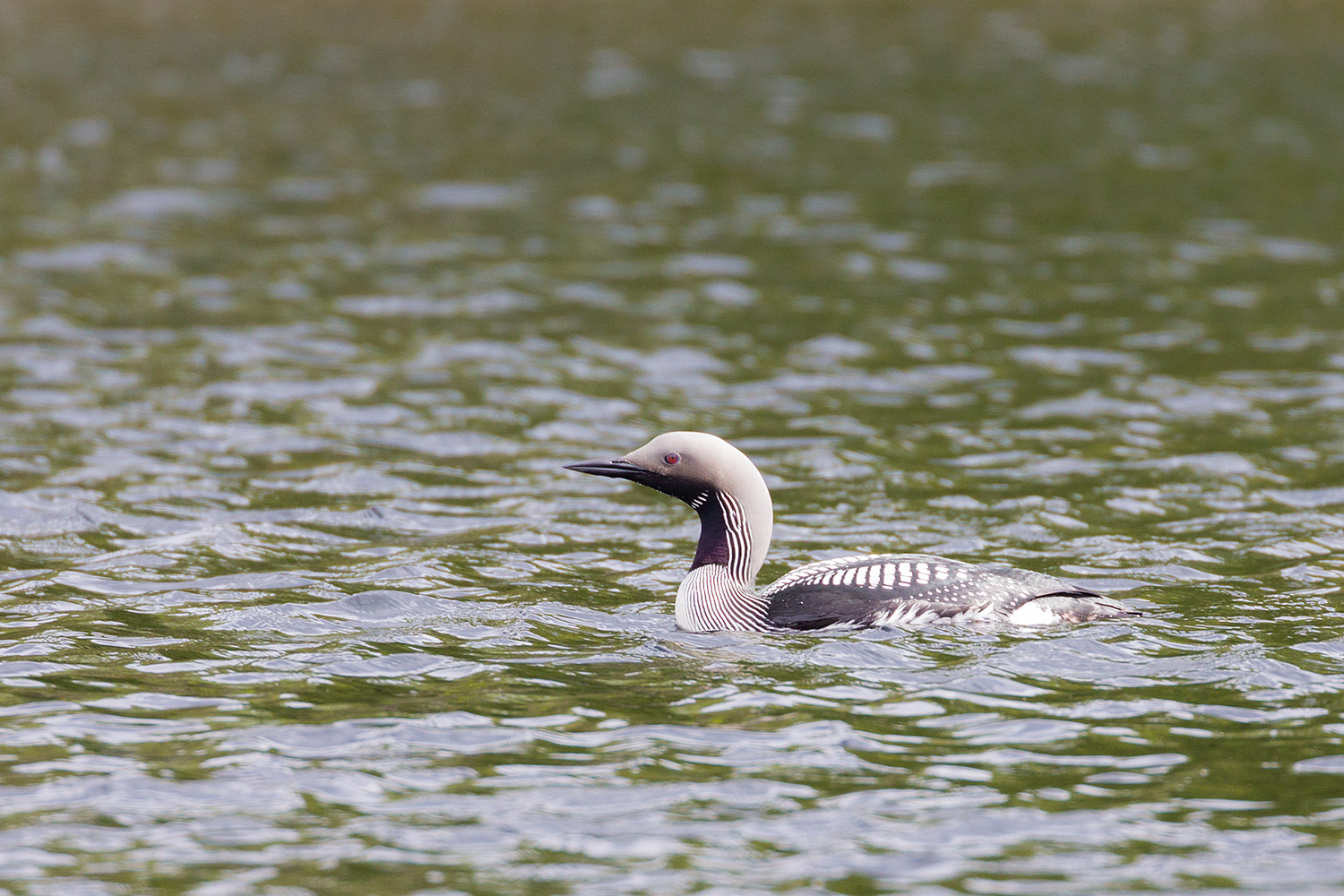 Never managed a great northern yet - though did see them on a Caithness loch in the 1980s.

A dozen house martins over the Ely at St Georges today, spring has sprung.

A few redwings appeared in the garden today. Maybe Spring is finally coming - at last!