Coping With The Lean Times

Like so many others on the Forum I'm sure, one thing I've been doing an awful lot during the last and the current lockdown is (re)watching You Tube videos and DVDs I own on fishing. I think there is a consensus amongst us that Whitehouse and Mortimer progs have been quite delightful. Of course, they are aimed at a more general audience and have been immensely successful in attracting such a loyal audience, so much so as to commission new series and hopefully future series. But as anglers we cannot help focusing on the fishing dimension of their programmes. And sometimes Paul and Bob blank. They have a great fishing brain in the form of John Bailey behind the scenes choosing lovely locations but despite that even someone as competent as Paul Whitehouse cannot summon up a fish when everything looks so perfect. And similarly in other fishing videos, despite the wonders of editing, some of the fishing "Gods" fail. Now not out of spite but out of empathy I suppose, if you are like me you might enjoy such moments, because my first instinct is - "well it's not just me then." Just yesterday I watched an interview with Stuart Foxhall online. Apart from being a great fly tyer, Stuart is a very experienced and successful salmon (and steelhead) angler. But on a recent trip to the Spey on a top beat in very good conditions Stuart admitted to the fact he blanked for first part of his week.

So that got me thinking how fellow forum members cope with the "lean times?" Not just when conditions are clearly against you, though that is always a factor to take into account, but when also when you seem to be doing the right things in seemingly decent conditions but all for little joy in terms of catches.

Presuming you are fishing in quiet, pleasant surroundings, then just enjoy being there.
If you were guaranteed not to blank I think it would dull the satisfaction when it all goes to plan.
After this lockdown it will be great just to be fishing, catching being a bonus.
M

I would add that there is a major difference between trout and grayling fishing one the one hand and salmon fishing in the other. Sadly in the latter the"lean times" is an all too accurate way of describing salmon fishing in general, as despite some upturns, runs have generally declined steadily imho. In the case of Stuart Foxall above other anglers on the beat were catching when he wasn't. He (and his mother who he takes fishing - quite wonderful I thought) kept their calm and followed the person's advice who knew the beat most - the ghillie. From mid week-onwards their catch rate improved dramatically. But advanced booking for salmon can often mean you take the conditions that are there when you turn up. Then the test of your character begins. I have a friend who is a pretty decent salmon angler and I see much of his success deriving from one character trait above all else - he is single-mindedly persistent.

With trout and grayling we know our rivers well and we know the fish are often there when times are tough. But there can crucial "light switch moments" when something happens to the river which affects the metabolism of the fish, dramatically disinclining them to respond to our flies. Water releases on the Welsh Dee can have such an effect on grayling (and trout) - sometimes killing the sport dead. Not knowing this in advance you discover it after a long journey to the river trying to making the best of it, but often to no avail. You are inevitably disappointed but I never beat myself up hoping like poor refereeing (or VAR) decisions in a football match, that these things even themselves out over a season.

When there is no such "light switch" moment or event and the going is still quite tough then, as I see it, it opens up opportunities for different tactical approaches to try and turn things round.

The "light switch" moment when fishing for grayling on the chalkstreams usually happens at around 3pm. They just shut the shop. I don't know why and a respected member of the Grayling Society told me he thought that maybe they were just full up!

Whatever. It is not a good idea to linger over lunch in the autumn/winter when fishing for grayling on the chalkstreams.
J

The reverse to what Bob describes seems to happen in winter stillwater fly fishing. My experience on several Wessex fisheries has been that there's no point in starting the fishing day in winter much before 9am because nothing will happen early. But then around 9:15am you see a fish move, have a take or, praise be, catch a fish and you are away. I have a pet theory that this is to do with winter light levels, and as both trout and grayling are sight feeders maybe declining winter afternoon light causes the grayling to shut up shop ?

I've seen a few lean times in the past few years at work. Some are just a few weeks but last season, on top of everything, we had a two month drought in Caithness and the river dwindled to almost nothing. On the one hand it is hard, even dishonest, to be over-enthusiastic with a newly-arrived party about our prospects when you know that the vast majority of fish have 'switched off' and that's heartbreaking week after week, knowing how much time, money and expectation the client has invested in his holiday - perhaps his only holiday of the year. So you have to deal with tempering their possible disappointment by suggesting 'plan b' options once familiar casts have failed.

What came out of it for me was an opportunity with my more adventurous guests to try tactics and areas which would normally not be fished and I feel I learned a great deal this year about 'problem weeks' and how to beat them - or feel satisfied you tried damned hard! Their tenacity with unfamiliar methods and the collective experience of my colleagues, freely shared, gave hope and purpose - and some successes - to what where often pitiable salmon fishing conditions.

So, I guess in short I'm saying, 'tricky times demand a change'. If what normally works doesn't, experiment.

If I'm on my own and things get dull I'll focus on casting practice and using my 'wrong' arm. Or, often enough, just sit in contemplation.

With no game fishing close to home, I have to travel to fish for Trout.

On the occasions when I am to stay away for a few nights, I have a small selection of favourite venues.

Most of the locations give me a good chance of catching each day, and at at least one of them I consider it a very poor day if I didn't catch at least a few fish.

One of the venues however (and I won't name it) I know I am likely to blank 3 days out of 4 (bear in mind this is Trout, not Salmon fishing).

Why then, do I bother going back to this last venue year after year?

I would guess there are a few factors: I like the accommodation, I love the countryside, I associate it with pleasant memories.
I am happy to while away days on the bank, losing myself in the rhythm of casting, letting my mind wander.

There was a time when the Deveron had a monster flood ,spent a day with a maly and a good novel.
hardly left my armchair for the day !

I guess the advantage of a bit of competition is that you know when other people are finding the fishing hard. I'd like to go with a partner more often so I'm not second guessing whether a hard day is down to me or not.

It can happen a lot with salmon or sea trout....either the fish aren't there or they have gone stale and won't look at a fly for love or money. If I know there are fish in the pool I would experiment a bit with big/small flies, surface lures or monkeys etc. If the lean spell continued for a while, I would go after bass, trout or grayling instead.
F

One learns with an awful lot of patience sometimes about levels of possibilities versus degrees of probabilities.....and then have patience with one's learning . Not hooking a salmon when they are all around you when you are a beginner for example. As a teacher one tried to impress upon students the importance of understanding oneself and learning to how to learn learning in partnership with that.....so to speak. A lot out there re learning theories....dissonance theory ...Kolb...learning styles.. types of personalities.... types of intelligences ....52 cognitive sabotage thingies...experiential learning etc. That sort of stuff was not around when I was young. Thank goodness dad and I went fishing.

Obviously there are times when the fish do not want to know but I would be aware to dis regard fishing dogma. Caught plenty of salmon in super high water conditions were others look at the sepa water level website and turn on the TV. You need to change your approach and target slower runs at the backs of pools.
This summer was a long drought that made the fishing difficult. Experimented with upstream salmon nymphing. Never seen anyone try it on the river I fish; but felt there was nothing to loose. There was enough response from the fish for me to pursue it this season in higher water conditions this season.
If it is not happening on the loch for trout and I am bank fishing I'll get in the car and head for home. In the past maybe a change of loch would have been tried, but if it is not happening it's generally not happening a couple of miles away IME.
H

I think 'The Anglers Song' by William Basse puts it pretty well. 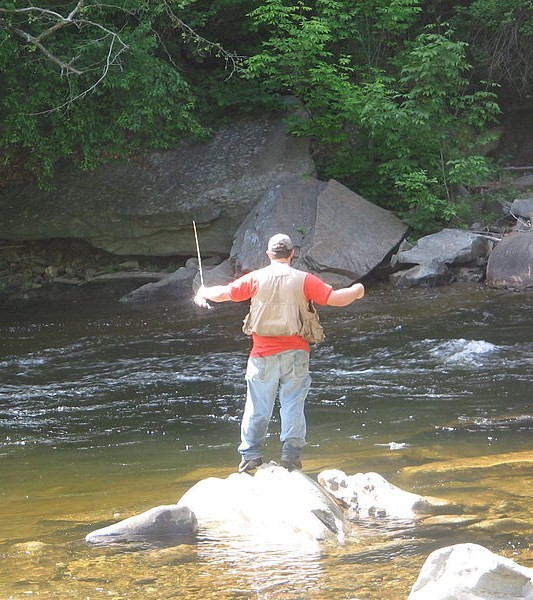 Other poems by Basse