Yesterday I fished Vyrnwy for the second time this year. Went out from Whitegates and although the weather did not seem like ideal conditions the fish were feeding all day. Sunny spells in the morning, cloudy and cold with light rain showers at lunchtime into the afternoon and then it got very cold, windy and wet into the evening. Ended up with 25 browns of which the best was about 1/2 lb and two rainbows. Also lost three rainbows (at least I think they were judging by the fight) and on two occasions there were two browns on one cast. The best spots where Fynnant, Llwyn Rhiw and about four metres out from the back of the boats at Whitegates.

Some of the fish caught

The hot spot at Llyn Rhiw

Also spotted a tawny owl in one of the nest boxes on the bank and a fox sunning itself on the point at Llwyn Rhiw.

As grayling4 said in the old thread; the batteries are remarkably good and the surroundings are spectacular.
Last edited: May 2, 2018

I should've been up there at the weekend rather than Claerwen.... well done chaps.
M

richfish1 said:
I should've been up there at the weekend rather than Claerwen.... well done chaps.
Click to expand...

Having read the latest catch returns, I would say that it's certainly picking up now after the cold winter.

Oh yes, found these in the boat I took out yesterday.

mike_hayes said:
Oh yes, found these in the boat I took out yesterday.

Not seen that fly pattern before!!
Click to expand...

Must've been a hard day!
M

Hi richfish1. Spotted your Vyrnwy Varmint post earlier. How do I get some of those? Haven't got the patience or the eyes to tie my own but I reckon they'd work well for me.

mike_hayes said:
Hi richfish1. Spotted your Vyrnwy Varmint post earlier. How do I get some of those? Haven't got the patience or the eyes to tie my own but I reckon they'd work well for me.
Click to expand...

PM me your details Mike, and let me know what sizes you're after and leave it with me

Went out yesterday from Whitegates on a breezy and sunny day. It was warm but it turned colder later on when the sun dropped below the hills. The wind was blowing up from the damn allowing for some good steady drifts especially from Llwyn Rhiw and into Eunant bay.
Connemara Black, the faithful Dunkeld, Richfish's Vyrnwy Varmint and Claret Bumble on the DI3, plus Diawl Bach on a floating line accounted for 18 browns to 3/4 lb and 1 rainbow at 1 1/2 lb. Lost quite a few especially on the floating set up.
The majority of the fish were found lurking in the shade amongst the bankside rocks and 5 - 15 metres out from the edge about two metres below the surface. If you're heading up there, the water level is roughly 3 - 4 ft down.

Some of the fish caught:

and a Lake Vyrnwy sunset to end what was a most enjoyable day's fishing:

P.S John Davies - if you're reading this it was a pleasure to meet you.
M

Thank you Rich, the Varmint worked. Four browns agree with me.
Last edited: May 23, 2018

Some lovely fish there Mike, glad the flies were useful

Went out last Friday from Whitegates in glorious sunshine with a cold, steady breeze blowing straight down the lake towards the dam. The water level was 5' down (at least) and I would imagine with the current weather that this has dropped further. The fishing was a bit harder than normal however the fish were there lurking in the shade or deeper down:

In the afternoon the weather warmed up and so did the fishing with many fish starting to rise. By evening the fish were rising everywhere. Finished the day with 3 rainbows to 2 lb - all taken with a Soldier Palmer just below the surface and 16 browns to 1/2 lb - the majority of which were taken with a team of red buzzers!!, plus a couple on a Kate McClaren fished deep. Some fish:

Interesting day's fishing as I've not really had any success with buzzers on Vyrnwy before.
G

Thinking of going up to Vyrnwy Sat 1st September but don't want to go if the water level is really low. Any idea what level it's at currently?

Have been a couple of times since last posting and the water level has been getting lower each time. The fishing has also been a bit tough far fewer fish than previous reports. Considering how hot it's been the lake is nowhere near as low as 1976 drought levels and there has been some rain in the area since, so the levels and fishing may have recovered a bit. Went out 18th July on a very warm day and caught 8 browns plus a chub.

My daughter and I were there on 3rd August when the water was very low and the top end had all but dried up. We still had 13 browns between us. We also spotted what we believe was an otter.

In my opinion the fish are there; either out in the middle of the lake using lures - Mrs Simpson or Viva, or by any steep, rocky banks using black flies - Connemara Black or Black Pennell. Will be going out last week of August and will probably choose the boathouse end and deeper waters.

After two months of no fishing I finally managed to get out yesterday for what will be my last trip this season. The weather conditions were, in my view, perfect; a couple of warm days after a cold, wet spell and ESE winds on the day blowing from the Dam stright down the lake to Rhiwagor at the other end. After finding the only two boats left on the lake I set off from a very dry boathouse pool to a mist covered "mill pond" that was experiencing one of the most spectacular trout rises that I have ever seen there.

They were everywhere. For about an hour I threw nearly every thing in the fly box at them until I tried a gold bead pheasant tail nymph which took two fish in three casts. One of these virtually caught the nymph as it hit the water. This sport was suddenly interrupted by a group of rather noisy canoeists setting out from opposite the hotel and the RAF turned up. At the same time the forecast ESE winds arrived so I set off into a very long drift down the lake to Llwyn Rhiw catching (and loosing) fish close to the shore. At one point I beached for a cup of tea and noticed hundreds if not thousands of hatched larval tubes floating by the shore. These must have been what the fish were rising to earlier.

In the afternoon I switched to the opposite (and much warmer) bank and spent the next three hours fishing up towards the tower. I caught a number of fish in the foam lanes near the shore on my intermediate set-up.

Ended the day with 17 brown trout to 3/4 lb and a rainbow around the 2 lb mark. Flies that caught; Dunkeld on intermediate and DI3 lines, Connemara Black and Claret Bumble on DI3 and Gold Bead Pheasant Tail and a Black Buzzer on floating line.

Some of the fish:

I just had to add this image.

Looks like a brilliant place, can't believe I've never been before. I'm planning a trip for early season next year. Is it likely to fish well in mid April or is it worth waiting for a few more weeks?

Also does size of the fly play a role or will I be ok with my usual size 12's? As it'll be my first time at the place, which areas are best to focus on?

I've contacted the hotel for a copy of the book

Thanks for the message. It is a very nice place, spectacular views and often produces. When to go? Well it can be good from the start of the season (weather permitting) but as soon as spring sets in there are plenty of fish to be caught. April and May are good months and I always aim for at least one trip in the second half of April. If the water level is up I would recommend going out from Whitegates and explore the shallow top end. If fishing away from the top end, stick to the banks and where the water level allows try casting under and between trees.


As far as flies go, size 10 - 16 should be fine. I always include a Bibio on my set up early season. However for a non-Mike bias view of tactics it is well worth reading the book and there is also a couple of years of catch returns published on the hotel website which although they stopped a few years ago they are still good for what to use. These can be accessed here: Catch Returns | Lake Vyrnwy Hotel and Spa Blog. Of course there's plenty of Vyrnwy posts on this forum which are really useful.


If you don't catch many fish I'm sure you'll enjoy the spectacular surroundings.

​
I'm sure there are others reading this who can also offer advice.

I've emailed the hotel about buying a copy of the book but no reply yet. I have most of the patterns mentioned here but there are one or two that I'll have to add to my box in the meantime. Sounds like the Dunkled does well for you, do you fish it on the point?

I've emailed the hotel about buying a copy of the book but no reply yet. I have most of the patterns mentioned here but there are one or two that I'll have to add to my box in the meantime. Sounds like the Dunkled does well for you, do you fish it on the point?

Phone the hotel to chase up the book. The Dunkeld that works for me is a Jungle Cock version similar to this one (damn, there goes my secret):

Fished on the point with a slow retrieved sinking line or top dropper on a faster retrieved Intermediate.

The Good old Wickhams Fancy will take it's fair share on Vyrnwy too. And anything Black 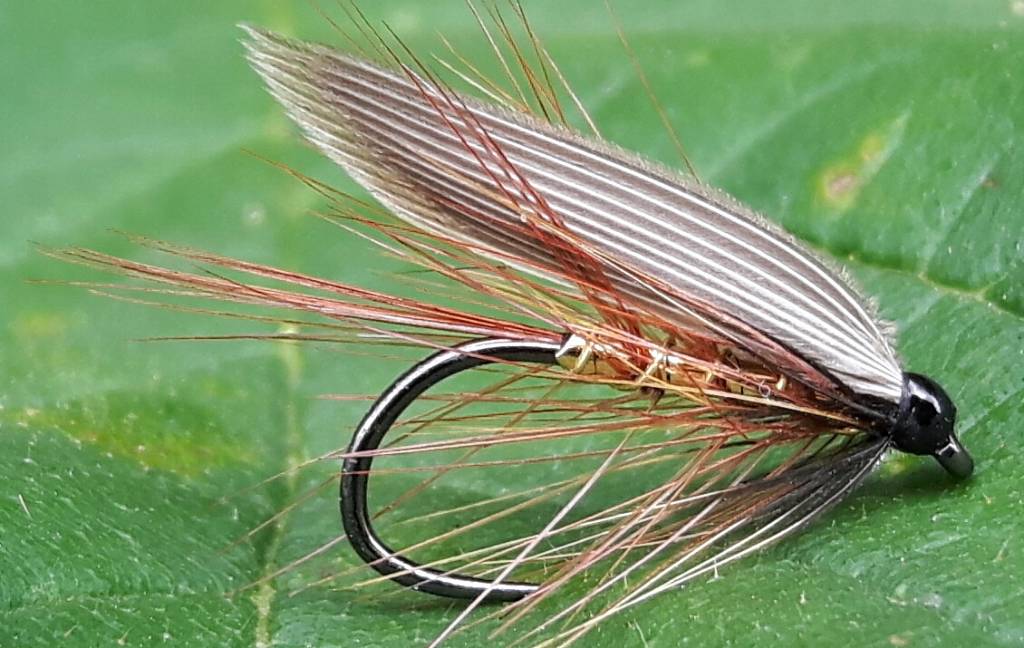