Andy (Boorod) mentioned when he put up his excellent photos from Buchanty last Friday that he was not alone. I was one of about a dozen others, all trying to get one of the key spots to get good shots. There really only is one, and a guy shooting video was there when I arrived it and he hogged it for over half the day.

I got in looking across the top of the falls, but you don't see the fish that don't get up above the lip at all, and those that do, you see them late, so you only have a split second to fire the shutter at them before they disappear. It takes about an hour of shooting nothing at all until you get your reflexes trained enough to catch an odd one.

Late in the day, the key spot was vacant, and I took the chance to move there. I had 15 keepers from being in the first spot for 5 hours, and 18 keepers from being in the second spot for one hour! That was 33 keepers from 1021 frames. The rest either had no fish in them or they had an out of focus fish in them. Even some of the keepers aren't quite in focus, but I lowered my acceptance a wee bit due to the very low success rate on the day. The fish are superb at winding you up. You'll be focusing on the middle of the flow, waiting for a fish to jump there, and you'll see one at the back, then another at the back, then another... So, you refocus at the back, and the next one jumps at the near side... then another near side fish... and another... So, you refocus at the near side, and the next one jumps bang in the middle... followed by another... and another... Aargh!

A lot of them were going 'back wall' on Friday. The north side of the falls is a solid rock wall and a lot of fish were making a total mess of their jump and slamming into the wall. Frame 3348 shows a fish that head-butted a crevice in the wall. That was a neck-breaker! I have doubts about that one's survival! Although the sound of the water is really loud, you can hear the slap of the fish against the wall.

It was also a good day for them getting up. Some days in the past, it seems like every fish is failing in its attempts, but on Friday loads of them were getting clear of the falls. Some were jumping the falls, and some were simply swimming up - you could see the black backs going through the spume. The key to a good jump is to time the take-off from the right spot. Don't go early but get close to the base before jumping. The ones that go early and give it big air tend to land half way into the falls and just get swept back down. However, on Friday I saw the Bob Beaman of salmon. He went way too early - so I thought - but his jump had so much height and length that he cleared the falls and landed well over the lip of them and skooshed on away up. Very impressive!

Camera, a dSLR mounted on a monopod and fitted with a remote release cord. This allows me to sit comfortably for long periods, with the monopod supported by my right hand and my left thumb on the remote shutter release.

Lens - 85 mm f1.4 prime. The faster the glass, the better for this game. It's a shaded spot and light levels are often low - and shutter speed needs to be as high as possible. The purple and green colour-fringing on this lens is dreadful though!

The lens is in AF mode, but I use back button to focus. This means I set the focus where I want it by picking out the water at a certain distance from me and that doesn't change when I press the shutter button. This relies on a fish jumping at the chosen distance to be in focus. There might be a better way, but so far I have not found it!

The photos from the upstream position... 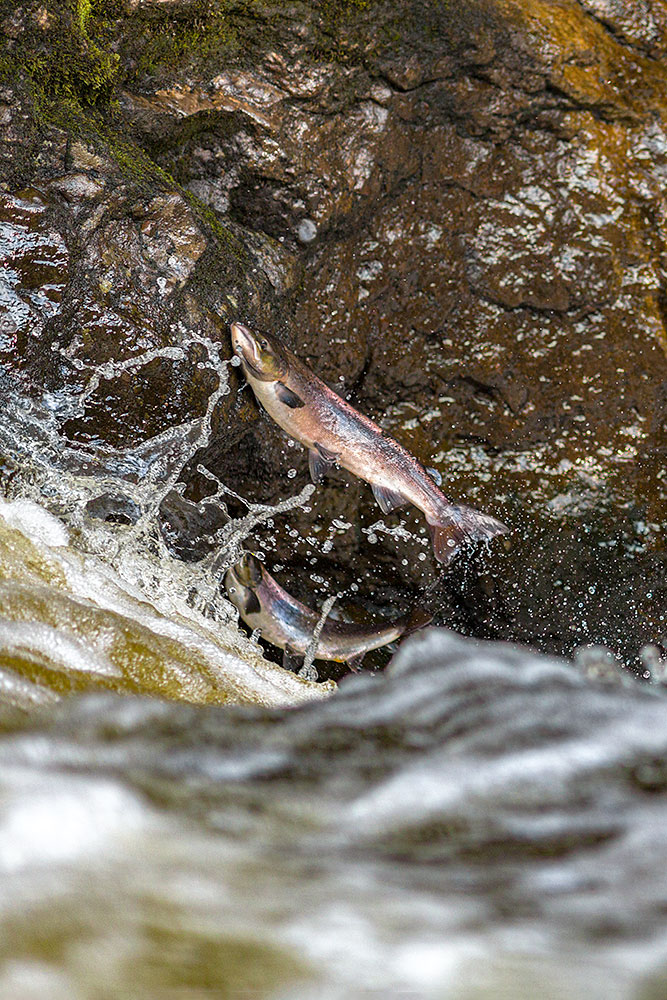 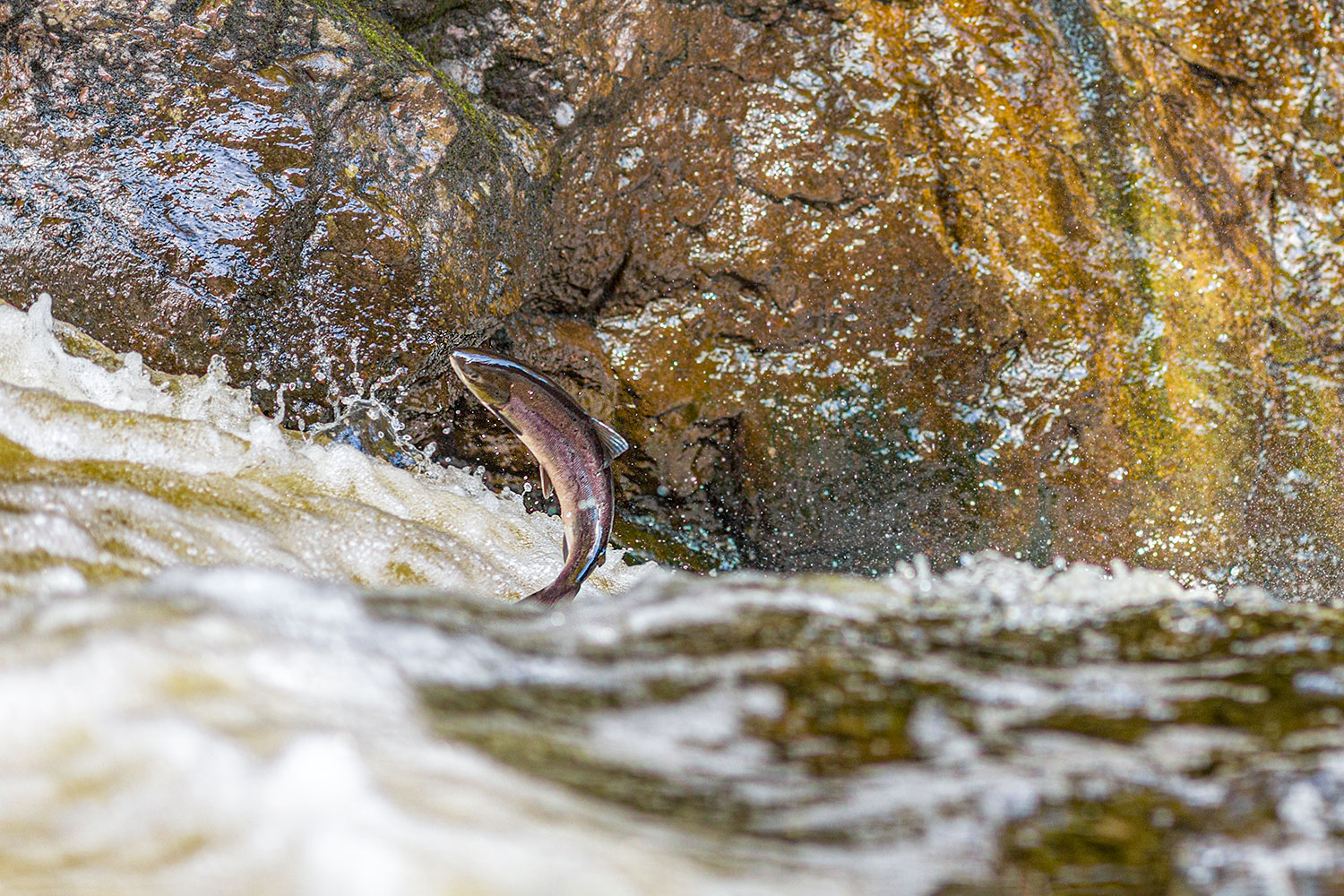 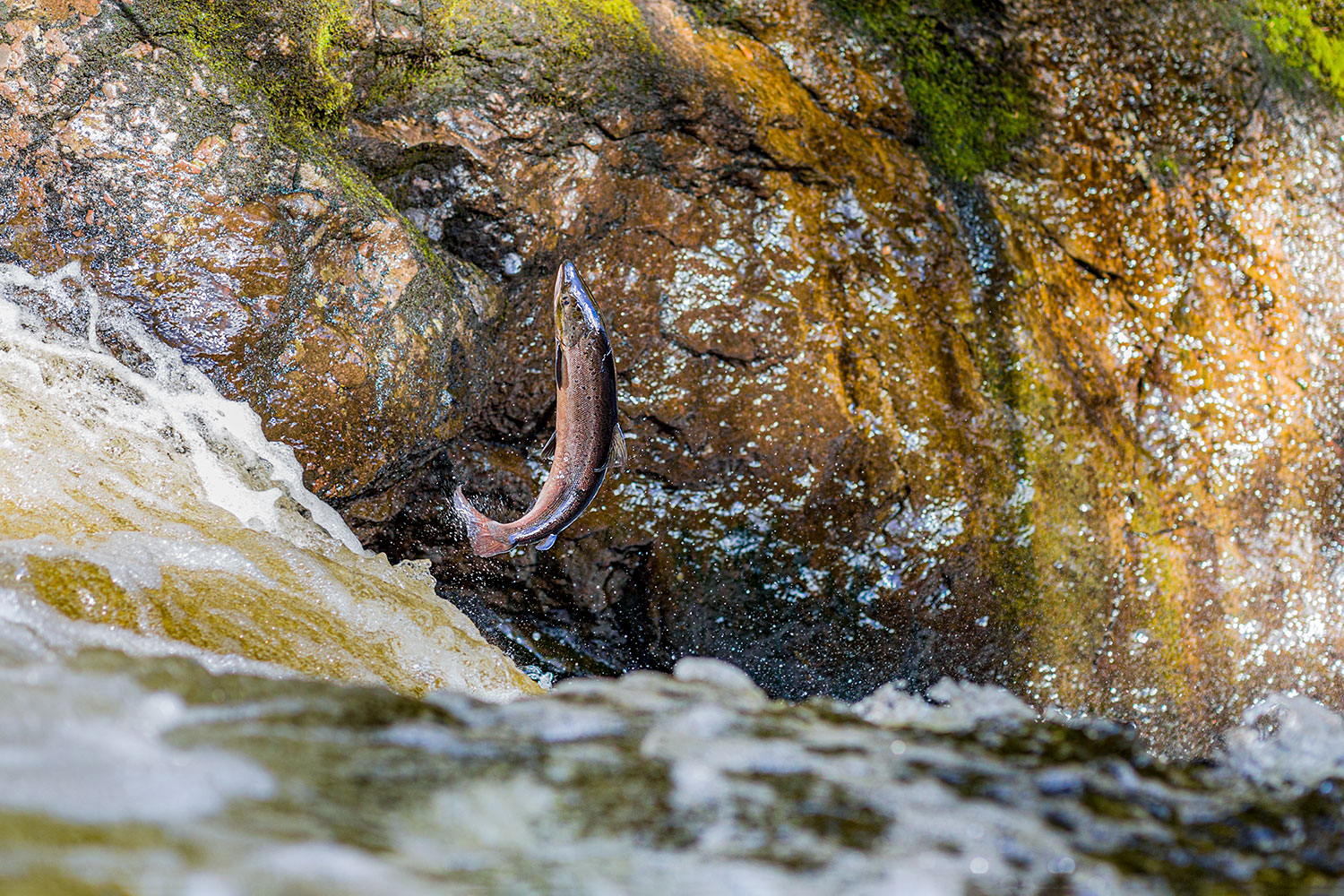 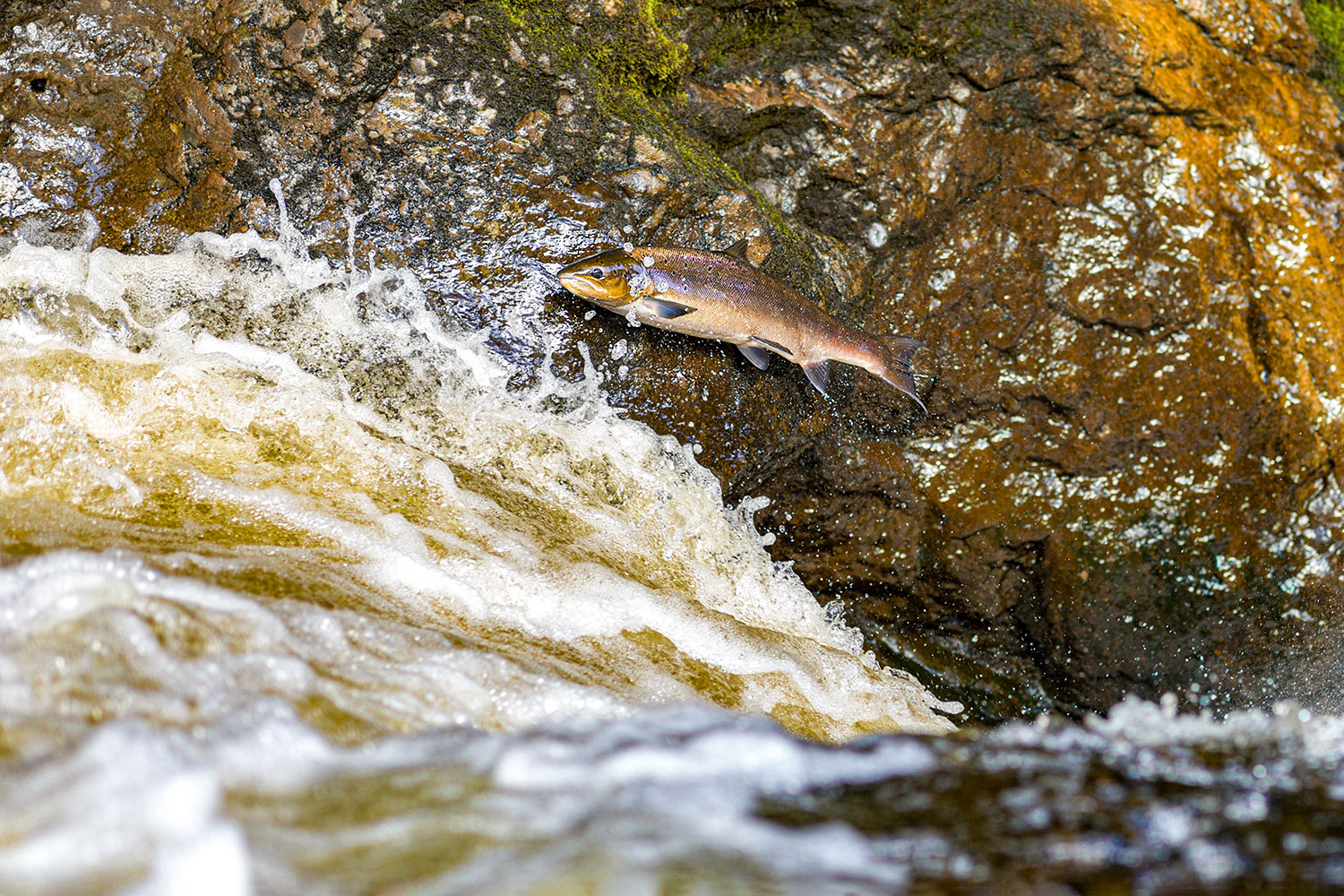 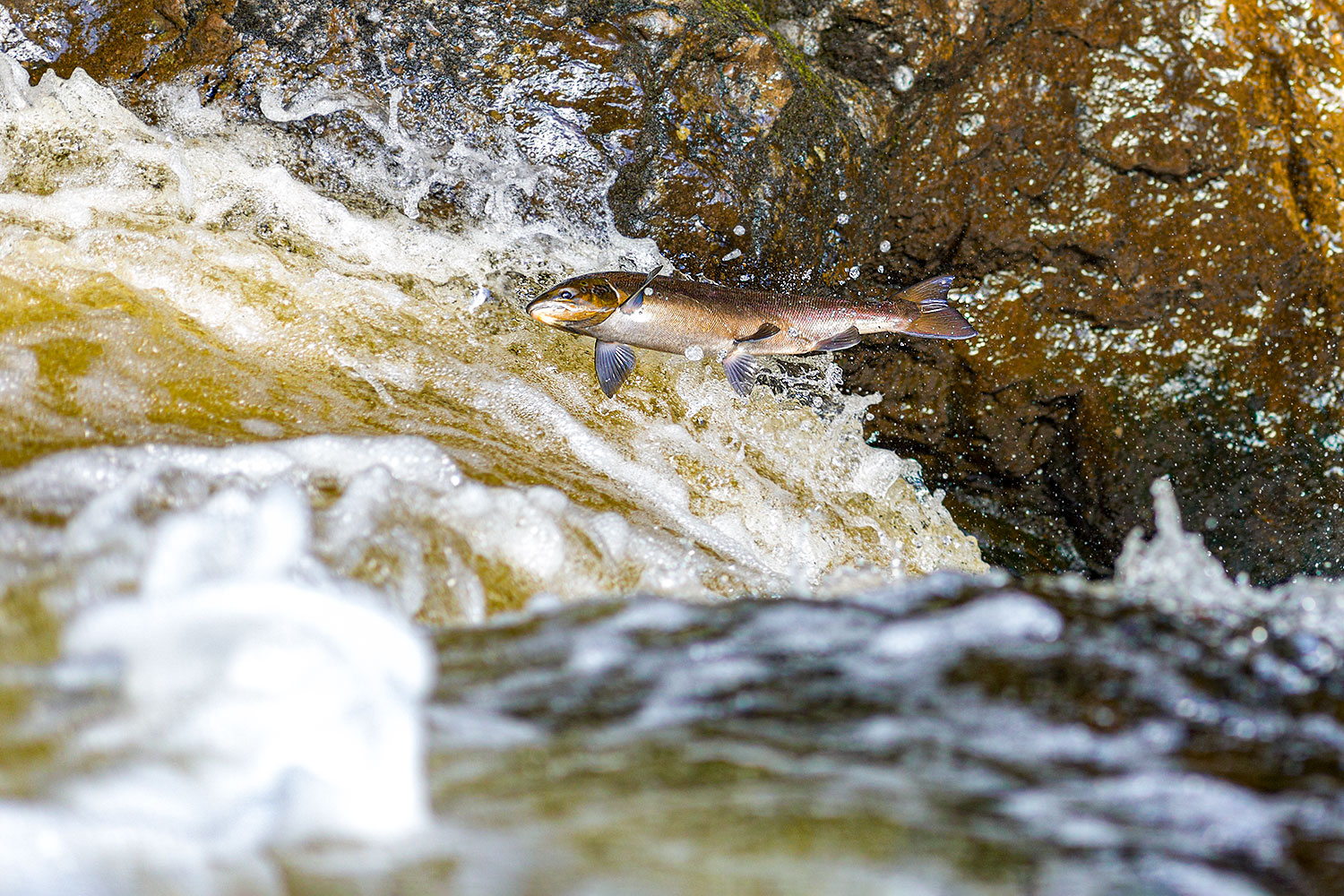 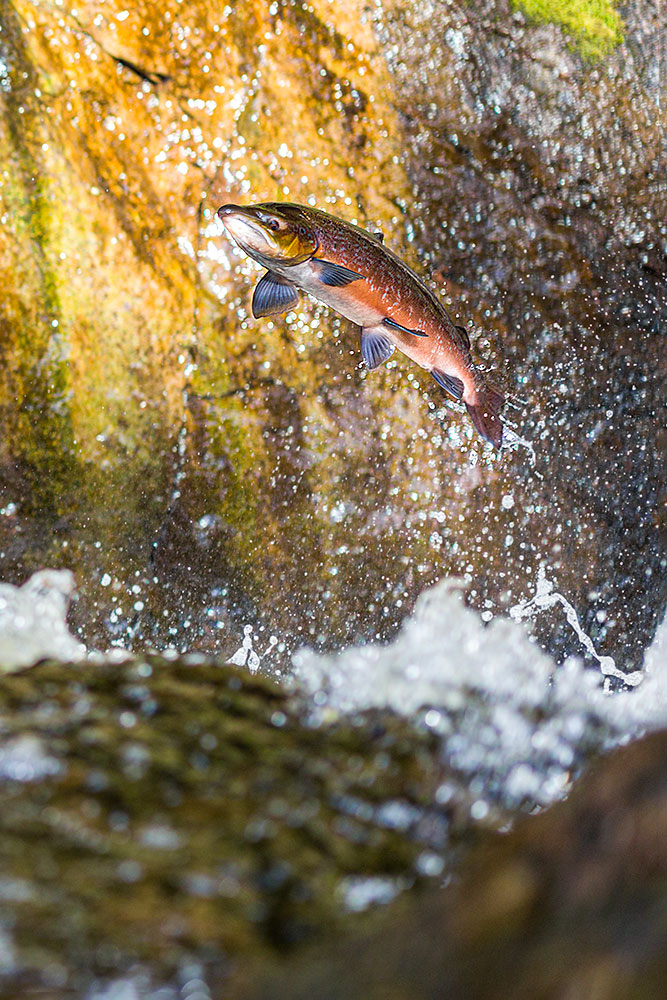 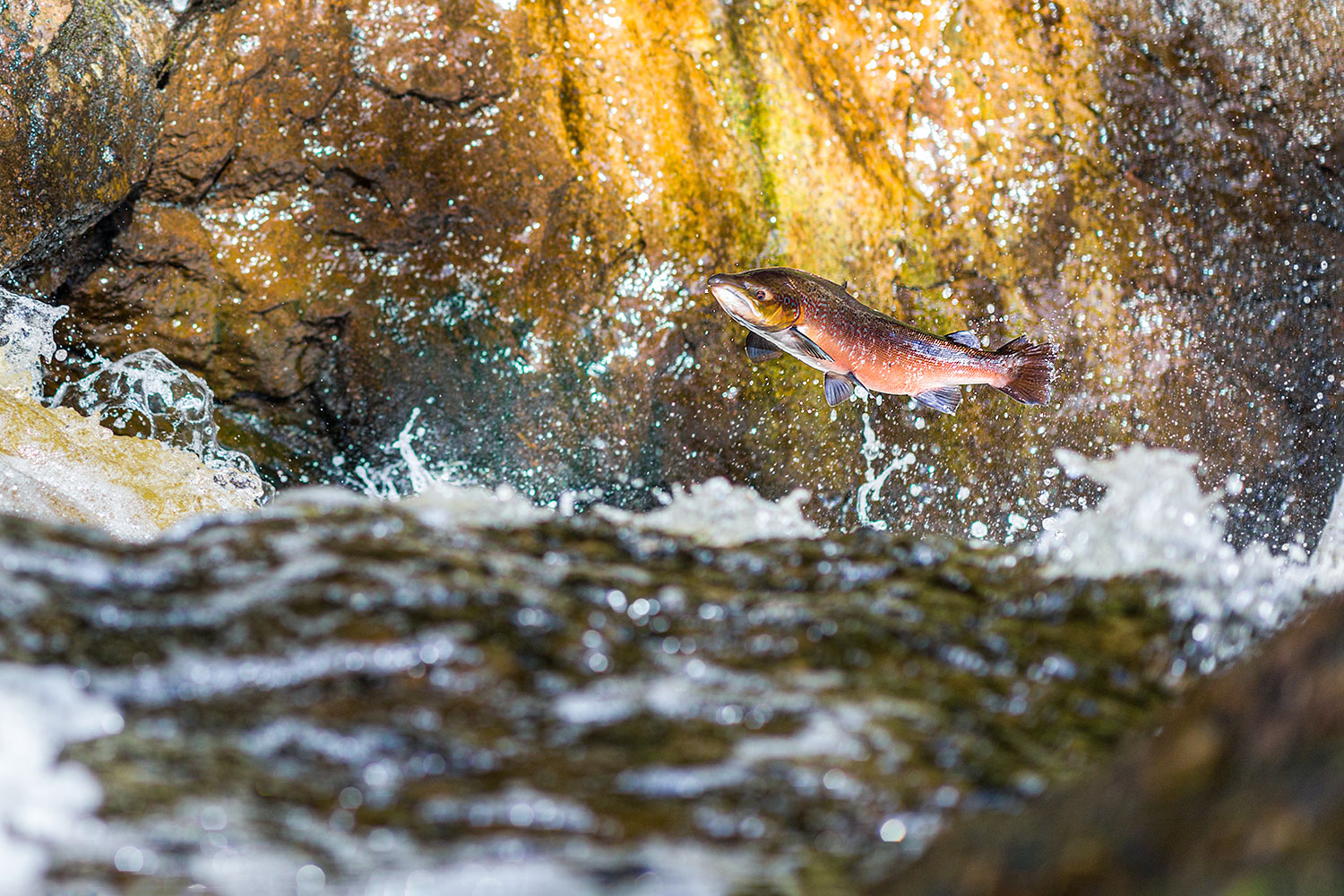 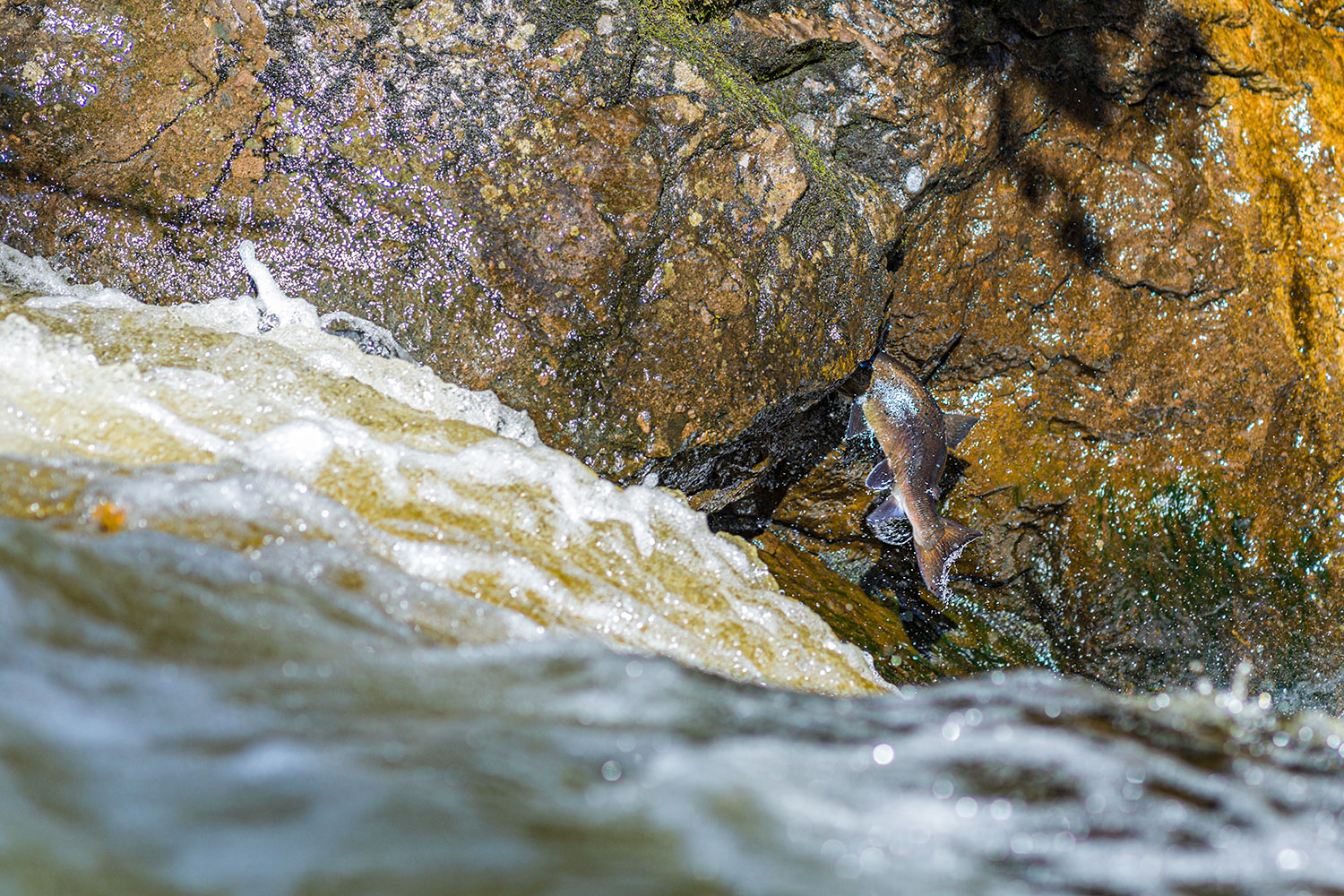 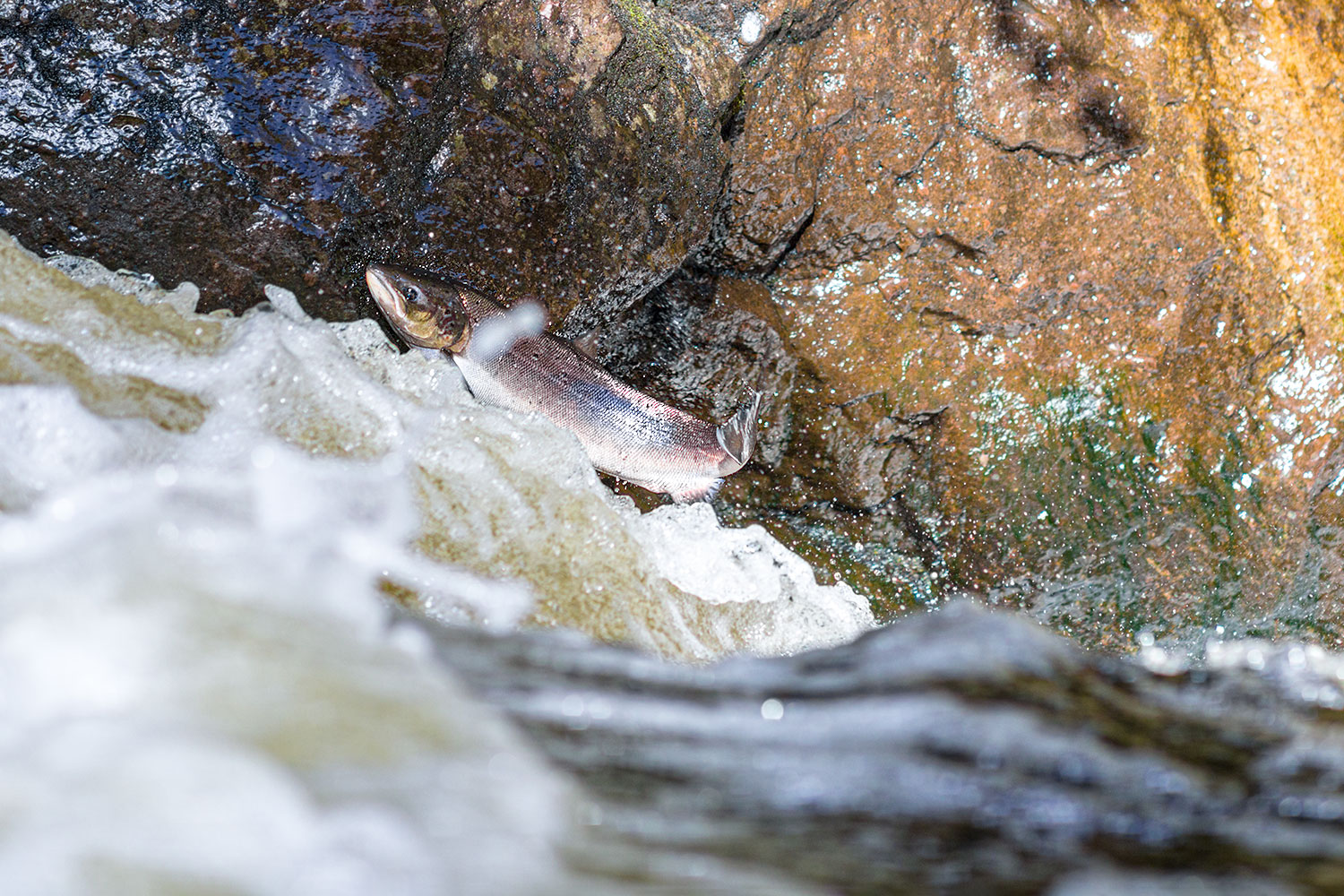 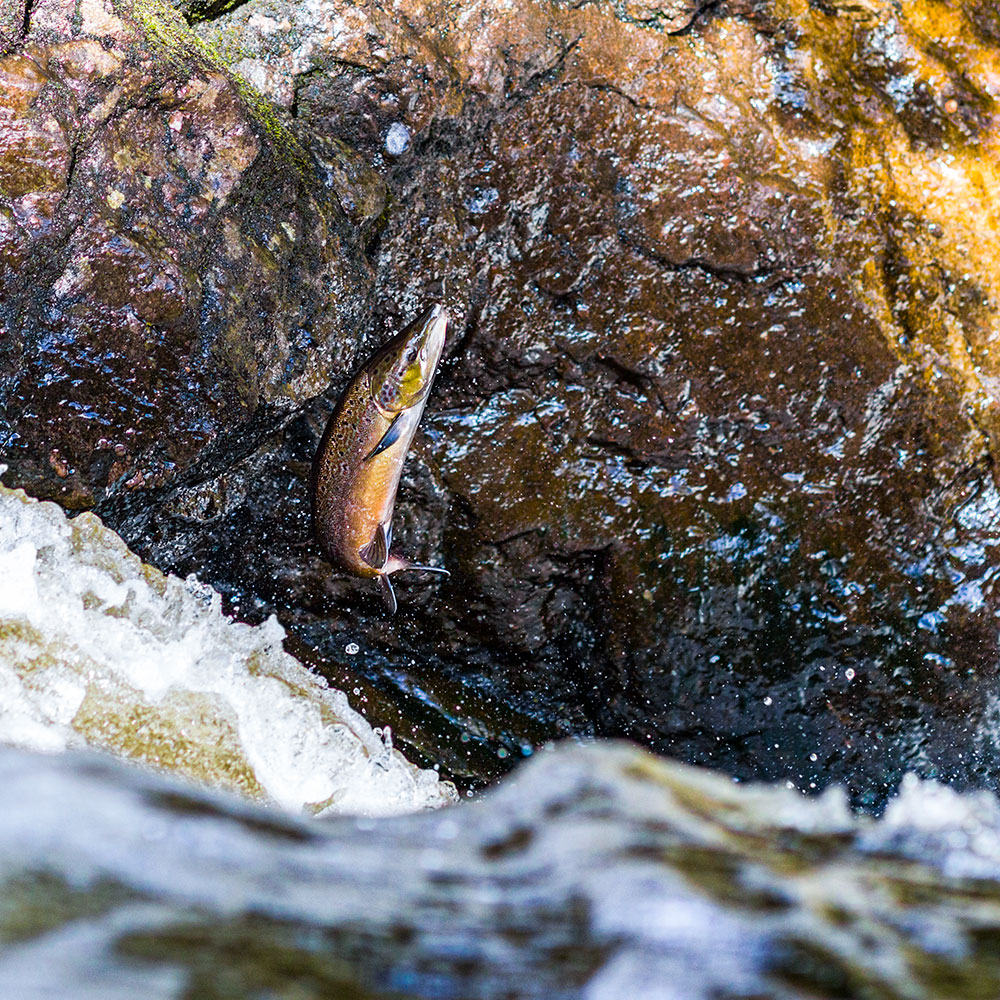 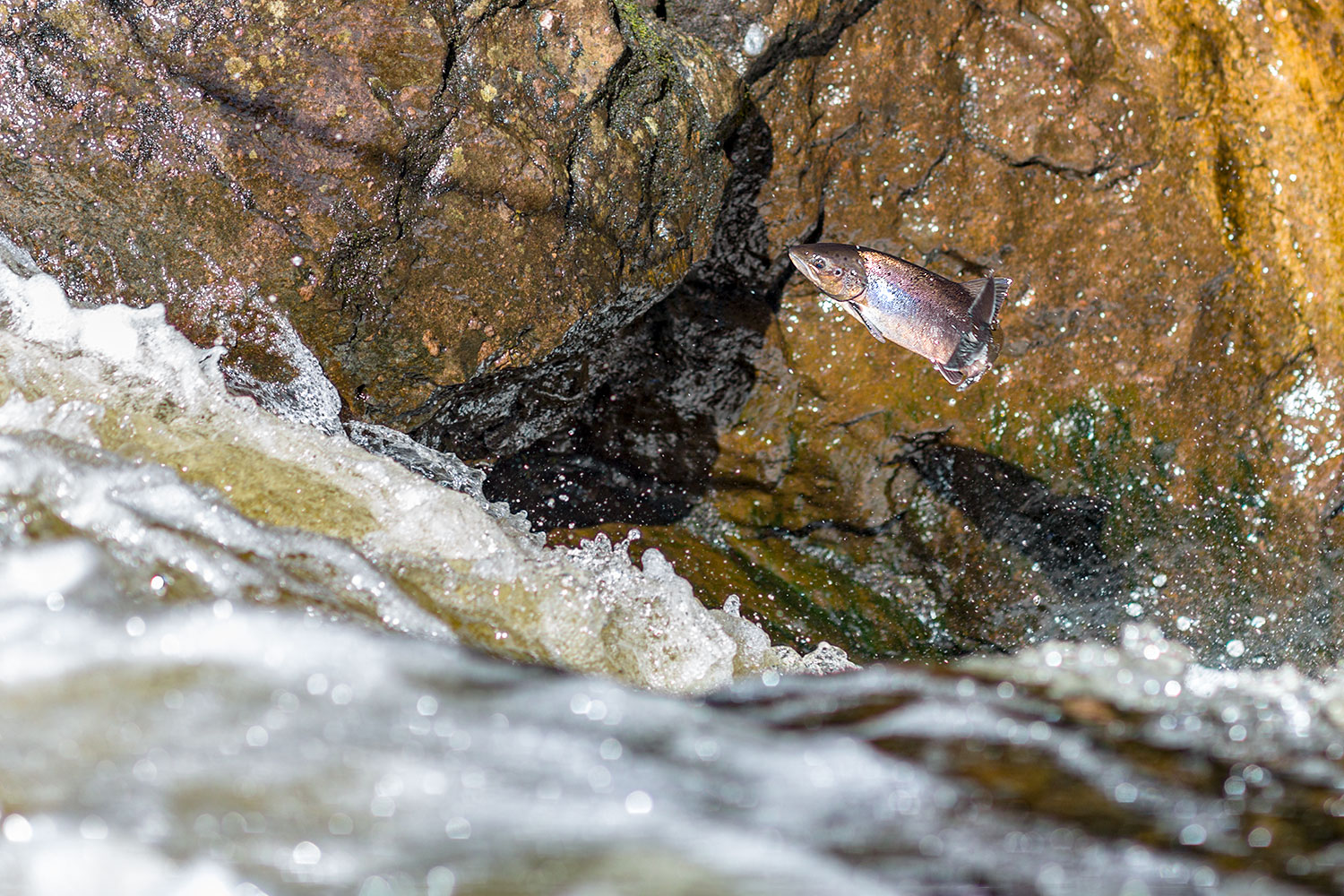 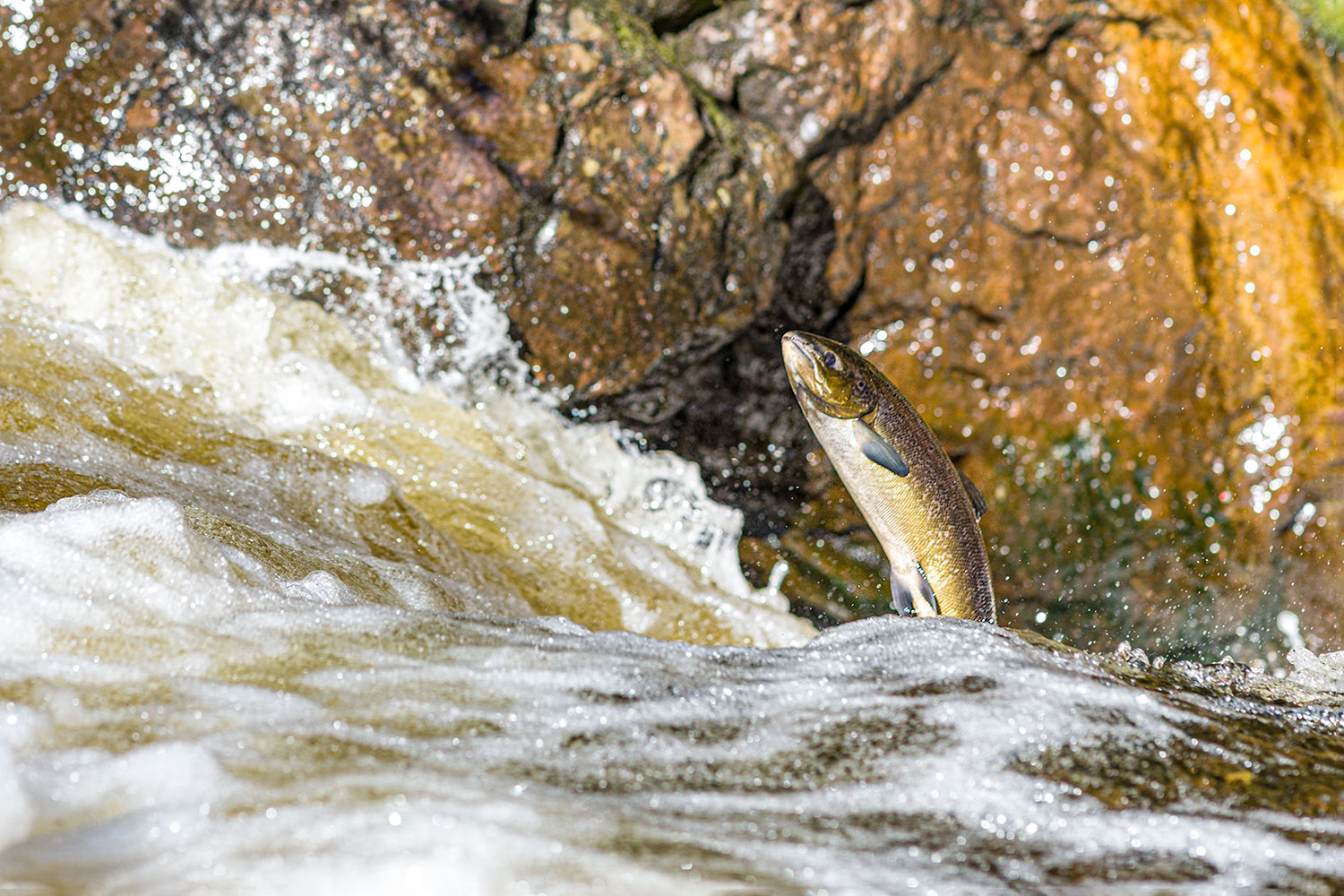 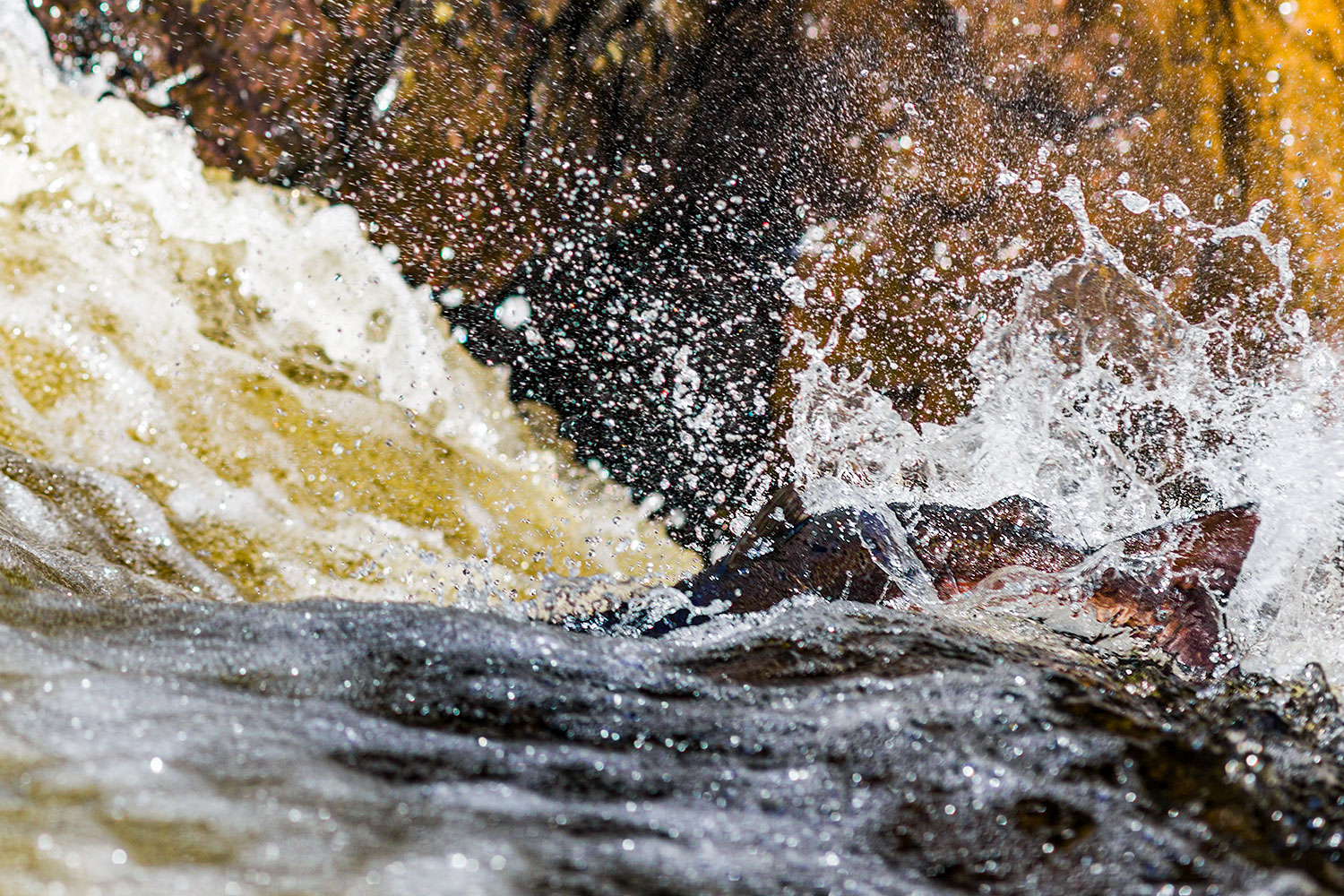 Will continue with the shots from the second spot...

The photos from a few feet further downstream... 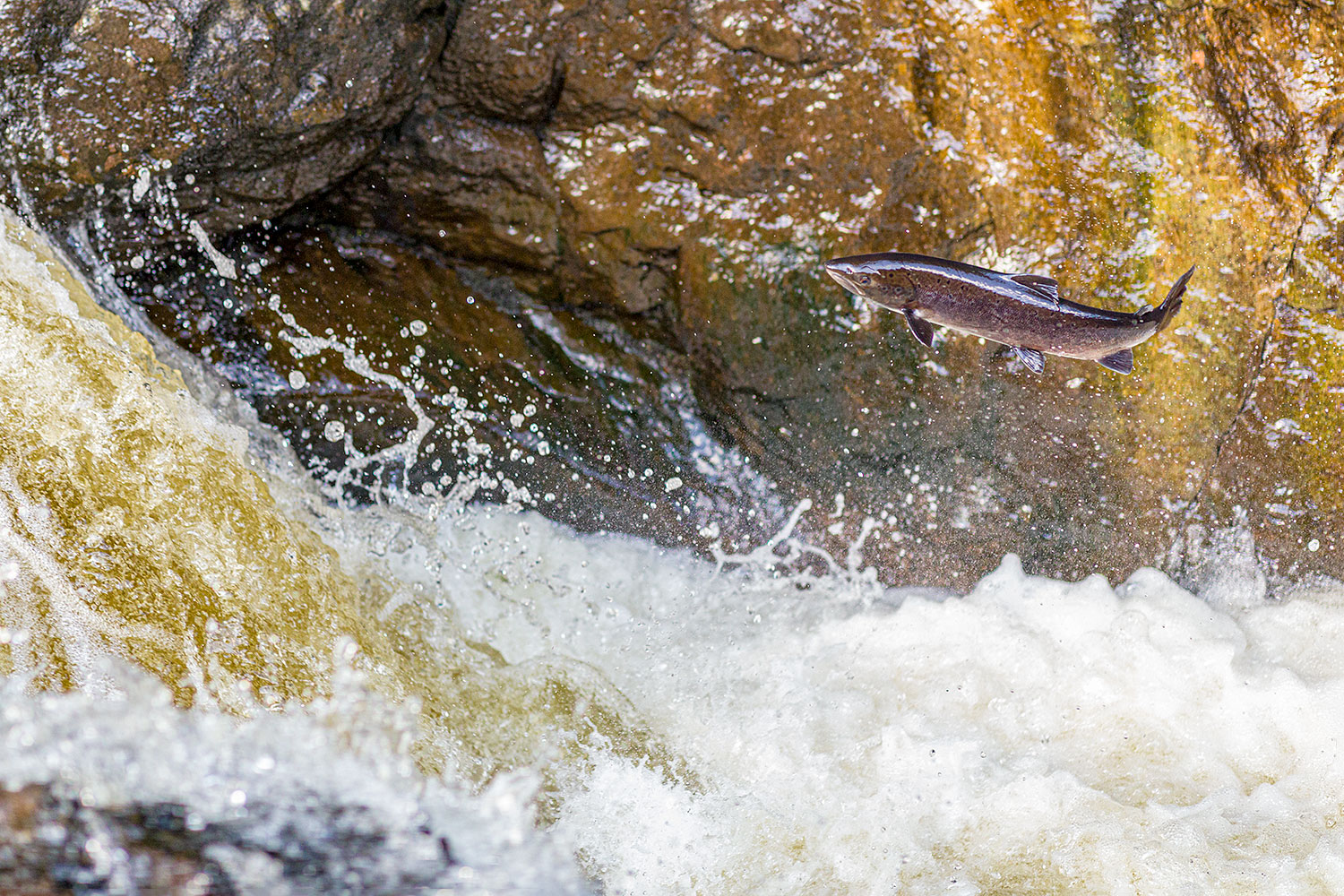 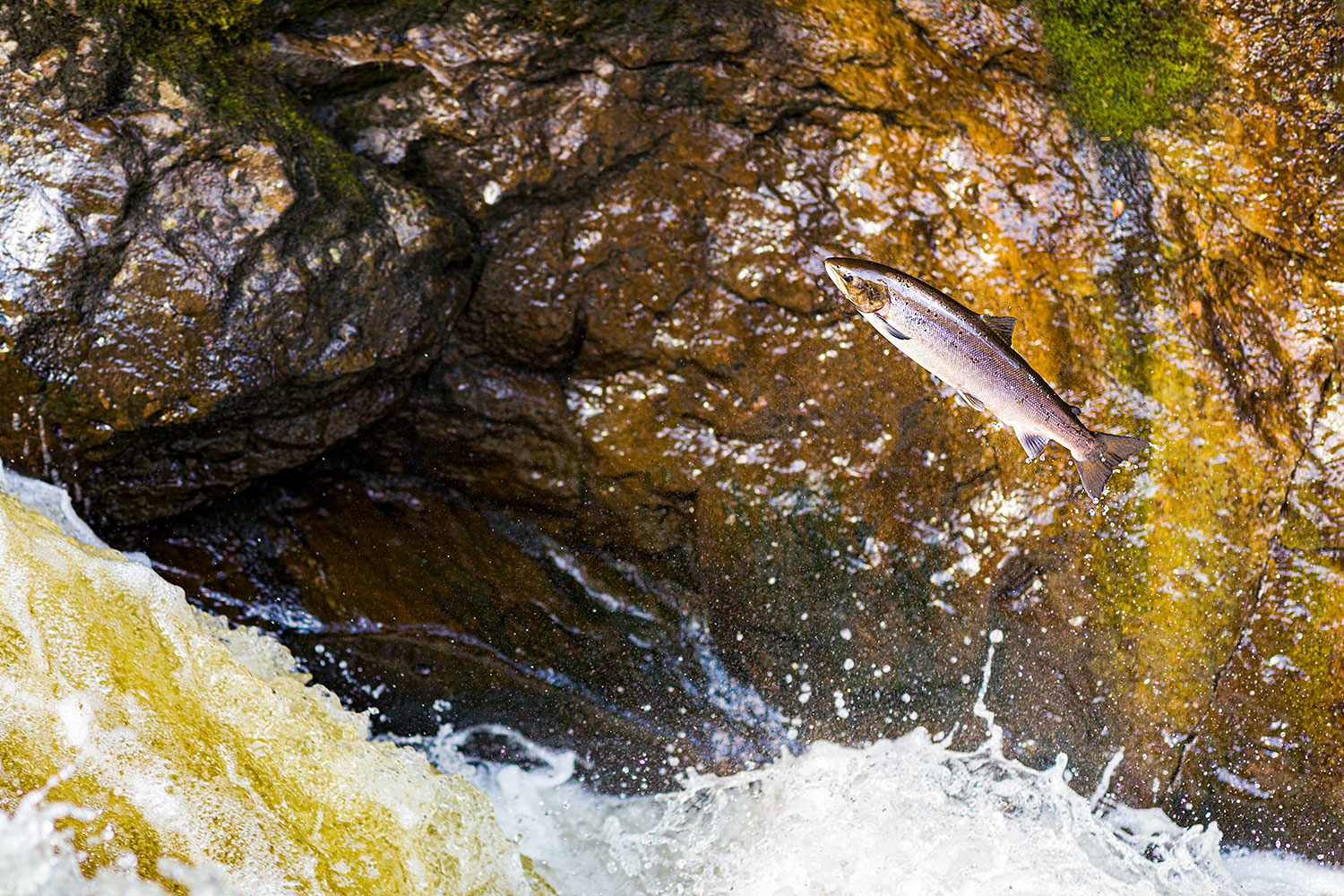 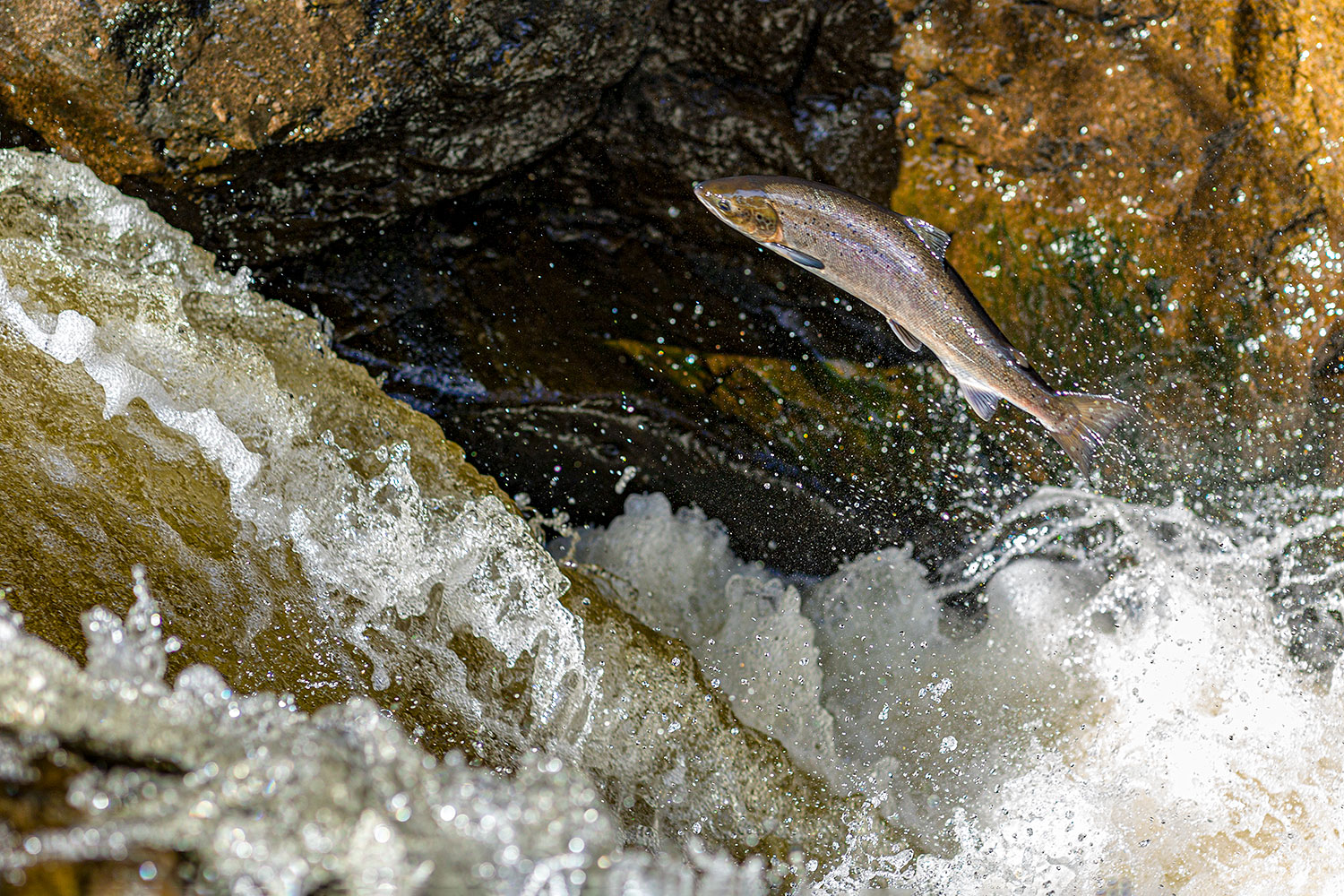 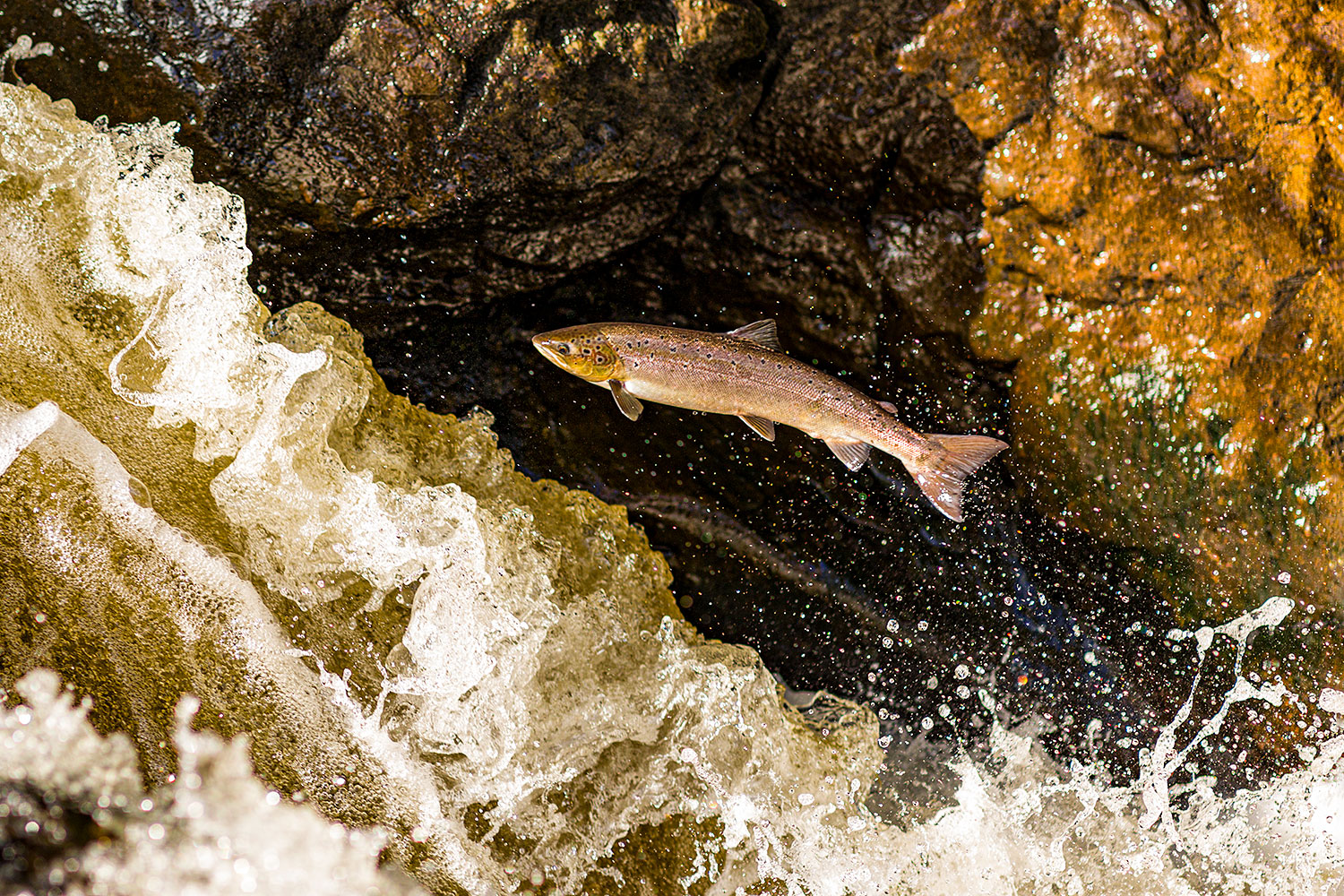 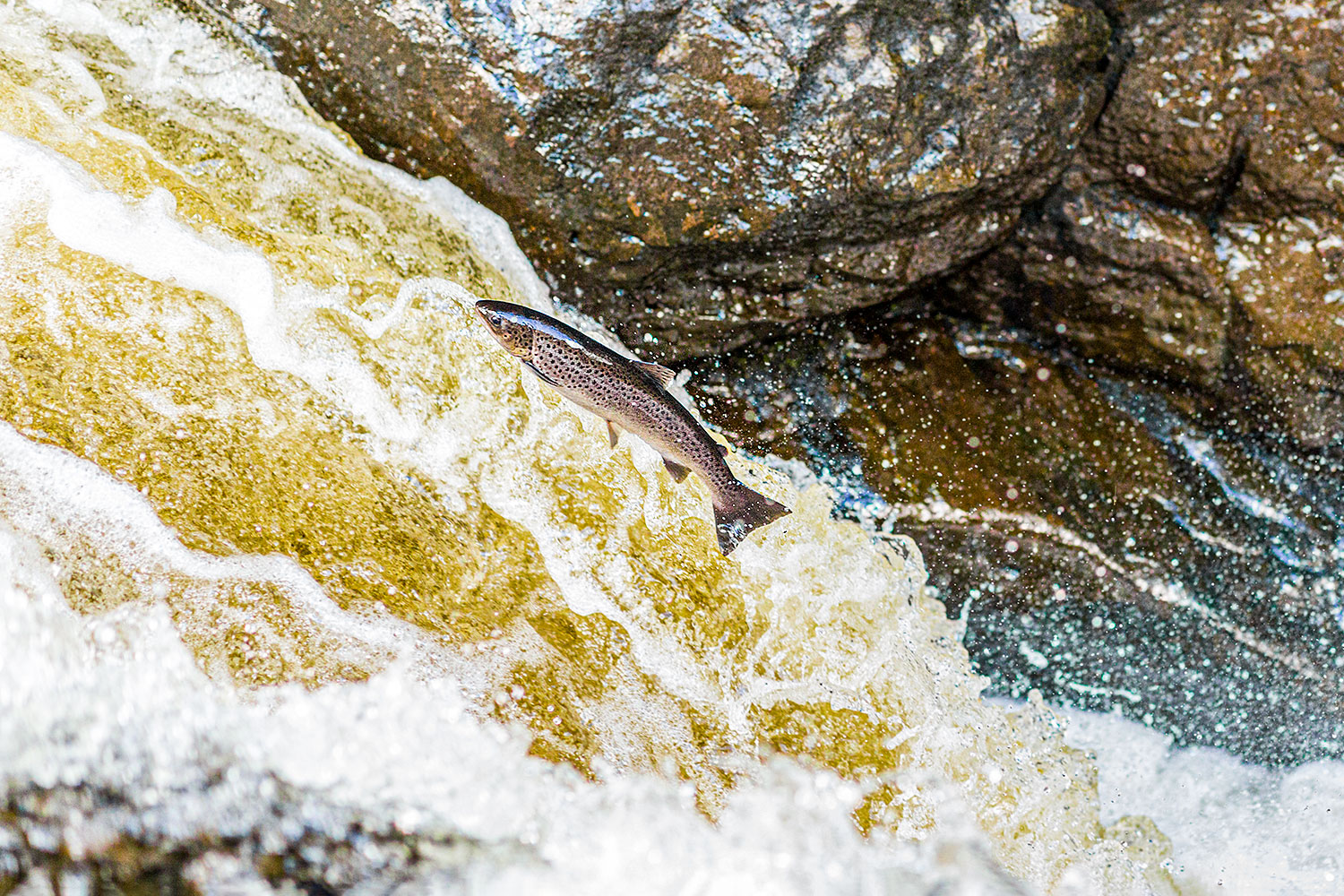 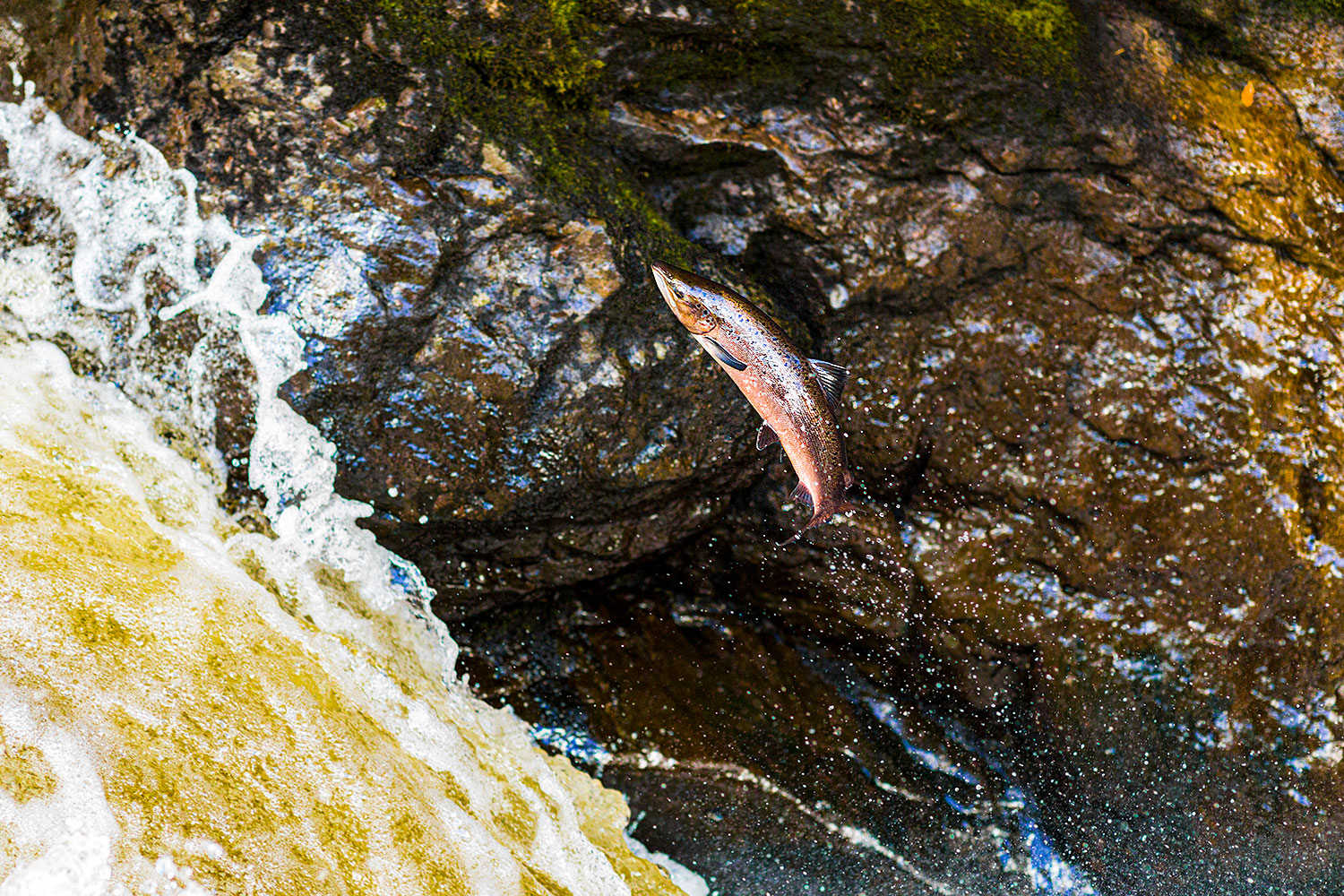 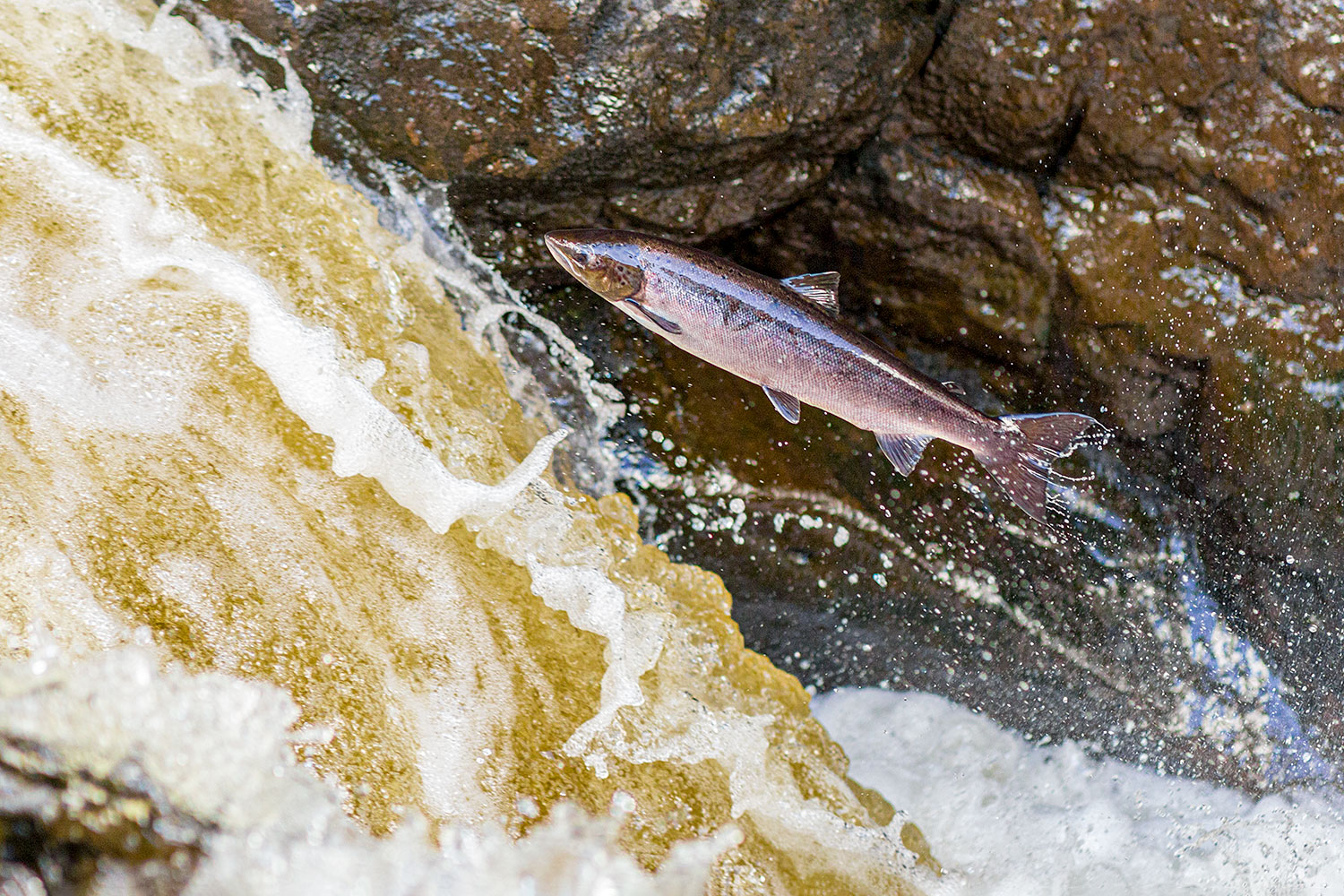 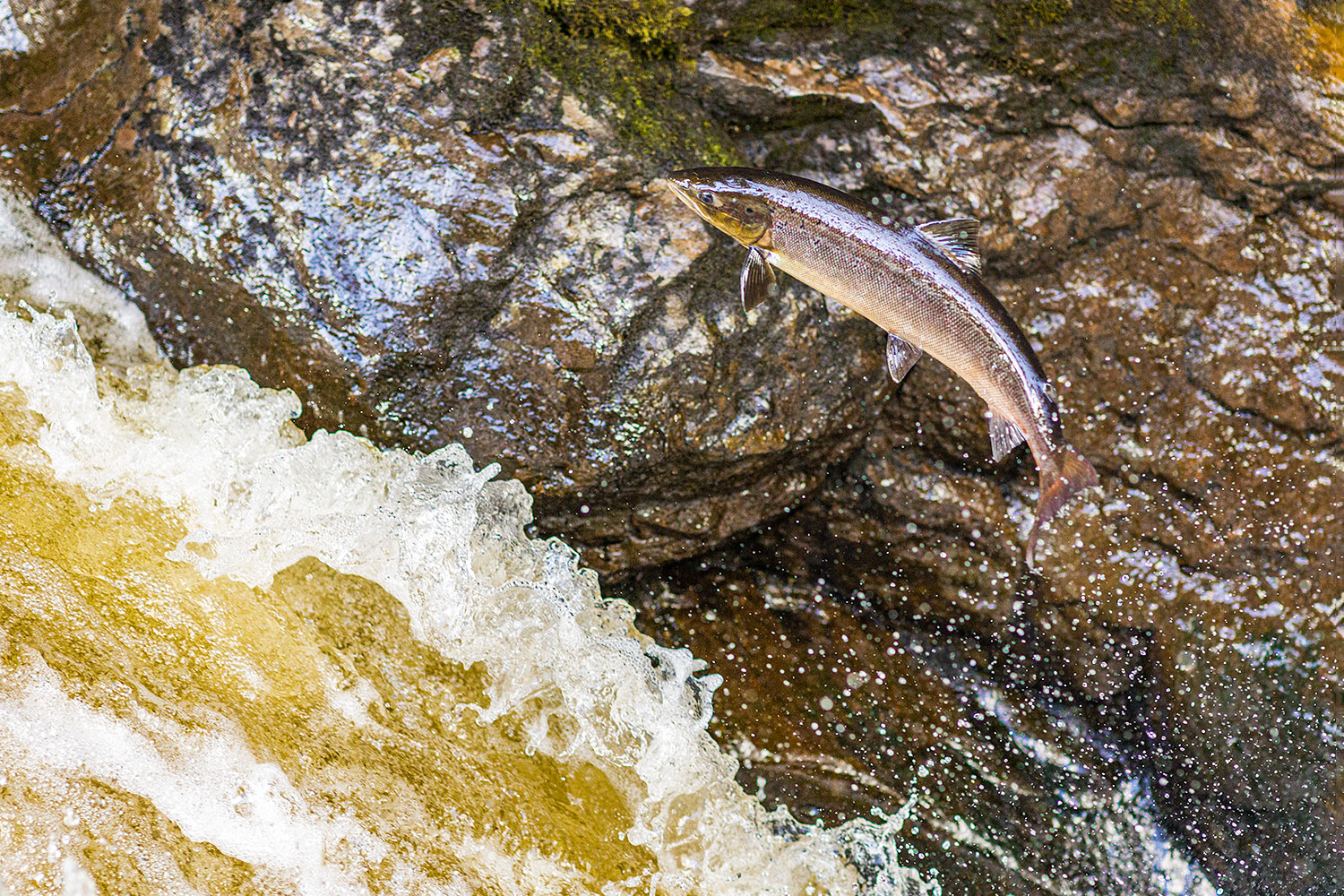 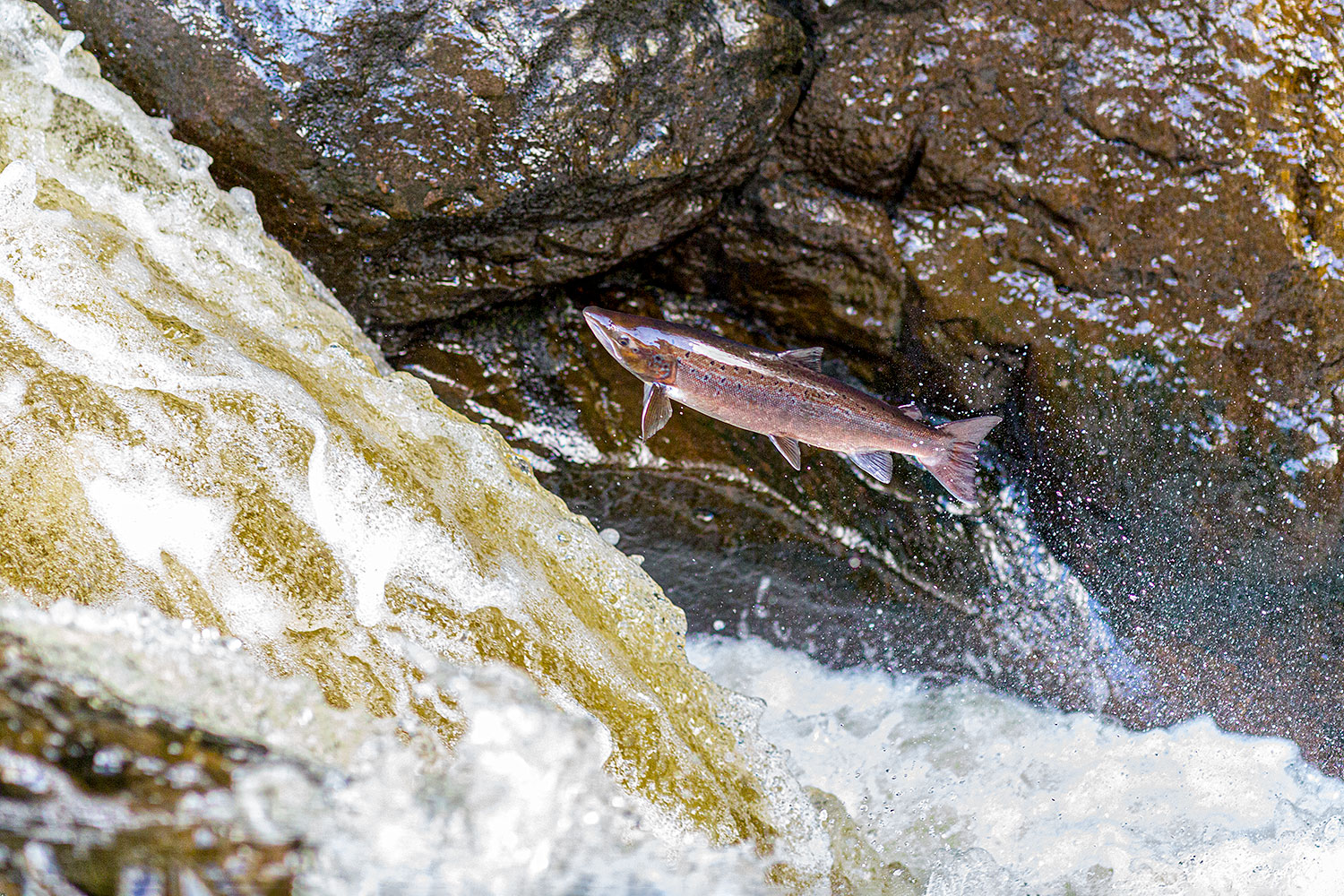 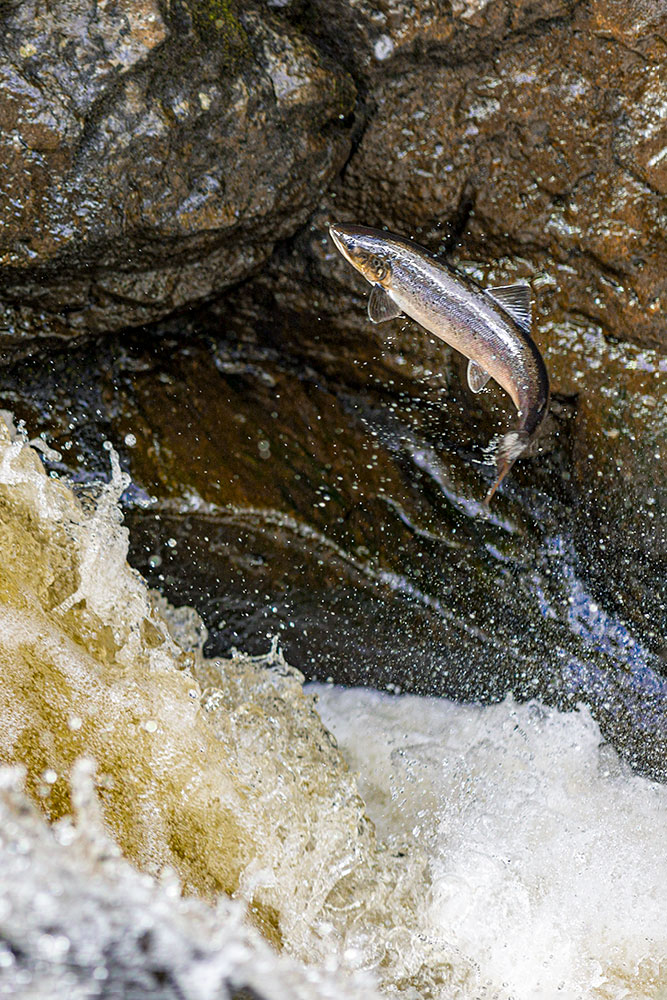 Finally, a sequence featuring a couple of the fish in the above shots...

3319 is the stand out for me due to the oncoming perspective and flared fins.

colliedog said:
3319 is the stand out for me due to the oncoming perspective and flared fins.

Aye, could do. Struggling for material from April, May and June!

Cap'n Fishy said:
Aye, could do. Struggling for material from April, May and June!

Aye right enough. You can only do so many views of Fife from Newhaven.......

colliedog said:
Aye right enough. You can only do so many views of Fife from Newhaven.......
Click to expand...

Location
The Kingdom of Fife

Would one of Newhaven, from the Lomonds be any use

Yeh - I like the composition of 3832 - it was good of the fish to frame itself by sitting perfectly in the centre of the shadowed area of the back wall.