We have had an extremely busy week up at the lake last weekend we hosted both the Welsh and English Ladies teams who also fished our Open Spring Pairs Match on Sunday.
The fishing has continued to be very good especially from the boats as the water warms and the fish start to move out into open water.
On cloudy days good numbers of fish are feeding on the surface to a mixture of hatching buzzer and terrestrial insects.

We have limited availability for boats this weekend. With today’s rod average of 10.9 the weekend looks good.

Today we hosted the 2nd round of our 50th anniversary competition which was fished to a 4 fish bag, limited 10 fish catch and release plus time bonus at 1lb per hour. A slightly lower than anticipated number of entries saw 5 teams of 4 anglers competing for 3 places at the final and their chance of getting amongst the £3000 prize money.

Anglers were greeted with a cold NW wind and bright sunshine but as the day progressed, some excellent bags of fish were caught and the results were going to go down to the wire.

In the team event, Scierra UK took top honours with 55 fish for 110lb 10oz, Clywedog Ospreys taking 2nd with The Blobs taking the all important 3rd qualifying spot at the final which is being held on Saturday 14th July.

The last heat is sold out and will see 5 teams progressing to the final. As well as the automatic qualifiers, 2 wild card qualifying spots will be awarded to the 2 teams with the heaviest 2 fish caught over the 3 rounds. Those spaces are currently held by Meibion Glyndwr 3lb 13oz and Diawl Bach's 3lb 8oz.

We'd like to thank everyone for making the effort to take part today and look forward to Round 3 on Sunday 17th June.

Some great spring weather this week to warm us all up. Although the sun has kept the fish down during the day but a small price to pay after the cold start to the season.
Once again we have seen some outstanding fish being caught during the past week 13lb 10oz and 13lb 4oz the best of the bunch.
The warmer weather has led to more Fly life around the lake with a very good early splash of daddies the most notable!
Methods have ranged from slow intermediate lines with washing lines in the morning then as the sun gets higher the fish go the other way with Di 5 lines doing the best work.
Boat Anglers are enjoying the best of the sport with several clubs visiting during this week Ospreys fished last Sunday with a rod average of 9.5 best fish was Senor Alan Banwell with a cracking rainbow of 13lb 10oz on a floating line and a black bug.
Bank Anglers have found life a bit more difficult but the patent Anglers fishing slow and deeper have still caught well hedge end rainbow corner being the best areas.
We have added an extra Scierra Pairs Heat for the 8th July contact the lodge for details.
As I write we have one boat available for Saturday sold out Sunday boats available Bank holiday Monday

Well we found the wbt. 15 up to 16”, all within inches of the bank. Great day’s fishing, we’ll definitely be back... thanks for the help.


Red Diawl said:
Hi Jon
There are a decent amount of wild brownies in Clywedog and i've caught several so far but pin pointing an area is difficult as they pop up all over the lake amongst the rainbow often.
But my own viewView attachment 14328 is that the bottom end of the lake from dinas point down to bwlch y gle would be the place as this has less angling pressure
but please ask the ranger on duty that day and they will be able to give you any up to date info
Click to expand...

It’s been an extremely busy week with fine weather and warm temperatures the only blip has been a few thunderstorms which has dampened the sport on the odd day.
It has been evident that more fish are being caught in the top couple of feet of water and reports of fish caught on dries everyday but slow sink or tip lines seem to have been the most successful method.
Last Sunday we hosted round 2 of the Clywedog league rumbles of thunder led to slow sport in the morning but by afternoon clearer conditions lead to a vast improvement with Mike Williams of Foxons A taking top rod with 18 fish including one around the 10lb mark which he returned.
56 Anglers caught 443 fish for a rod average of 7.9
Best areas were Bwlch y gle, Eblid basin and Braich y ffedew.
These ares have continued to fish well throughout the week with washing line methods best small boobies or fabs on point with diawl Bach and cormorants proving successful.
Best fish of the week was caught today by Samual Jones from Ludlow with a fine 12lb 1oz rainbow taken on a damsel from the point of Eblid.

We have a vacancy for 1 team of 4 for our 50th Anniversary comp the heat is on the 17th June cash prize fund if £3000 up for grabs get in contact if your interested.

Tightlines from all the team

The coch y bondu beatle have started to make their annual appearance with reports of fish splashing at the surface even in the current bright conditions.
The hatch builds slowly during the month with the northern shores of the lake being favourite, these insects love the sun on there back to get them up of the ground and being poor flyers get blown out onto the water.
Reports of fish taken at Bwlch y gle and Eblid close to the shore on beetle patterns.

This week has once again been a very busy one but the calm bright conditions have pushed some of the fish down under the glare into cooler water with reports of fish being taken on Di 5-7 but and there always is a but fish are still being taken on tip lines fished slowly allowing flies to sink a little deeper.
Bookings are extremely busy on the boats this month so please book in advance always plenty of space on the Bank.

Lodge is open at 7-30am for permits everyday

Tightlines for the week ahead

Another very busy week for the start of the Coch y bondu hatch, the warm weather brought good numbers onto the water especially the bottom end of the lake.
During the past week the sunny calm conditions took its toll on water temps reaching 17.5c at the weekend this seemed to push the majority of the fish down to around 10ft in the cooler water.
Sunday we hosted round 3 of the ORS sponsored Clywedog League
Bright sunshine and flat calm conditions saw most Anglers opt for Di5 Di7 lines but if you managed to be in the right place at the right time the Coch y bondu hatch led the way. Welsh Ladies International Sue Morgan took 10 fish in the afternoon on dry beetle patterns.

Today North wales police fished a qualifier with a rod average of 7.3
top bag went to Colin Jones with 15 fish.
Today’s change in weather to a strong westerly wind has led to a very welcome turn over in water at the lake with water temp dropping to 14c this oxygen rich water will help enormously
especially the banks which have been worst hit by the warm weather.
Bags of fish have been taken from the mouth of Bigga arm Gronwen field and bay.

Tightlines for the week ahead
Team Clywedog

It’s been a very good week up at the lake lots of fish being caught with the cooler water temps bringing on the top end of the lake back into form from both boat and Bank.
Last weekend we hosted the final qualifying round of the 50th anniversary comp. The top 5 teams plus 2 wild card entry’s team qualified for the Final in July which I’m sure will be a very keenly fought contest. On the day 383 fish were caught with 202 returned for a rod average of 7.4.
The sunshine returned today and you guessed it the Coch came out to play with a northerly wind not normally the best but perfect for blowing on the Coch y bondu from the northern shores. Plenty of reports tonite of fish being caught on the dries
We have a very busy week ahead of us with the Ladies home international on Thursday with teams already starting their practice it’s great to see lots of new faces around the lake.
Even our resident Ospreys have been enjoying some surface sport with the fish feeding off the top ( thanks John for the Photo)

We have boats available on Fri 29th and Saturday 30th

Tightlines to all the Ladies with us this week

Had my first visit to Clywedog yesterday and had a fantastic time !
Really helpful staff , stunning scenery and the fish put up hell of a scrap .

Started off around the Elbid and had my first ever double hook up ! What a handful that was on my own in the boat !
Then I moved up to the Braich where the dry fly sport was ace ! They were nailing hoppers and beetles , every cast had you fizzing with anticipation.

The sun and the northerly breeze kicked in late afternoon which made things a bit tougher for me (being a newcomer there) , but managed to find a sheltered spot and have some great fun with small buzzers .

12 hours fishing solid , felling it today .! Thank you to Red Diawl and the staff for what I think is the best fishery in Wales .

Having a play with uploading picture for the first time. This was at Clywedog a month ago. Since then she's come up a bit

glas y dorlan said:
Having a play with uploading picture for the first time. This was at Clywedog a month ago. Since then she's come up a bitView attachment 16666
Click to expand...

Photo turned for you Kev.. 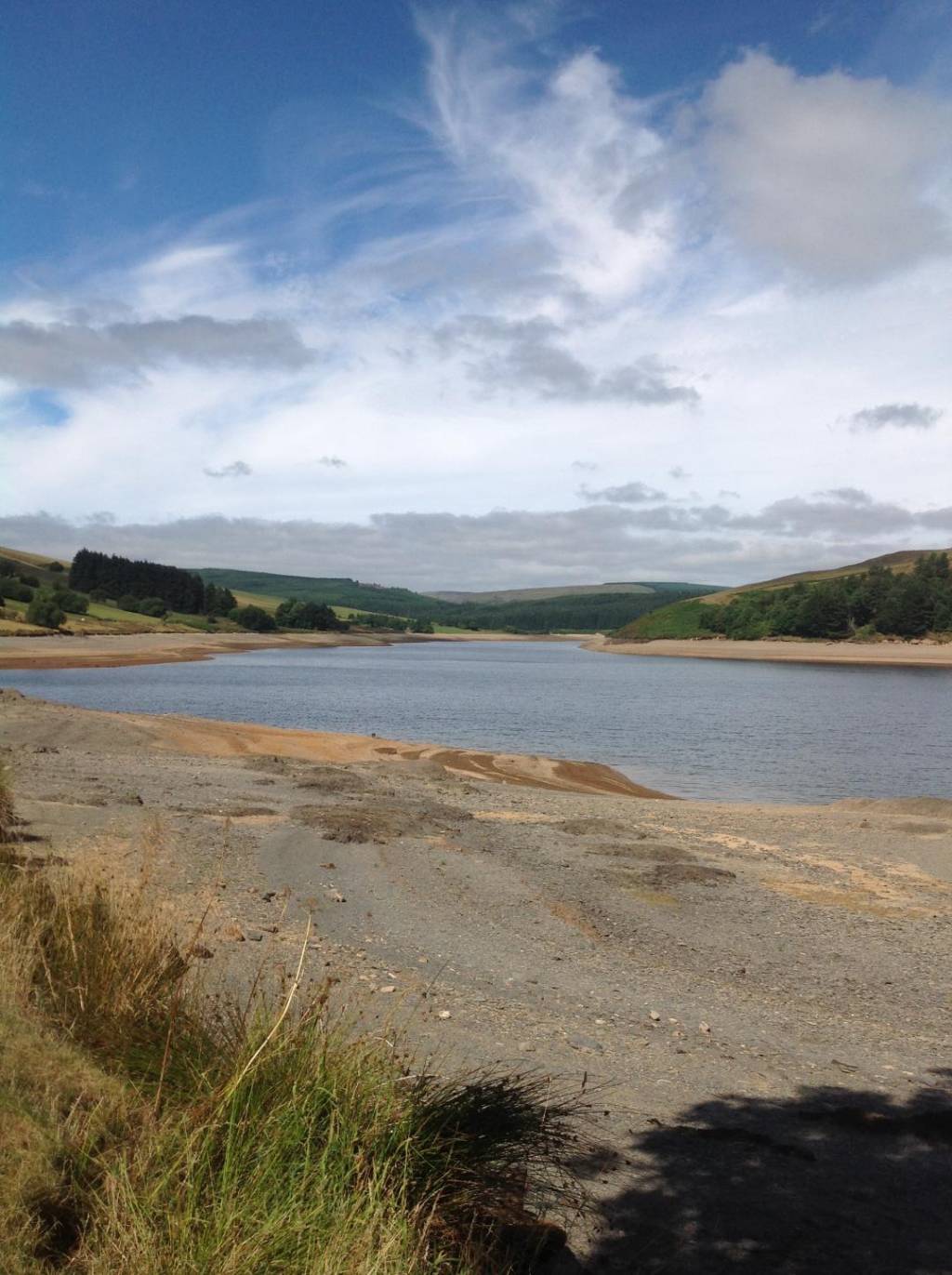 Sent from my SM-G950F using Tapatalk

Cheers Rich. Will do more homework on this picture uploading lark :thumbs:
B