silversedge said:
Its hard holding onto them and trying to focus at the same time
Click to expand...

Helps being a leftie

Or getting a half decent boat partner,who can catch a troot or two
I wont name names,but you know who you aremg:mg:

Thanks Stuart,heres a couple of my nephews fish last night,

A couple from today at Arnfield for myself and Matty. A good day afloat with plenty of fish between us. Only sore point - my head after having to have one of Matty's size 10 Kate Mclarens removed, with barb and all. Ouch. stuartpengs said:
A couple from today at Arnfield
Click to expand...

Nice work as always Stu. What you using these days for these shots - shutter priority or what? What shutter speed?

Cap'n Fishy said:
Nice work as always Stu. What you using these days for these shots - shutter priority or what? What shutter speed?

Thanks Col. If possible I try and use the manual setting as I'm convinced I can squeeze the aperture closed a couple more stops than the camera selects in Shutter Priority (clawing back a bit of under exposure in LR), don't know if you find this to be the case also? But that only really works for me if the light is constant (either constant cloudy or constant sunny, a quick glance at the metering bar on the top display tells me if I'm pushing things a bit) but if like today it's broken cloud, sunny spells etc I just stick it in Shutter Priority and rely on the camera's choice of aperture.

Speeds vary from 500th/sec for when it's darkest (I know that can mean sometimes a fully open aperture, but I'd rather have the speed to freeze the shot even if it means I run the risk of being out of focus because of the narrow DOF, that way at least there's a 'chance' of a keeper') up to 800th/sec was the fastest I think I went to today, I never really feel the need to go faster than 800th/sec personally. After a full season at it now I'm getting the hang of reading and adjusting on the go by using the metering bar and histogram. Only taken a year to get my head round.
Last edited: Jun 11, 2011

Cheers Stu. Interesting stuff. I know exactly what you are getting at about neither shutter nor aperture priority giving you exactly what you want -- I have not resorted to manual myself yet. Interested to see your shutter speeds, as I am pushing mine higher and higher. Did some today in appalling weather. Will post.

Got an invite to fish Portmore from Ron, Mr Fliesonline. Been getting great dry fly action thanks to falls of black gnats. Unfortunately, it was 7C and pissing down all day. . No meat on the water, but, having tackled up with dries, and being reluctant to get everything wet changing over, we just stuck with it. We had decent sport, with my fish coming to a 14 Adams hopper, and Ron's to a parachute Adams.

In the rain, it was all I could do to squeeze off some action shots of Ron's fish coming in... 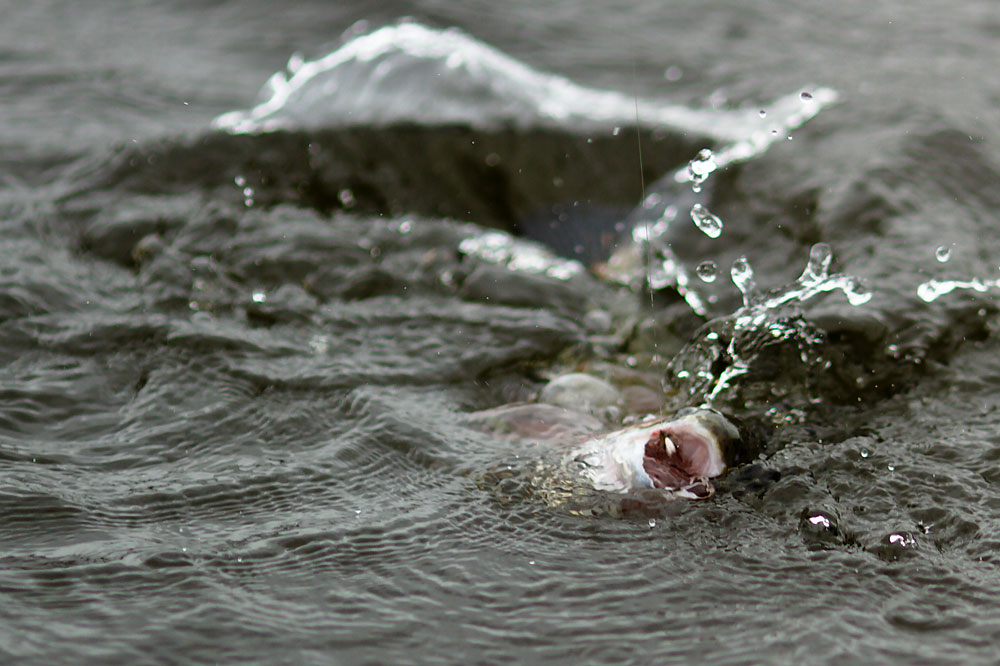 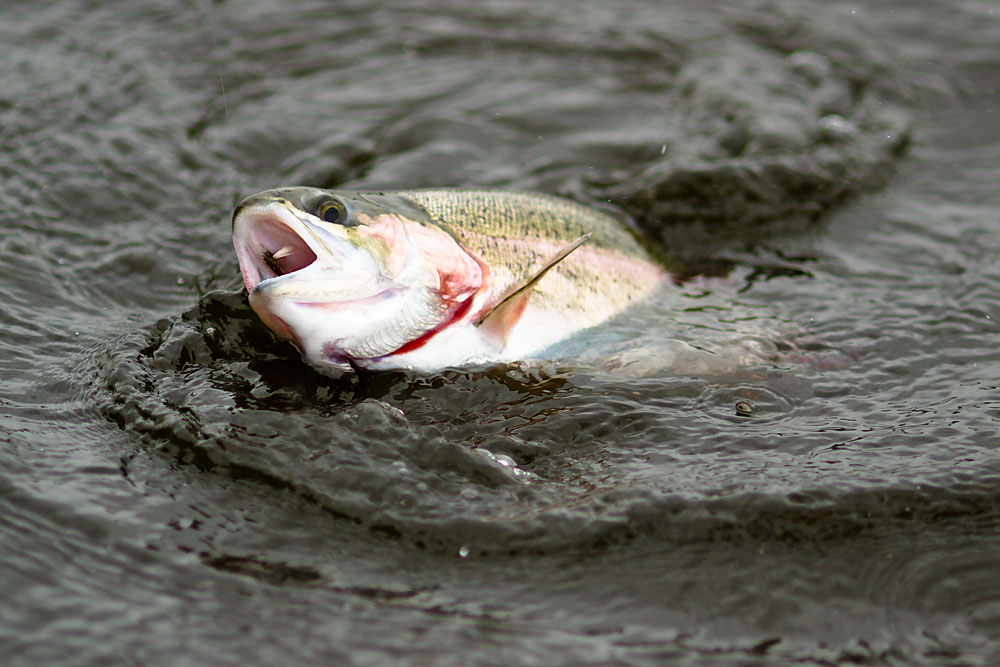 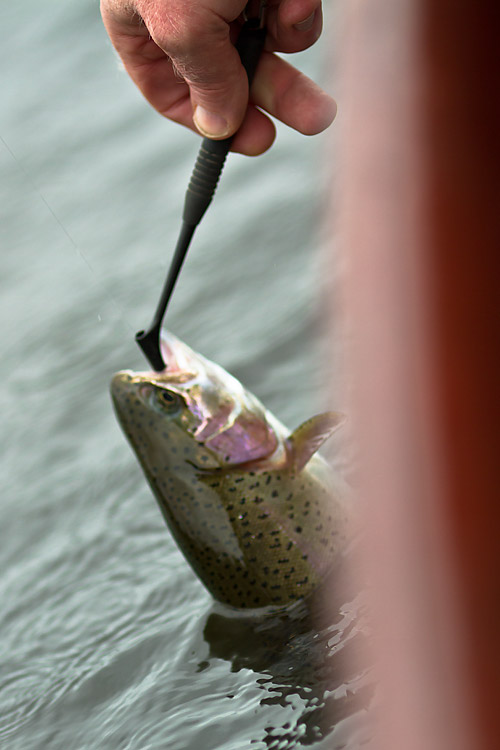 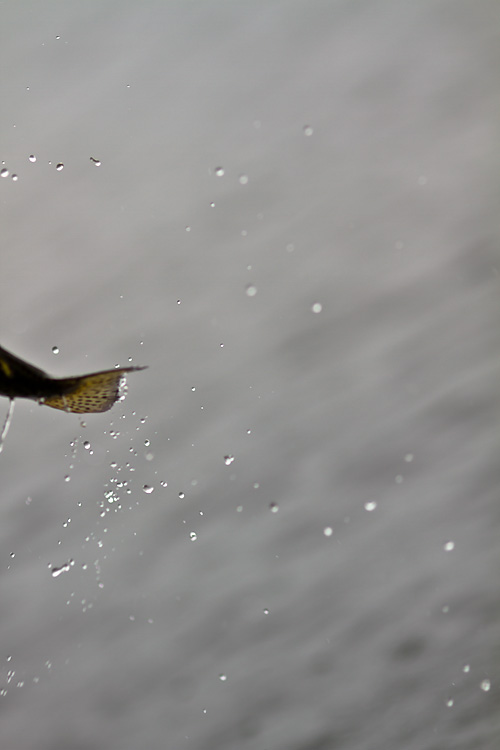 another near miss... the chance was on me too quick and before the camera had a chance to adjust the focus and get a lock on anything. 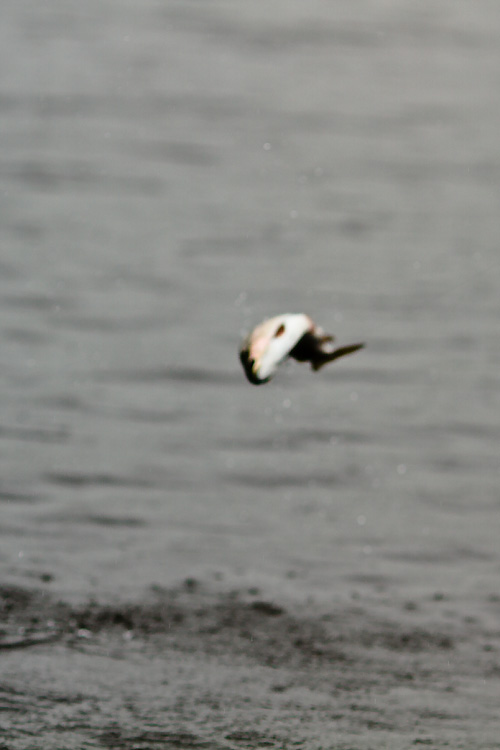 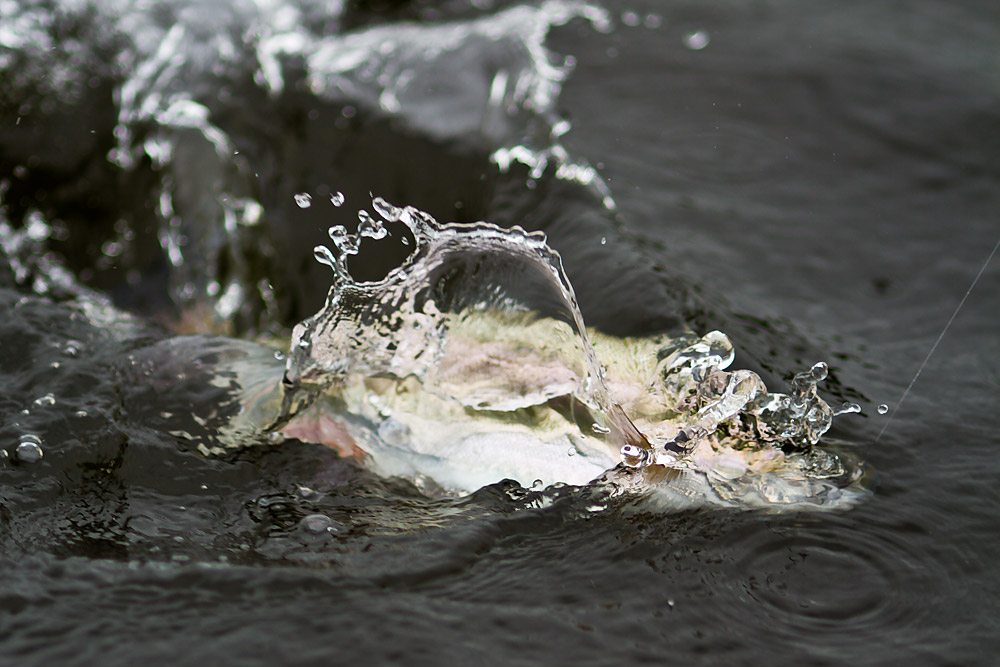 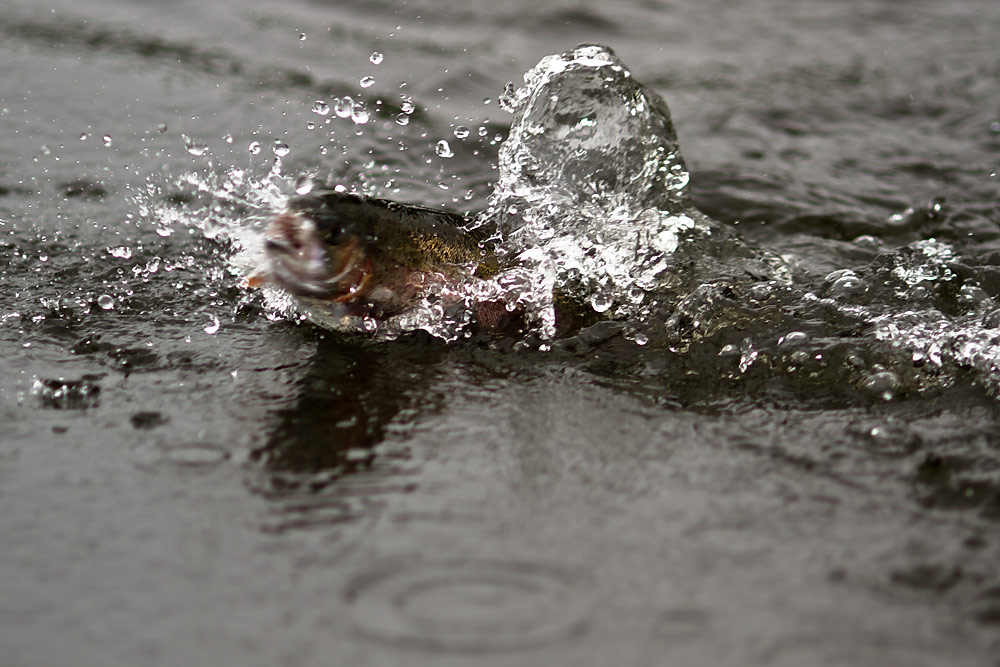 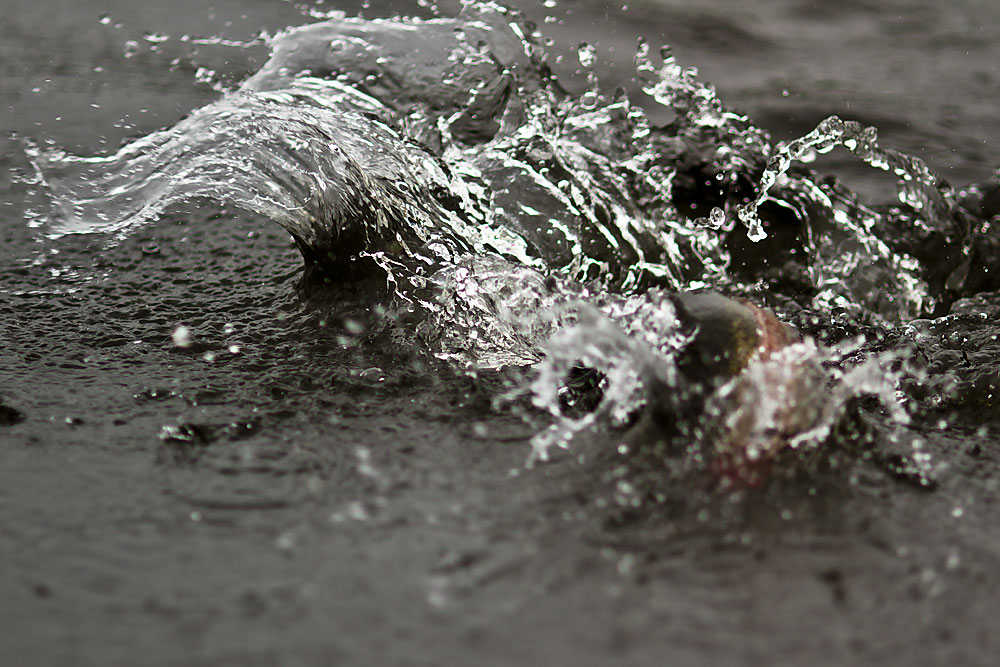 Nice shots Col. Jeez with that kind of shutter speed no wonder you've not got much DOF to play with

That 'near miss' shot looks like it would have been a winner winner sausage dinner too. I've got a few of those from today, I'll put them up tomorrow. Determined to get one of those 'Holy Grail' shots this season - fish in mid air, all in focus. Damn it's hard though.

A couple of near misses as promised Col. I'm determind to get one mid air this year, or die trying.

Location
On a river

MOV039_Edit.mp4 video by rookstorm1 - Photobucket
not big but well done,pity about the quality of film but we are working on it

stuartpengs said:
A couple of near misses as promised Col. I'm determind to get one mid air this year, or die trying.
Click to expand...

Aye Stu, it is not easy. You need the fast shutter speed to freeze it... so that dictates a wide aperture... which makes focusing on the fish (when it suddenly appears) very tricky

The first frame is me just pressing the shutter as soon as the fish jumped, so before the camera had a chance to react and do anything with the focus... 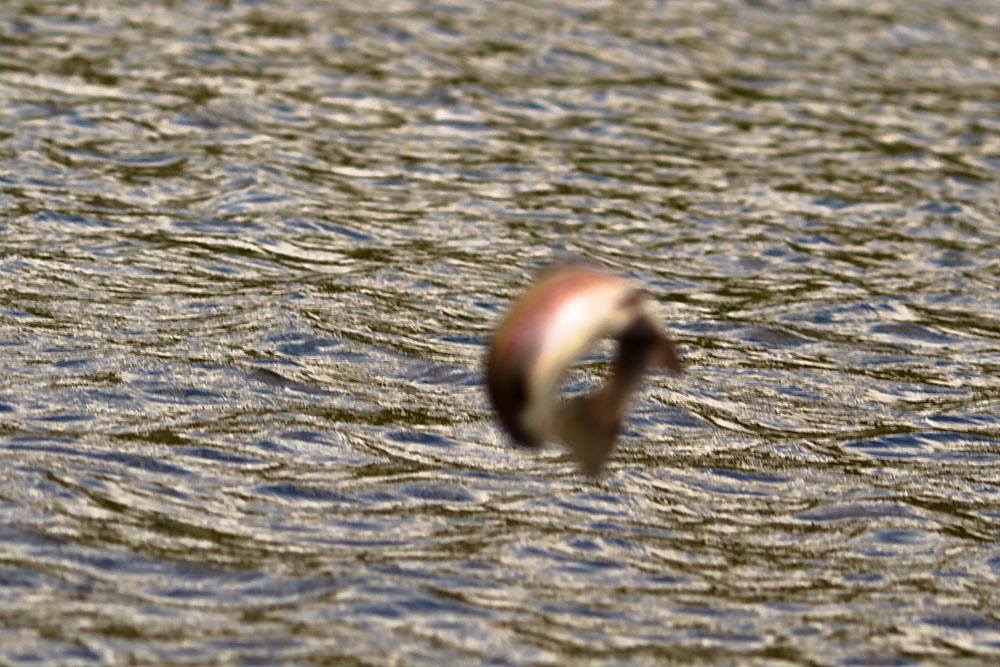 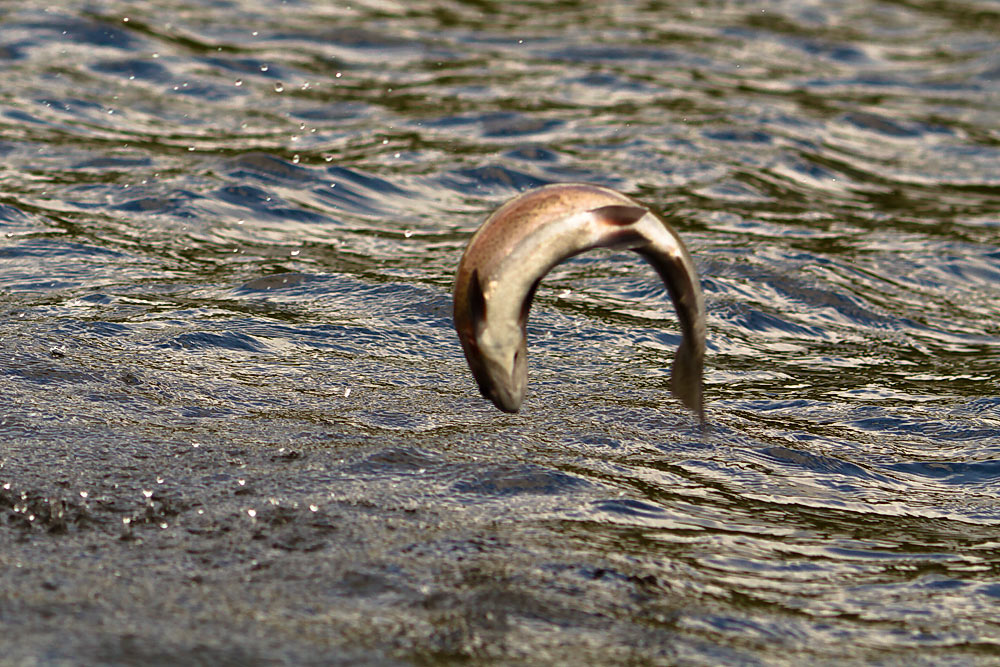 And still, with all that technology, it didn't quite nail it!

With hindsight, I could have taken it out of auto ISO and gone for ISO 800 to force a narrower aperture and more DoF, but as we keep saying...

We should be starting a near miss thread,ive got hunnersmg:

Damn fine effort Col! First one to put one up fully airbourne, in focus and correctly exposed wins a whole heap of Kudos.:thumbs: If it also happens to be a wild brownie too?

Nope, not all of the fish in View.

stuartpengs said:
Nope, not all of the fish in View.
Click to expand...

Not sure that is a wild brownie, either