Like Steve, I don't have a barb in the box, I do lose fish sometimes but maybe would have lost them anyway.

I've not used a barbed hook since early eighties (apart from sea fishing but that was borrowed/hired tackle and gear), that includes coarse fishing, spinning etc and dead baiting for pike.

Out receiving more fishing education today (Fishon guided day) plus playing with a new rod (well a demo for the day supplied by Fishon and it was that good I bought one :goodcast: )
9.6ft 3/4 Marriott Tactical Pro with a Fishon French leader. Leader fish long and short (Czech style), double nymph all day. I only used 3 different patterns and all caught fish, both browns and grayling (I'll have to post in the grayling thread as well ).

A master in action.

A student in action (mobile phones and pics! hno.

confirmation of a brown.

Out yesterday afternoon in a showery and blustery August. A slow start, but turned OK in the end with about a dozen trout and a few grayling. Only hooked one on a dry and lost it. As for barbed hooks - never use them. If I lose one it's nearly always my fault and then I just try to catch another

O.K. chaps, barbless it is from now on - supposing I remember to debarb flies as I use them. I'll report back.

Simply set aside a half hour, go through your fly boxes and debarb them as you identify them.

I've fished barbless for years , it isn't solely the beneficial aspect of catch and release which makes it worthwhile, you'll never have the hassle of struggling to remove a barbed hook from your net, clothing or person, you avoid a lot of tedium by choosing that route.

Out on the River Lagan yesterday i got my PB wildie, 1.6lb and can't wipe the smile off this face. Released to catch again tomorrow

focyall said:
Out on the River Lagan yesterday i got my PB wildie, 1.6lb and can't wipe the smile off this face. Released to catch again tomorrow
Click to expand...

Stunning fish, will stay with you for a while i am sure

danielp said:
Stunning fish, will stay with you for a while i am sure
Click to expand...

For sure, won't forget that one!

Out again today, usual river and fished the lower stretch with 2 mates. River at a nice height, temp was cold compared to the Don on Sunday. The breeze a bit of a problem which got worse later. hno: (excuses, excuses mg
Used my 8.9fy #3 with same reel and setup as I did on Sunday (funny how the reel feels nice on this rod and also on the 9.6ft 3/4 I used Sunday), French leader and 2 nymphs, same as I started with on Sunday though this time I didn't make any changes. Started in a slow section and soon caught my first brown, about 7 inch. 10 mins late I had my second, 5 mins later again had my first grayling at 8 inch. Anyway, less on the grayling and more on the browns (it's what the thread is about ). After 2 hours 45 mins I had managed 11 browns, best gong 12 inch ( I also had the smallest minnow I've ever caught :embarassed. My 2 mates had also been catching, one also had 11 browns with his best going 14 inch. The other had managed 7 browns with his 7th taking a dry.
The afternoon just got better despite increase in the wind which made casting and steady presentation with the FL hard work at times. I ended with another 9 browns with best going 13 inch but also a chunky fish. Fish caught in fast water in all depths in the afternoon. I did see a few risers but wasn't tempted even with a few small olives coming off. My mate who had 11 managed same as me again though nothing above 10 inch, he fished duo. the second mate ended with 13 browns, 4 to a dry and again some decent fish with his best going about 13.5 inch. We all managed grayling aswell but only me with a minnow.
Twoz a good day had by all including a youngster who was using a bubble float and bread and caught a brown.

Now to the other thread. :doh:

First time out today for a bit. Been busy lately with moving house, so I thought I deserved a de stressing session by the river.

It was challenging from the start, everything was a bit dead. No rises, or fly life. I suppose it is getting on for late August. There was also a howling downstream wind, which the weather forecast failed to predict!

Anyway, ended up with three fish. I was pleased with that result. Two good sized (fatties) and one wee one.
Plenty water in the river, so no complaints there. 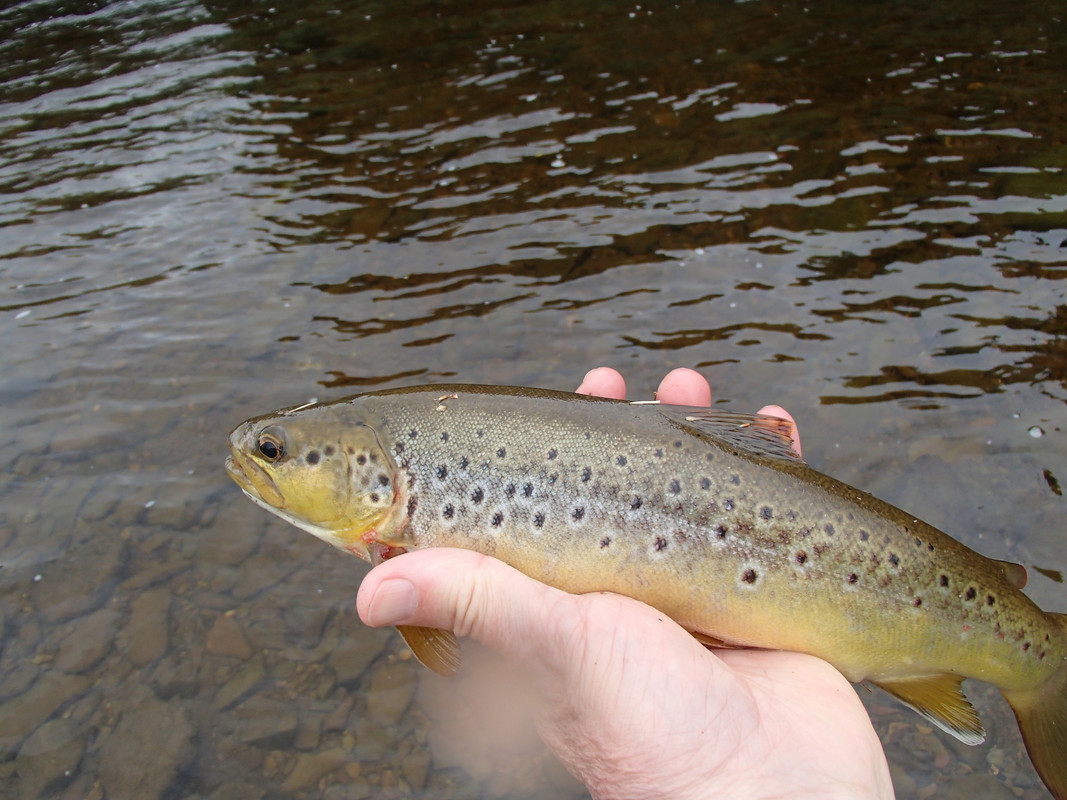 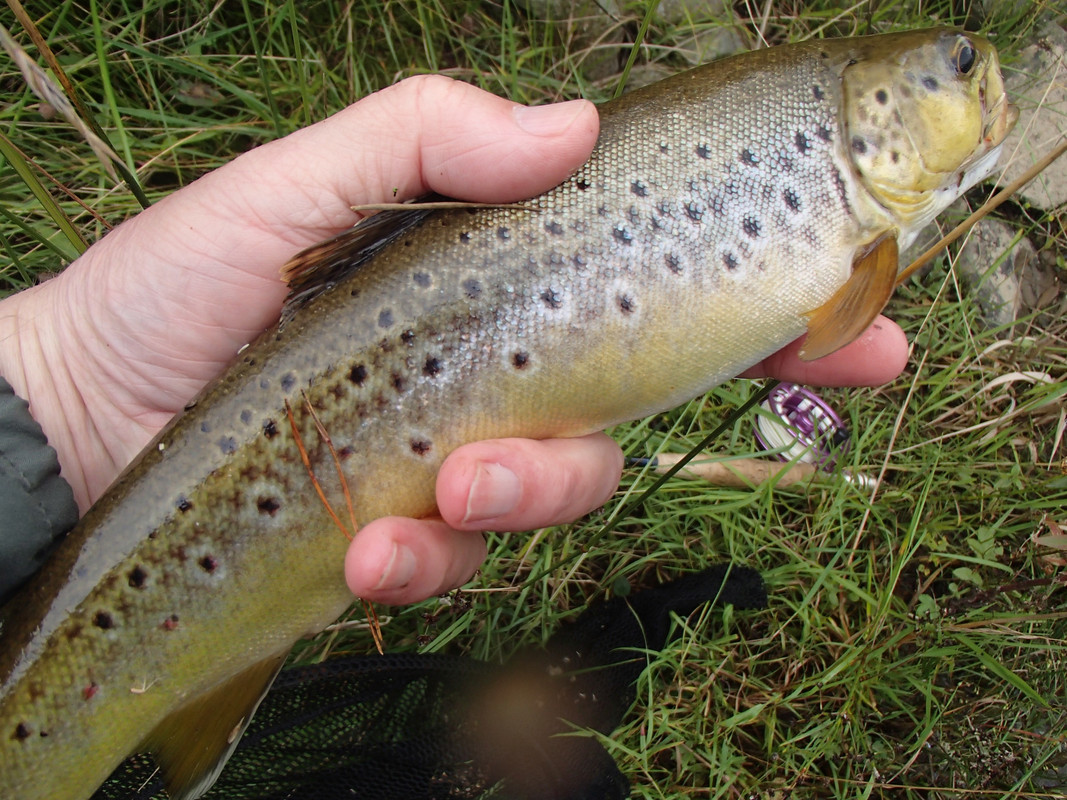 Best of the day. 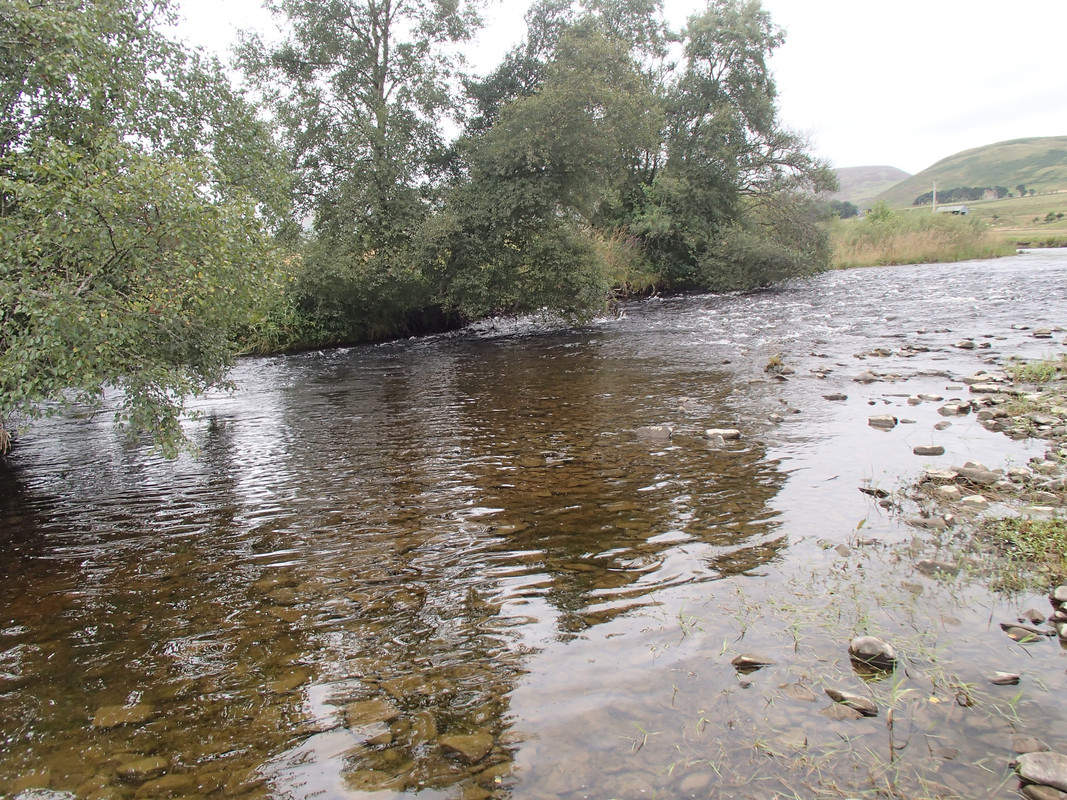 River was a perfect height, but they were keeping their heads down today 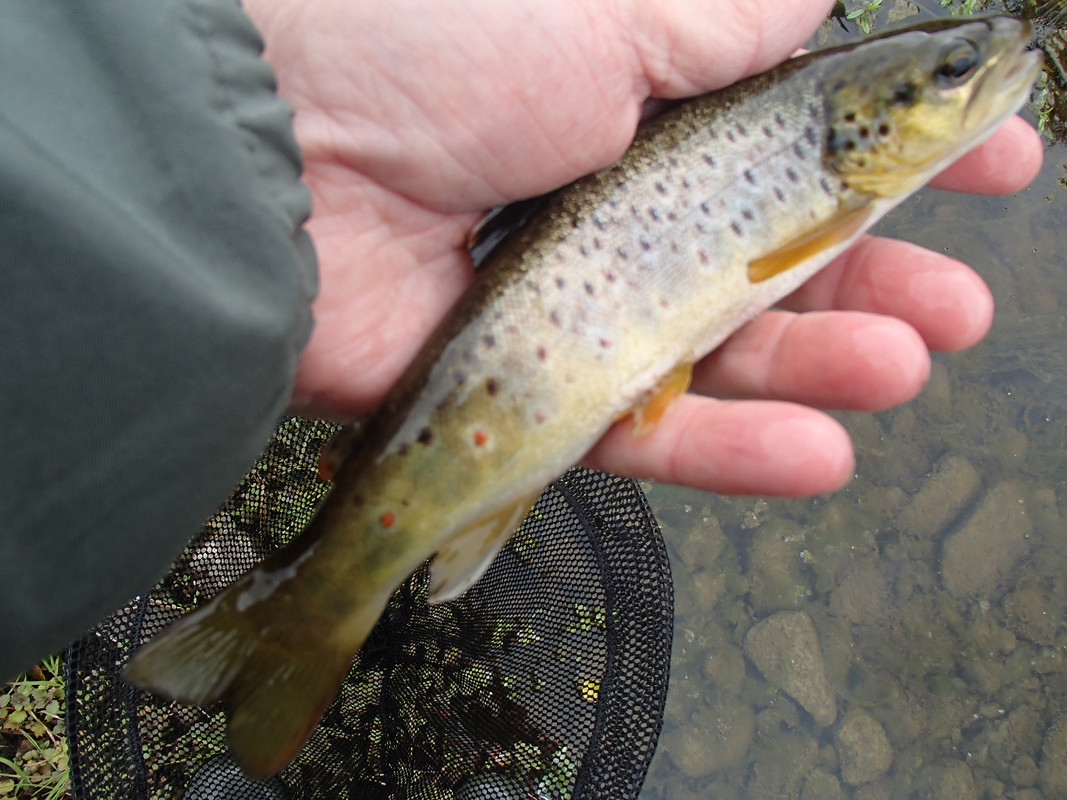 Douglas, that river looks as clear as the one I was on tonight

On my trout only stretch this evening, the river was gin clear though still about 10cm higher that I’d like and quite fast on some of the better bits, it still looks like someone has scrubbed the river bed with a brush and bleach, had 5 tiny browns not much bigger than my middle finger and another about 8oz to a 18s ptn and an 16s red tag, also got rid of a couple of escapee rb’s to.

Had a day on the river yesterday and gave my cut down DT line a work out. So you can cut just over 3' off and it still fishes well.The river was up from where it should be at this time of year but running clear. There was no sign of fish rising so I started with the nymph a hot spot PTN. The only interest at first was from small Grayling.

Like a fool I had listened to Carol kirkwood and believed her when she said it was going a nice dry day. So decided to leave my coat in the car :thumbsdown: I had been fishing for about 2 hours When the wind got up and there was the mother of all squalls. Luckily I found shelter under a bend willow and some balsam

After the squall the river came to life as always happens, with olives hatching off and fish rising. This lasted for about 1/2 hour and I took 3 small Trout on dry fly. Then it stopped as if someone had flicked a switch. I went back onto the nymph and finished the day with around 15 Trout

This time last season the Wharfe was showing it’s bones and needed water. This morning it was one metre on the gauge, about three times the perfect level, but clearing nicely after yet another spate. There was no chance in the main flow so I tried a team of spiders, flicked upstream in the edge of the current...nothing doing. I guessed that things might improve in a couple of hours so I wandered downstream to a fast rapid and tried pulling a streamer through the adjacent slack. It’s not a usual tactic for me, but it kept me amused for a bit and there was a diversion when a couple of kayakers came through. To be fair, they waited upstream until I saw them and waved them down and they shot through the white water, another wave of thanks and off downstream, no harm done. That’s the first time I’ve seen canoes on our club water, access is difficult both up and down stream so this pair must have been particularly determined. Anyway, had lunch and moved upstream, conditions improving all the time but no offers to spiders so switched to a black bead head nymph in the edge of the flow which produced a lovely wild fish of a pound and a half. Twenty minutes later and after a couple of twitches, another nice fish to the net on the same fly. I made my way downstream and the late afternoon was beautiful, a pleasure to be there; I saw two kingfishers chasing each other at top speed up and down and I wonder are they territorial even out of breeding season? Fluked one more wild fish about 8oz while not paying attention before calling it a day. Happy with that.

After a few weeks of not been able to fish due to very high waters and after the rain though the week i thought this weekend was a no go as well but the river lowther came to the rescue dropping in nicely still a little higher than i would have liked but but it was running pretty clear and a nice flow through it i started with nymphs and with in a few casts i had my first fish the size of my little finger with a size 16 ptn hanging out of its mouth . a few more casts and a slightly bigger fish this time 6inches this carried on for a few hours 6 fish in total brought to hand . I then switched to dry fly and had another 2 but still nothing bigger than 6--7 inches . But at the end of the day im pretty happy as this is a river that ive never caught a fish on before had fish on but they've always been the long release (

Had an away day as the local rivers need a touch of colour, fished a stretch I hadn’t been on for a couple of years, the first two decent bits of water had dog walkers throwing balls into the river for the dogs to fetch not far up from them I had my first few fish, a mix of grayling and trout to red tags and pnt’s after that it was mostly trout for a good while but later in the day the grayling started to show again, was having trouble seeing the indicator in some areas so put a bit of bright floss at the top where it connects to the FL, much better after that, not sure of numbers but plenty of fish, about thirds trout to grayling, I’ll put some pics up when I’m on the PC. 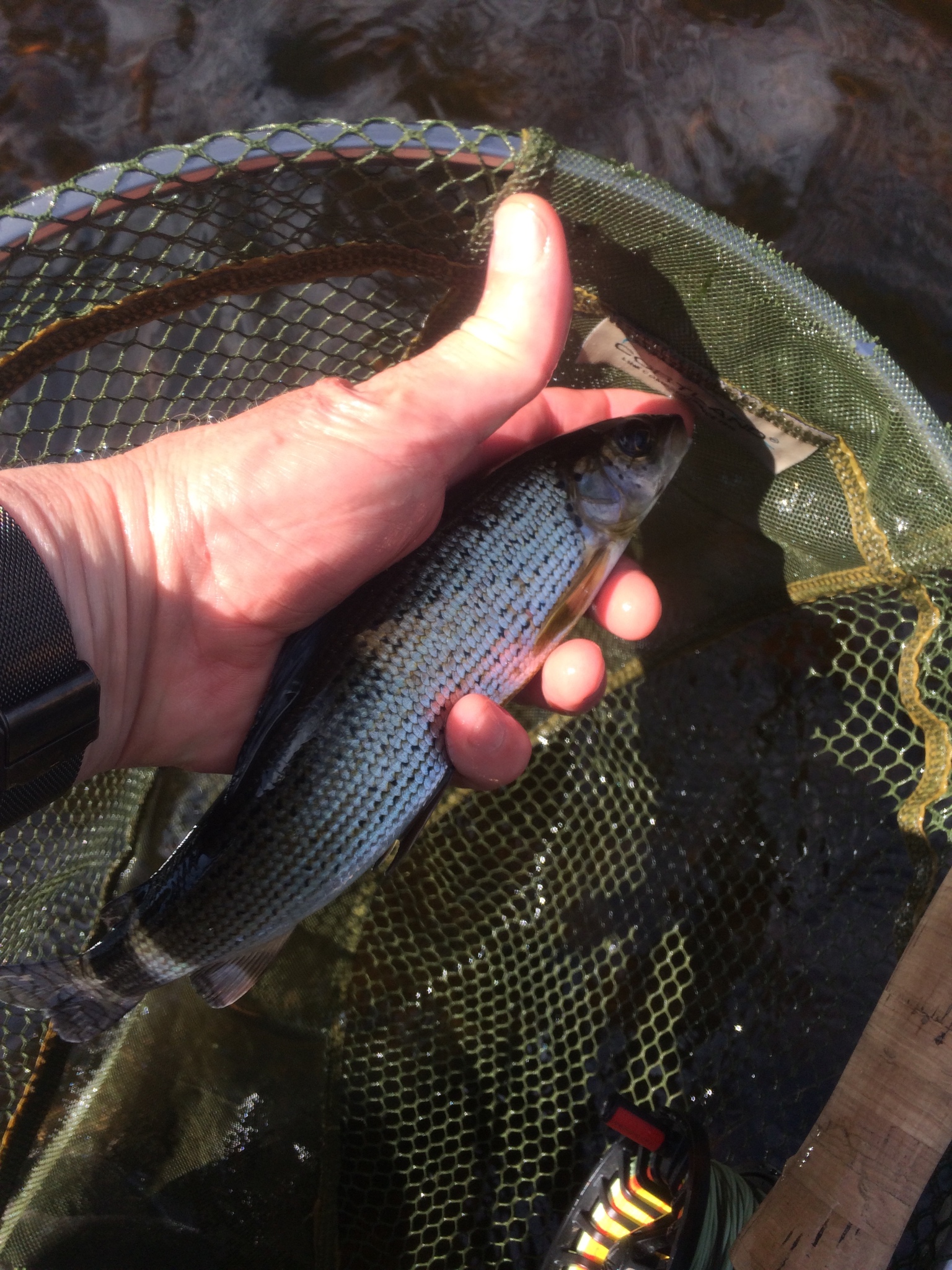 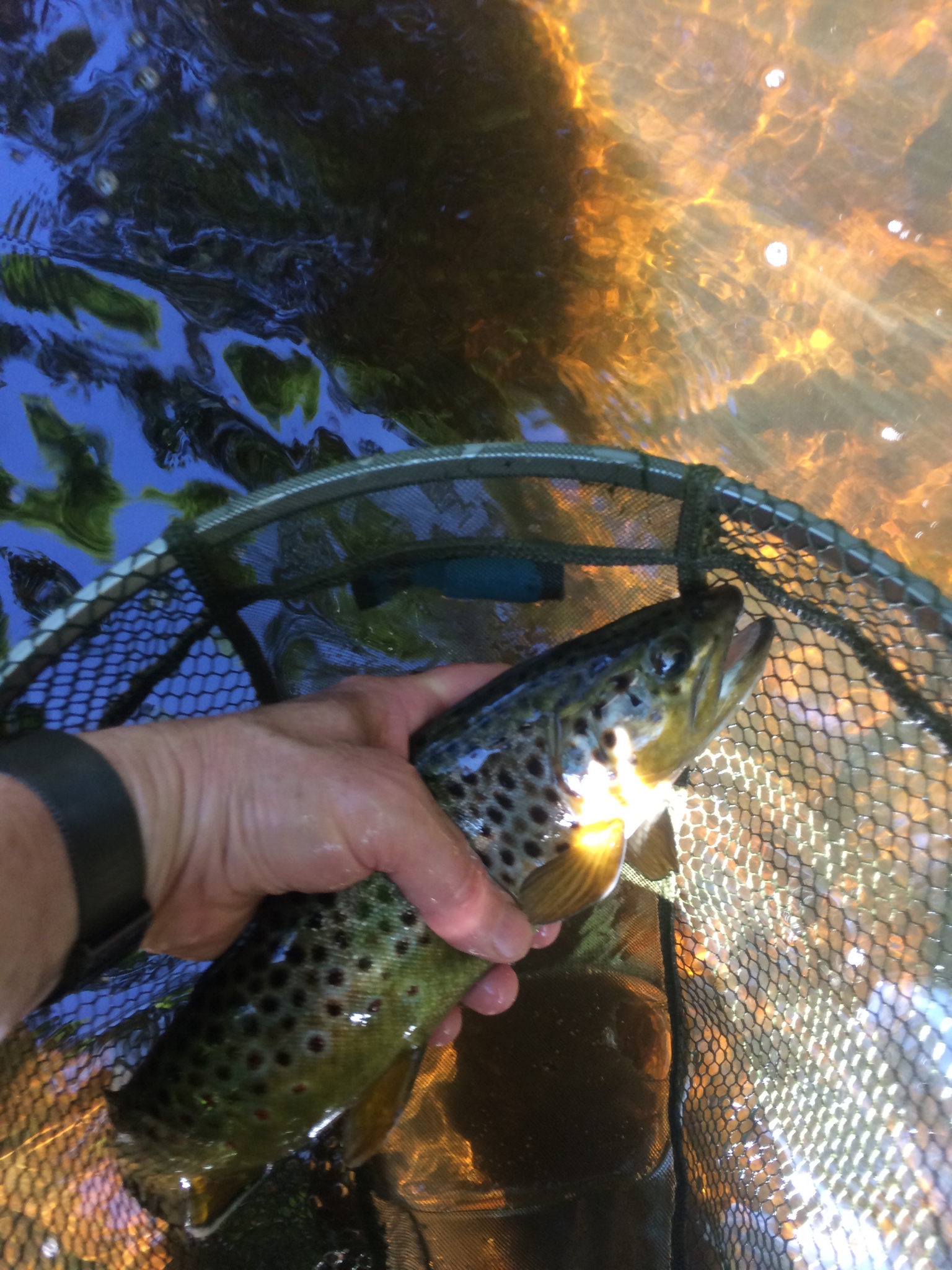 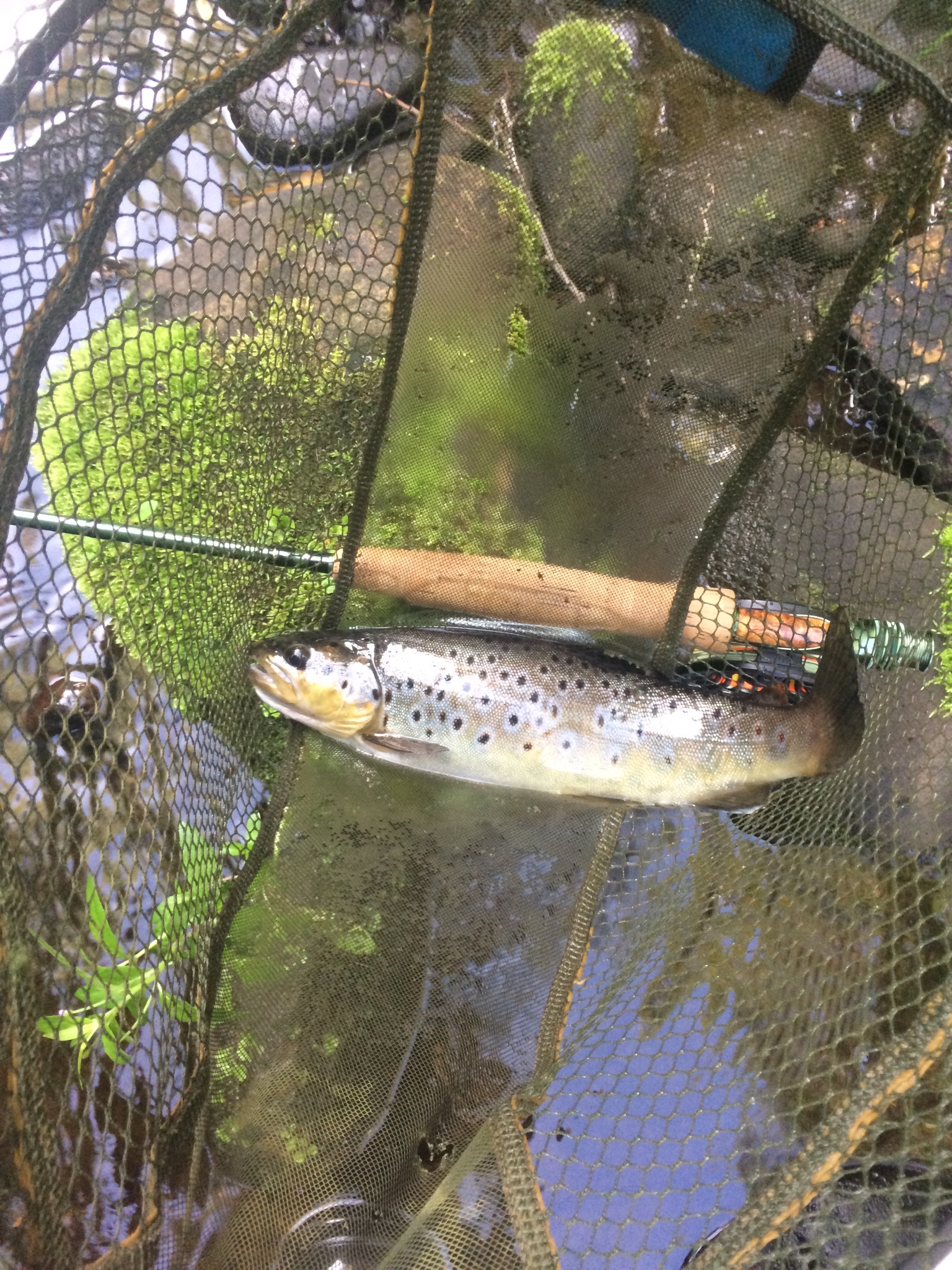 May not have internet access for the next few weeks.
I'll catch up on all your post then.

Get out there, keep fishing and keep catching.
I doubt I'll get a chance to get out myself for a bit.

Here is a photo of my pb brownie caught whist visiting Mr Trout in June this year.
This is also a test to see if I can upload a photo as I've never tried before so apologies in advance if I fail miserably !

Whoopee, it worked, must remember to only tap the button once though !
After all these years I can now post photos, watch out

Here are some pics of my trip to Wales and Penrith in June.
A big thanks to Luke Bannister, Mr and Mrs Richfish, Tony Mair, Jon TFC, Mr and Mrs Trout and the Eye and Usk passport scheme for making it special :thumbs: