An interesting article on the BBC website.
One of the UK's rarest fish getting a chance to return to its historical breeding grounds on the River Severn.
The little-known twaite shad, a member of the herring family, was once common in British waters

I haven't caught one, though was unsuccessfully casting a fly over a large shoal in the lower River Suir one evening (about forty years ago)
The article also mentions barriers such as weirs, dams, hydropower structures and culverts.
The high number of barriers make it difficult for migratory fish to complete their journeys to reproduce and find food.
Tell that to the Beavers 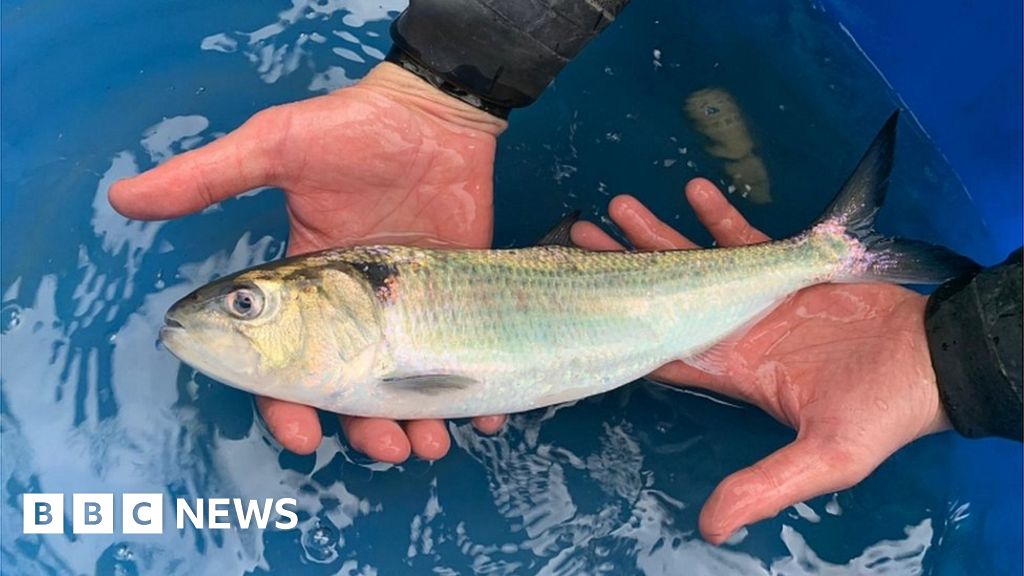 One of the UK's rarest fish is set to benefit from a conservation project to unlock the River Severn.
www.bbc.co.uk

I caught a Shad on the upper Wye an few years back.

I was nymphing in a deep run and as soon as I hooked it I could tell it wasn't a trout. I thought it may have been a large Grayling (as I didn't have much experience of those at the time).

It stayed deep and made short, heavy runs up and down stream within about a 10 meter 'pool'.

As I eventually got it to the surface I saw the solid silver flank. It was immediately recognisable as a sea fish.

I'm not sure if it was an Allis or a Twait, as I released it as quickly as possible, but it was certainly an experience. Hopefully we will see more of these fish in our rivers.
J

Well done.
When I returned to The Suir, a couple of weeks later, the Shad had gone. I was informed that the smallest of spinners would have offered a good chance
Another species that I doubt I will get the opportunity to catch, and can add to a list of UK species such as Char, Sturgeon, Pollan, Powan and of course, Burbot.
T

Fished the Wye at Symonds Yat back in the 80's and they were regularly caught expecially when using a small Mepps.
G

It'll be interesting to see how much of a comeback they make when all the fish passes have been completed on the Severn.

Strange how there's no mention of the weirs at Gloucester yet they mention Diglis as the first barrier.

I've never fished for them, they're protected as far as I know, but I know of a few coming out of the lower Severn.

A fantastic fish !
And it's great to see them during the spring run.

Protecting them seems to be a single point focused on a single species,but it's certainly much more. By protecting this one, many other species are too.

On the Aulne (Brittany -France), they have started unlocking during the run couple years ago, results are very good.

On the Wye some called them "Mayfish" and they appeared at Monmouth around this time of year and were present until around late June. You could stand on bridges and see shoals of 50 or more moving purposefully upstream. There are very few barriers on the Wye and they certainly get as far up as Builth and into tributaries like Ithon, Irfon, Lugg and Monnow. I've seen 3" long juveniles so know that they spawn successfully.

They were so easy to catch that many of the local kids had their only fishing outings for them and landowners and police turned a blind eye to dozens of kids fishing from the bridges. They could be caught on anything silver and flashy, some used the silver paper from cigarette packets others used fly spoons or small Mepps and catches of 15-20 per session were quite normal. The lure had to be small as they had difficulty in taking bigger lures, they were a complete nuisance whilst salmon fishing with 2" devon as they tended to "bump" it on every cast without taking it properly. I caught many fly fishing with a small Baby Doll.

I used to catch quite a few whilst fishing for chub with a floating crust, especially as the light faded and the shad were spawning in the shallows. I'm sure that they were not feeding and mostly took a sunken crust as a "lure". They fought well for their size, quite airborne, like a mini tarpon (to which they are related), a good one was 2lbs and very few that I caught over some 30 years had the black spots seen in most pictures.

Although very rare there were also the much bigger Allis Shad in the Wye, I never caught one but knew a ghillie who caught a 6lber near Ross.

I've written this in the past tense as I don't know the current status of the shad in the Wye, there was no shortage into the 90s but they were only ever found in very few UK rivers, many of them emptying into the Bristol Channel.
Last edited: May 11, 2021
S

There is one notable shad run in Ireland, at St Mullins in Co. Carlow. I think it is around this time of the year or perhaps a bit later. I think the lure of choice is the trusty Tasmanian Devil
G

I'd love to catch one on the Severn. I've a good idea where, when and how but as long as they're protected I'll play by the rules.
If they make a good comeback I might just get a chance.

glosterboy said:
I'd love to catch one on the Severn. I've a good idea where, when and how but as long as they're protected I'll play by the rules.
If they make a good comeback I might just get a chance.
Click to expand...

Tewksbury Weir was a popular place, they tend to congregate around barriers.

They're in the same gastronomic class as chub! Eat once....never again!

OMG, I am one of the few who have tasted chub. The small number of those qualified could well result from my graphic description of what it tastes like.
4

Around 1973-4 my wife and I were in a pub in the Forest of Dean I don't remember the name but the landlord had a voice box amplifier. He said the Shad would be running the next couple of nights, so we watched both nights and nothing. We did however have a storm that flattened the pines around the campsite like matchsticks. We were very cold but in the morning there was a chap in shirtsleeves in a Dandy camper reading a paper!. https://www.offthescaleangling.ie/twaite-shad-st-mullins/
Last edited: May 13, 2021

I caught one long time ago while retrieving my bait fish when fishing for zander. Very nervous and acrobatic.

That's a fish that scientists start to pay interest to in Southern Europe. Its populations have been dwelling since the late 90s', especially on French largest rivers. Reasons are multiple: dams for sure but also gravel abstraction, maybe pollution also. In the Garonne catchment is was calculated recently that the conservation limit might be above 300.000 individuals but we realized this too late: now there are less than 5.000 at best... In this case it was too late to state that fishing shall be limited within reasonable limits and it is likely population will never come back to its past abundance. It's exactly the same with same figures in the neighboring Dordogne. Don't ask me why they fished those ones, as it is said above it is in the roach and chub gourmet's class, i.e very, very bony...
You can note that is is really endangered fish, particularly in its southern range. It was extirpated from Morocco (dams).
Now you have to add some others factors: new predators like large catfish that specialized in chasing shads when they are making their noisy spawning "bulls" at night. It is well documented, sadly.
In the river Loire the mean temperature has rose by more 2°C in the last decades and spawning of allis shad is triggered by temperature: therefore they are suspected to spawn earlier and too much downstream, where they mate with twaite shad leading to hybrids. Those ones can spawn despite being unfertile... then the population decline is amplified as the spawning of such descendants gives no result. Same problems with introduced catfish also, as swell as asp, recently introduced also and that is probably feeding on young shads (and smolts!).
On the other hand as Simon said, the population in the small rivers of Northern Brittany and Normandy have better runs, thanks to barrier removal. But we are still far from the past abundance.

They are known to be prone to take brightly colored and flashy "nymph" style flies (#4-10 as far as I know), dredged close to the bottom. Large female can reach 7-9lbs.