Trout from the Tiber (Italy)

The Tevere (Tiber) river is one of the longest in Italy, flowing through Umbria, Tuscany, and then Rome, before entering the Mediterranean. For most of its length it is heavily abstracted, slow-flowing, and very poor water quality: carp and various introduced bass are the best a fisherman can expect.

But, in the 1980s, the Montedoglio Dam was built about 10km above Sansepulcro, in Umbria. This created a relatively short (c.8km) “tailwater” stretch of the river, with far more consistent flows and lower temperatures than anywhere else on the river.

The Mosca Club Altotevere (upper Tiber fly-fishing club) took responsibility for the stretch about two decades ago, did initial stocking of both trout and insects, and run it as a catch and release stretch of the river, now called Tail Water Tevere (TWT).

I had a whole day with guide Luca Castellani (www.lucacastellani.it), and he was well worth it. He can supply all waders, rods etc, but was happy for me to use my own rod – a 6’6” 3-weight glass blank that I acquired recently from a fellow forum member and made up as my first foray into rod building. Luca’s insistence was that:
1) No leader heavier than 7x was used,
2) 12ft was better than 9ft, and
3) We use his flies!

He changed flies regularly: normally in Summer there is a good hatch of blue-winged olives all day but, due to high air temperatures and falling water levels this year, we did not benefit from this until early evening. So we mainly fished terrestrials: a simple green foam hopper/caterpillar about 1.75cm long, and a similar-sized foam Black Ant/beetle. Luca likes these to land with a “plop”, and frequently we could see fish move in the crystal-clear water, and inspect the fly. The “Rejection to Takes ratio” was horribly high, though! I also had good success on my last morning, and my two largest single fish, sight-fishing a size 18 goldhead Pheasant Tail nymph.

• Some deep pools below three large spillways had large numbers of well-educated trout, many stacked in the faster water across the bottom of the outflows, which looked 6 inches deep but was closer to 2ft.

• Elsewhere, the slower, even shallower, stretches that I would have avoided in the UK also held trout, but the 7x leader was utterly essential! Generally, fishing in the shade, and along the banks worked best.

• And, towards the top of the water, we fished a heavily tree-lined tunnel of deeper, faster-flowing water where the trout seemed to respond best to absolutely tiny BWO-type flies. But many needed several dozen casts to raise, let alone hook.

The quality of the trout was simply amazing: they averaged over a pound each, the largest double that, and most had extraordinarily large orange spots that shone gold under water in the sun. And two fish that we saw in the tree-lined stretch were estimated by Luca at >70cm: I shudder to think how short the fight might have been had I hooked one! But a relatively soft glass rod and gentle drag definitely worked in terms of holding on to hooked fish.

This part of the river is pretty heavily fished, especially in high summer when it has some of the only fishable water within three to four hours’ drive. The good news is that the trout are not terribly afraid of humans, seeing multiple anglers each day. But they are incredibly educated: long leaders tapering to 7x make a noticeable difference!

Overall, this fishing transformed what for me had been a rather dreaded family holiday: I had no idea Italy had trout fishing of this quality, especially so far South, and at the height of a hot, dry, summer. And, at €15 per day (plus the €18 State licence for a week), the fishing is incredibly good value.

Those trout are simply stunning. Someone will be along shortly to explain which variant they are, I'm sure!
L

Nominally the Adriatic/Apennine strain of the brown trout, Salmo [trutta] ghigii, although what goes on at the hatchery is anybody's guess (I've seen stuff that will have you shaking your head).

If I may, for reference, here are:

Two little wild ones from the Aniene, a tributary of the Tiber (Tyrrhenian drainage) 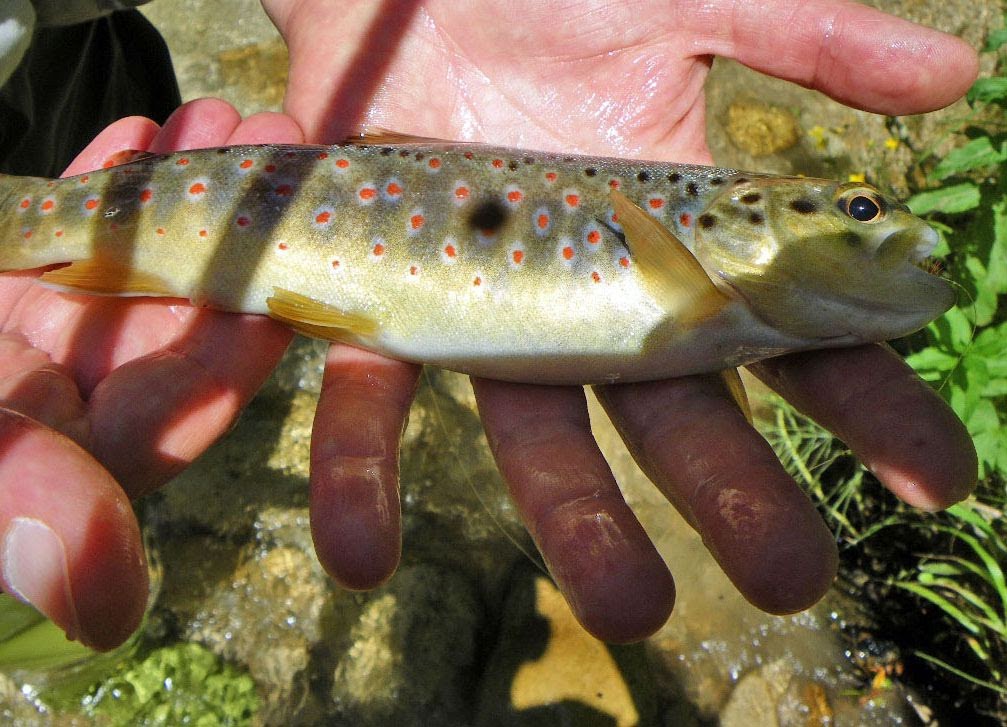 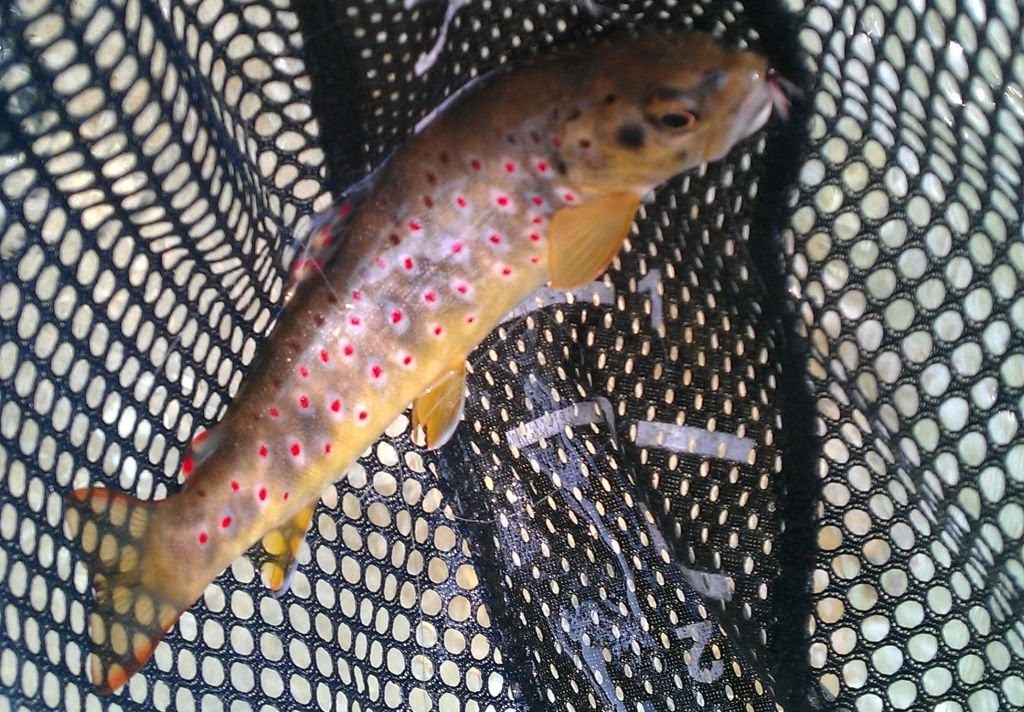 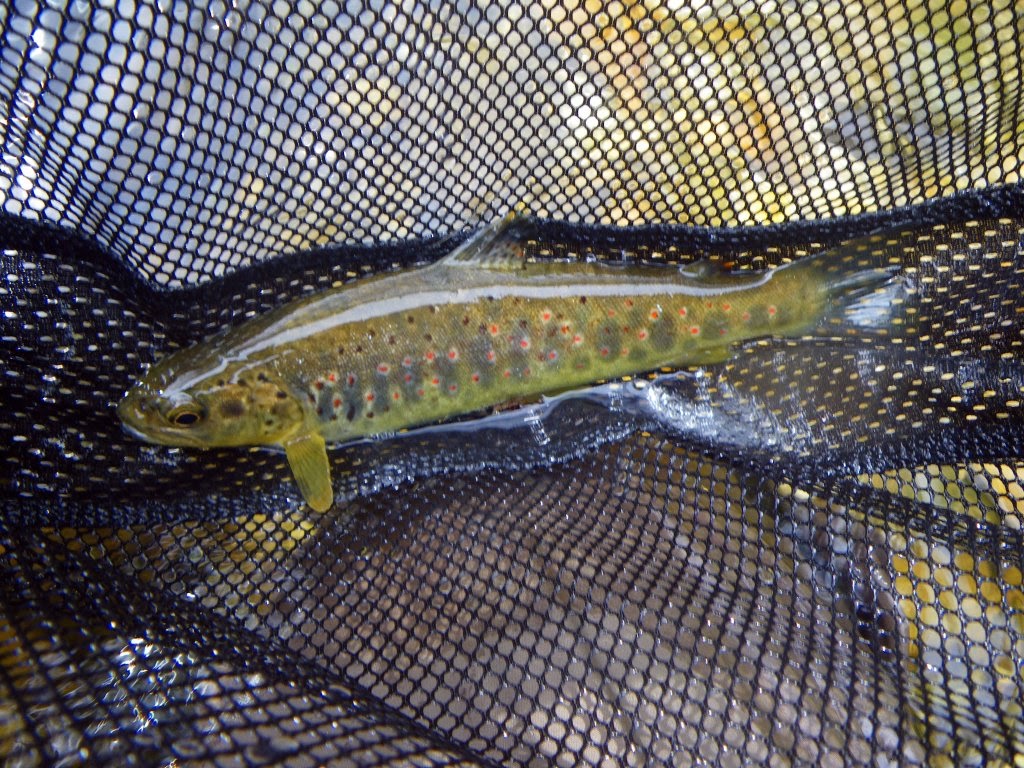 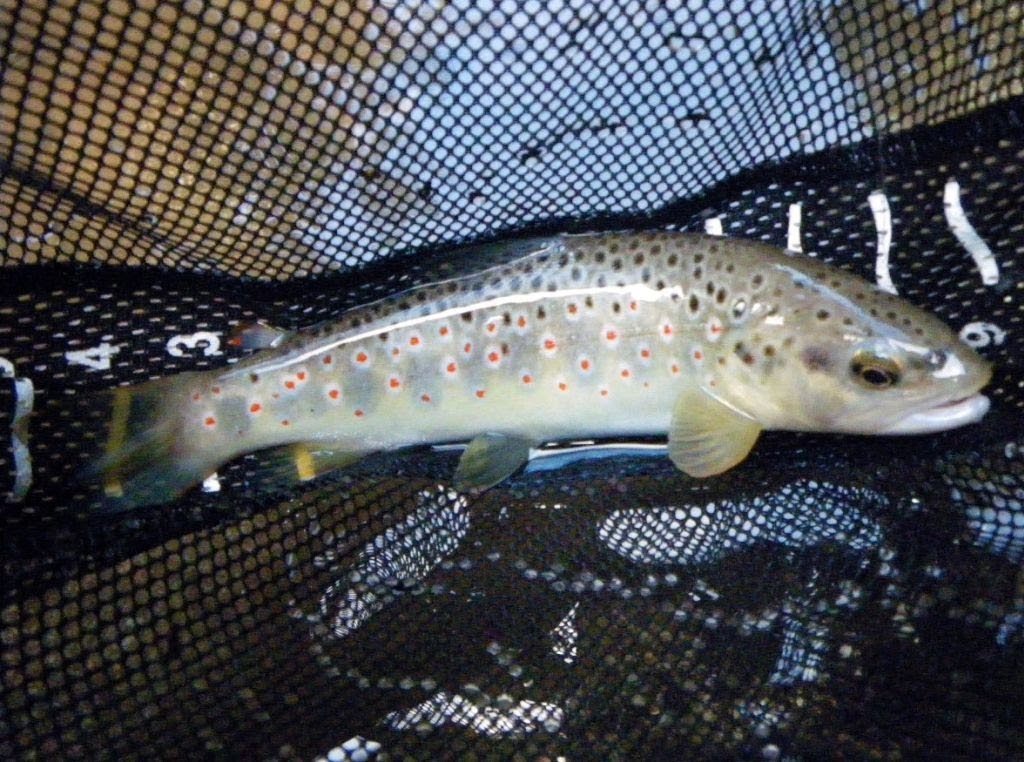 Nominally the Adriatic/Apennine strain of the brown trout, Salmo [trutta] ghigii, although what goes on at the hatchery is anybody's guess (I've seen stuff that will have you shaking your head).

If I may, for reference, here are:

Two little wild ones from the Aniene, a tributary of the Tiber (Tyrrhenian drainage)

What a lovely selection of wild brown trout!
I am still not convinced that I could correctly identify an Adriatic brownie from a Tyrrhenian one, though!

The TWT trout must have stocking, if only to stabilise the population after winter flooding: in ?2013 the dam actually partially collapsed! Still, for €21 per day (my average in-price), this was some of the best (and best value) trout fishing I have had in a very long time.

And it was great having lunch in a cafe where the other guests also wore waders!

Just for information: these big red/orange spots fishes (the first 2 fish and the last one) are actually stockies... They are called "Puccini trout" and all come from one single fishery with a "genius mad scientist" guy having perfected the "strain"...
Don't get me wrong they are good catches and awesome looking, but unfortunately not wild ;-)

The TWT is nice, and a challenge. I wonder if the grayling are still there, haven't fished it since 2012.

Since the cat is now out of the bag, thanks to Pati , the trout you caught came from the Puccini hatchery, about 45 miles away from Sansepolcro, with genetic "manipulation" producing the day-glo orange spots that get their basis from the bright orange/red spots, almost always with a white halo, found in wild trout, hence my photos for "reference". BTW, for a fee the hatchery will let your kids fish from the trout tanks. Adults can fish from the lakes.

You will also find trout without these day-glo spots at the TWT.

Not meant as a criticism whatsoever, I know what a daily session on a chalkstream beat costs in England, but here in Italy €21 for a day's fishing is what I would call "not cheap". Most rivers require only the national fishing license.

Some, like the TWT, are "managed" by concession-holders, either a fishing club/association or the municipality/province through which the river flows, and these will charge additional fees, usually €10/day, or up to €100/year.

Does it have a closed season?
S

Yes: I think December-March.
The club website is pretty good, and has a translate function:
http://www.moscaclubaltotevere.it

@kenneth: you are very fortunate! €21 a day for any river fishing like this, not even on a chalkstream, would be almost inconceivable in the UK.

My next plan revolves around a planned visit to Milan in late-September or mid-October. I have heard that there are trout rivers flowing into Lake Como - can't wait.