8 of us had our first trip up to Vyrnwy Saturday just gone. We had just over 70 fish to our four boats, the vast majority of which were brownies.

We fished out of the dam end and successful flies were pennells and, particularly, a weighted hare's ear nymph.

Weather was better than we thought it might be, although we had a slightly 'funny' wind which made drifts parallel with the bank a bit tricky at times.

You could also see that spring hadn't quite yet fully arrived, some of the lambs were still tiny and the bushes and trees were still awaiting their full flush of greenery.

Nice to get out again, blow the cobwebs off and being in such a spectacular surrounding obviously helps.

We also only used one battery all day which was still going well after 7 hours; anyone who has fished Vyrnwy will know how remarkable that is!!
M

Thanks for the update. Went at the end of March. My brother treated me as part of my pre-wedding preparations. We only caught four fish over a day and a half, however, my brother did hook into one of the dolphins at Cedig :fish:

All, I'm starting a new Vyrnwy thread which can be accessed here: Lake Vyrnwy - Updates and Discussion
G

Apologies if I'm being a bit daft, but what are 'the dolphins at Cedig'?
M 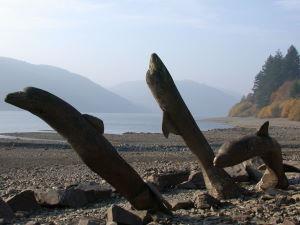