Do you think I could get another turn out these xmas lights?

Derbyshire Wye. It is

heathenwoods said:
Derbyshire Wye. It is
Click to expand...

Well, it couldn't have been a Yorkshire river, othewise it would have told us all that it was!

Just seen a ten day forecast, heavy rain and wind on saturday, all of next week wind with showers.

Im meant to be heading camping to the nore next weekend, i dont think ill bother.
D

Had a great day, 4 browns and 2 chubx in about 2.5 hours. All on my self tied rabbit and cdc nymph. Got a miss on dry fly but more action on nymph still here 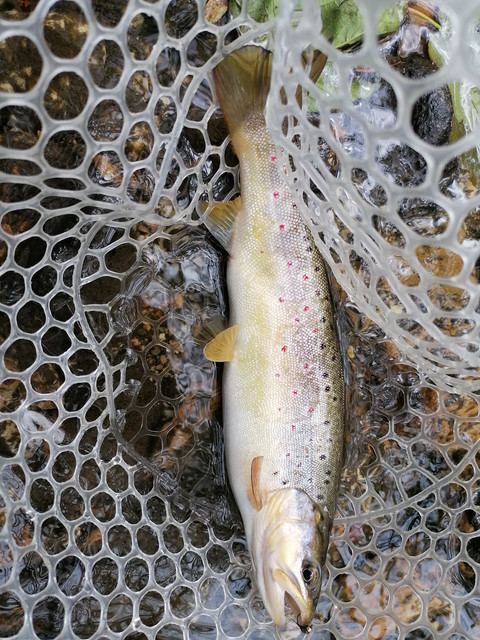 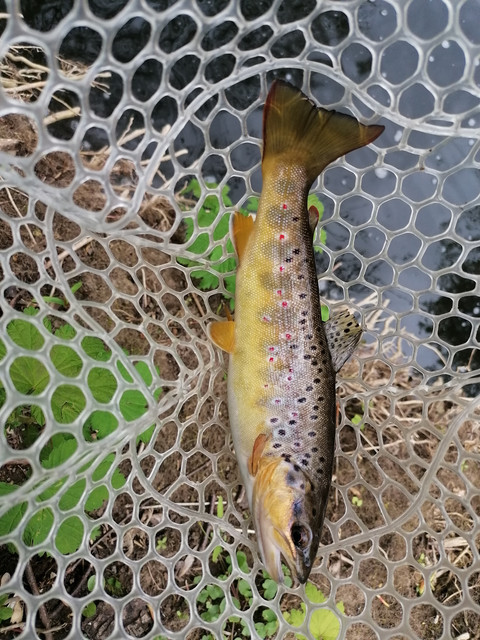 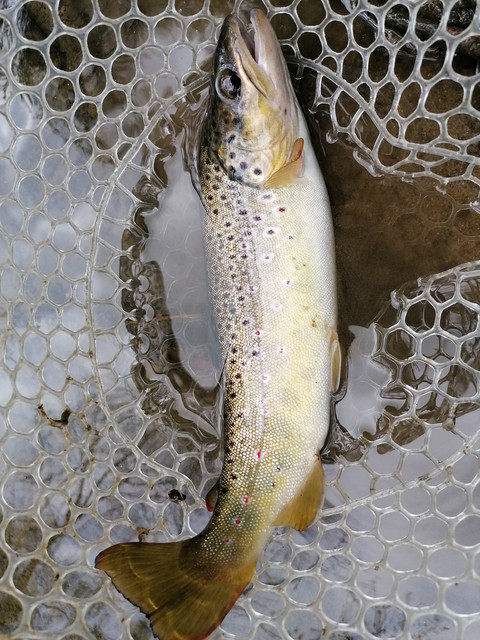 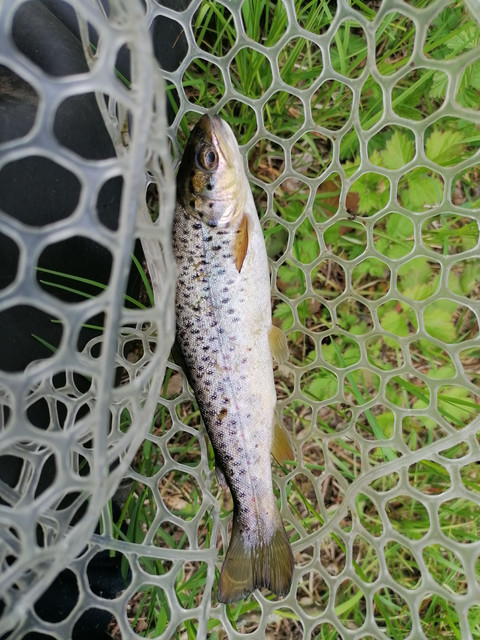 Snow on the ground this morning when i was driving to a river .I haven't fished there from before covid.What a cold miserable day.The river was chocolate brown & it rained all day.Think i caught around 10.Surprised i caught any with the water colour.Anyway had to try my new Vision Nymph reel.What a lovely reel it it has a great drag.Cheers

When out for a few hours again today after yesterday's fiasco.
Caught 3 trout in the first 1/2 hour or so, all on nymphs.
An out of season cracking grayling later on.
There were a few fish rising on the flats of a pool. I thought they were small grayling but they were trout.
I've managed to land 2 on a small sedge dry and missed another 3. First one through some slack on the fly line, second one because I was moving upstream (I always try to remind myself to move between casts not during a drift), the third one I wasn't expecting it and it was too quick

15 minutes or so of activity and then it went dead on the surface, but decided to call it a day and not go back to a nymph setup.
There's light at the end of the tunnel

rabmax said:
Snow on the ground this morning when i was driving to a river .I haven't fished there from before covid.What a cold miserable day.The river was chocolate brown & it rained all day.Think i caught around 10.Surprised i caught any with the water colour.Anyway had to try my new Vision Nymph reel.What a lovely reel it it has a great drag.Cheers
Click to expand...

These fish are beauties rabmax - They look incredibly fat.

Yes they had been feeding hard..Caught most on a size 18 cream micro mop fly.There was 3 trout started rising taking LDO's.I had a twin wire olive Perdigon on the top dropper.Caught the 3 of them on the micro mop.They wouldn't look at the twin wire olive.Think the cream mop was getting action as it shows up in chocolate water.
D

Great fish. My fish also were in great shape. Do you also feel they now fight harder than in early season now that the water is getting warmer?
R

Dominikk85 said:
Great fish. My fish also were in great shape. Do you also feel they now fight harder than in early season now that the water is getting warmer?
Click to expand...

Yes great fight.Don't know about the getting warmer.Scotland has gone back to winter.Never known a season start like this.Drought in March & mini heatwave. Then snowing again in May.At least the trout are switching on now.

On the Ribble for a couple of hours today.
First up was a nice grayling - in beautiful condition and fought hard. A couple of small brownies (all on a heavy Czech nymph) then a hail shower on the Easterly wind. No rises or any sign of a hatch. Decided enough was enough and went home.
The fish and the weather made it feel like early March rather than early May!
Chris

I had a pretty similar experience. It was a bit chilly today but, like a fool, I was misled by the sunny start to the day and left with one too few layers. So, I freezing my vitals off for most of the day but the river was near to a normal height and was carrying a little colour in it. I saw one small upwing hatch but otherwise all was quiet. I'm pretty certain we'll be looking forward to the junefly hatch this year.

Nevermind, klink and dink it was. And the same #18 black ptn, pink sparkly collar and silver bead caught my first ten fish and the eleventh came up and snatched the klinkhamer. I then realised it was getting close to time to go if I wanted to get back at the same time as my daughter (her first after school club in...quite a while today!) and hurried past some very tempting riffles and pools. It was a lovely 3 or so hours and it was just as well I left when I did as I got call when I was 15 minutes from home, 'Dad, I forgot my key...'

I had five of these and the rest were brownies.

And relax.... It’s been manic at work, so a Friday day off, back over to the Piddle in Dorset.
plenty to hand... but the large ones alternated between slipping the hook after a minute or so... or just buried me by disappearing into large undercuts....
trouble with large fish in the Piddle... there isn’t much room to work with
thankfully my fishing skills were better than my photography.... only one photo that wasn’t blurred 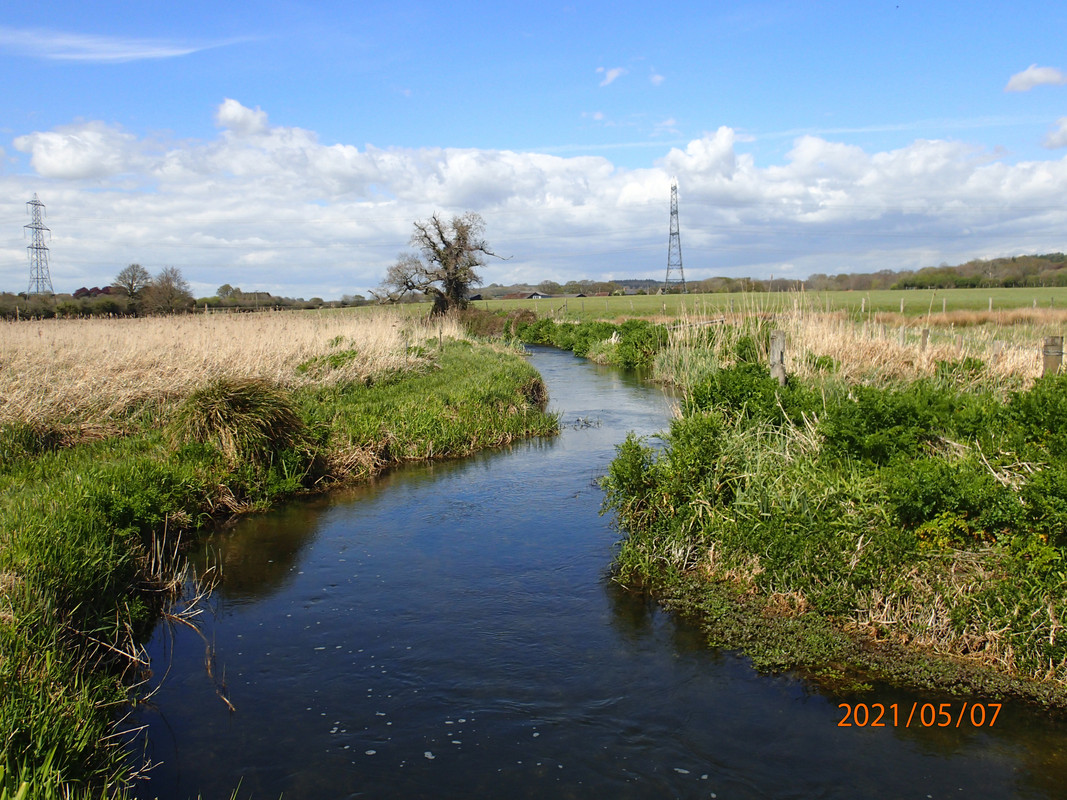 Even though its about 5 degrees colder than normal, things are kicking again off here in Cork. Was out Wednesday and today and a nice few medium size olives coming off and fish rising to them now.

Today I was fishing a size 16 rusty coloured klink and I lost count of how many fish I took on it. Mostly small fish but the best was a lovely fish of about 11 inches in great condition

The forecast for tomorrow is awful so dashed out for a few hours today. There was more on the surface activity than the last couple of days. There were a mix of big and small rises.
I could not reach to the fish casting upstream as it was a long and deep pool so had to go above the fish. Waited for a bit and saw a head and then tail rise. I knew it was a decent fish. It took a size 14 elk hair caddis I tied last week and off it went. I've tried to keep it away from some underwater branches but remembered that I only had 6X tippet on so I was really nervous it would break me off, specially after it saw me and bolted downstream.
It was much bigger than I thought once it was in the net. Really well fed and solid fish.
There isn't a grassy bank where I could lay it flat but gauging by the net and the pic I reckon it could be about 19".
Really pleased with that.

Yes that's a beauty indeed. It looks like it has been feeding hard.

Thanks, any idea what the weight might be? I'm clueless.