Does anyone bother fly fishing rivers for coarse species in winter? I am aware that swinging streamers through deeper holes is quite productive for chub.

So does anyone get out for coarse fish at this time of year?
F

Perch, pike are my main non grailing targets. Swinging streamers for chub sounds like fun but like lure fishing for grailing I would worry that it's not selective enough to avoid catching a lot of trout in my local waters.

I'm lucky enough to be able to get out to the local streams and rivers several lunchtimes a week.

I either target Roach, Dace and small Chub with size 16 or 18 GRHE, Black Pennels and sqirmy wormies (especially in coloured water). Or Perch on anything with a bit of weight and flash in it.

Yesterday I was on the small stream out the back of the office:

This one had eluded the heron, but fell to my fly: 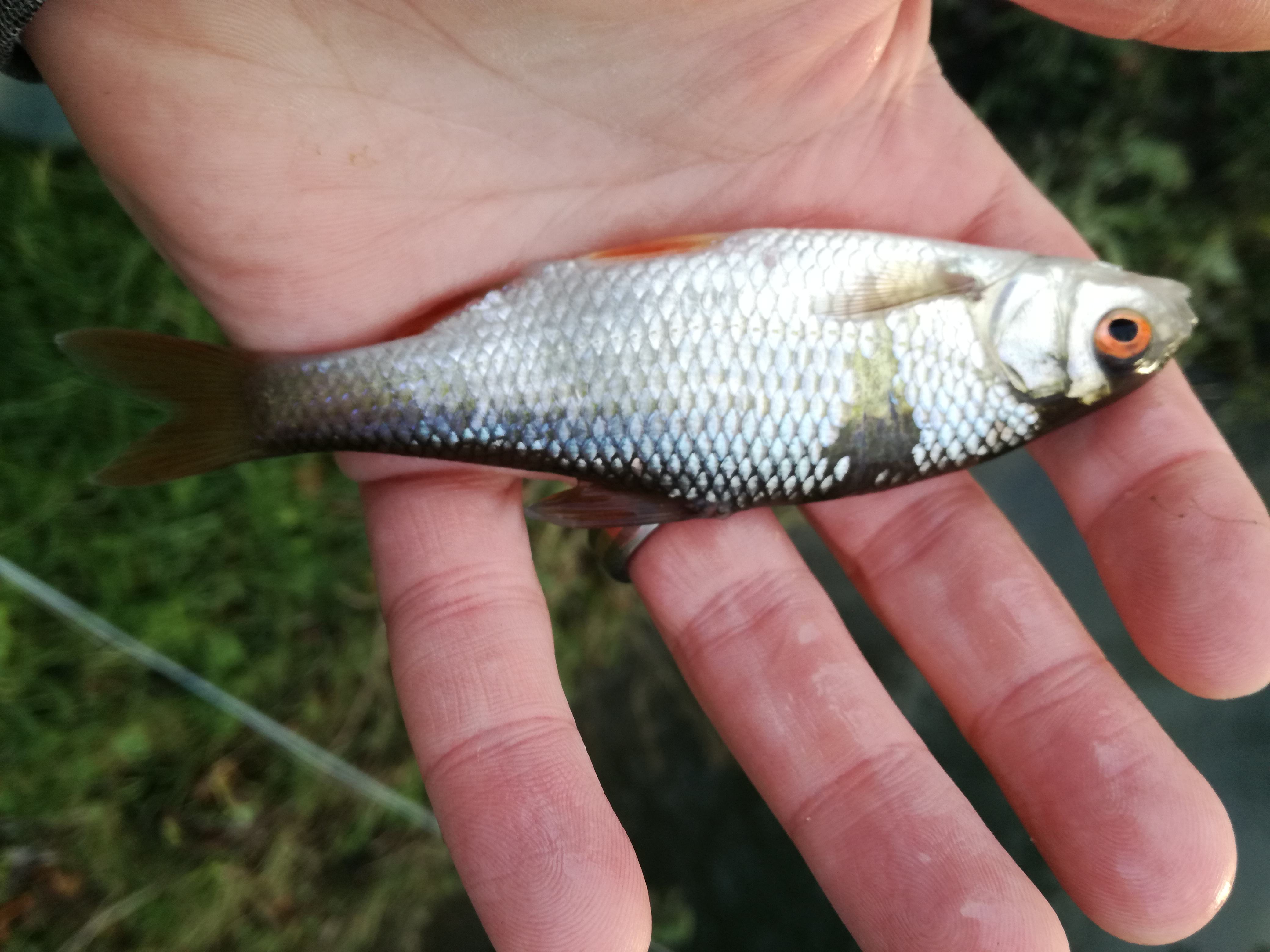 Catch of the day: 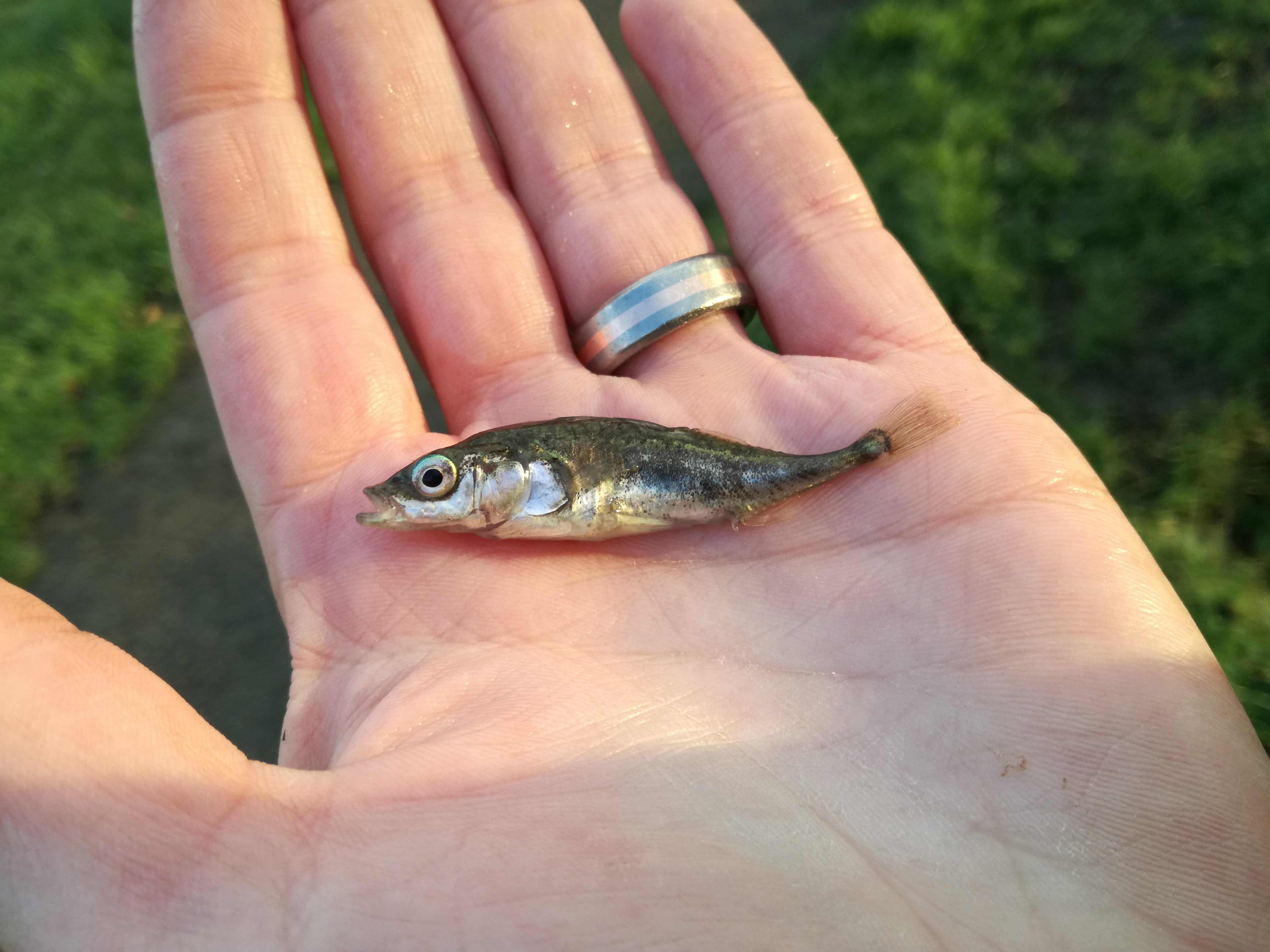 If this sort of thing interests you, there are some older threads on he packed with info.

Was out today fishing a tiny brook just north of Leicester.
Last year this brook was superb after a few seasons when it was barely OK.
Today it was off the scale!
Just under 4 hours of fishing and I'd caught 54 fish.
Loads of nice perch, about 10 dace (including some huge ones), about 10 chub up to around a pound, one small roach and a pound sized out of season brownie.
No pics. as my camera got drowned earlier in the year and I've not go round to replacing it yet.
Fished 2 flies on the dangle whilst wading to kick up a little silt as the water was far too clear for much action...that tip alone can make a huge difference to your catches.
Last weekend myself and Peter "bakerlite" fished the Ise in Kettering. We had around 75 fish between us despite it being one of the coldest days so far of the Autumn/Winter. I had 7 nice sized roach on tiny nymphs before going cruder for the perch and chub.
If you know the right venue winter coarse fish can be easier than summer fish.
They often shoal up tighter, weed has died back, banks are clearer and the flow is better plus you won't have overhead sun sending them under the banks for cover.
Dee
L

Chub on clousers are do-able, seem to get the better fish with them too.
F

If the storm does not happen I will try my hand at swinging for some chub.
P

Yep in winter you can catch some really big fish on the right day¡
I caught my biggest fly caught roach on a black pennell, from the River Hull.
Last edited: Dec 6, 2017

Give me a coloured winter brook over a clear low one any day.
You don't need to wade so can keep warmer & you can catch far more from a swim. One or two from a "good" clear pool and everything will be spooked but the same pool when coloured may produce 20 or 30 fish.
You have to know the venue pretty well though as it can be hard to have confidence that a swim contains fish when it is chocolate coloured.

If it's bombing through a bit little tiny slacks often right in the bankside can throw up good fish. Any slack water next to a known fish holding pool can become a hotspot when the river rises. I often catch from slacks on the near or far bank that may be no bigger than my laptop.

It's raining now so fingers crossed the local brooks will be coloured for a change this weekend.

Off the back of this post I tried for Chub today with a black wooly bu99er, I caught nothing but Perch (not that there's anything wrong with that).

Even managed a double hook up with a GRHE size 12 as the second fly.

Chub are great sport this time of year as well on the chalk streams, winter doesn't seem to make much difference to them
Last edited: Dec 16, 2017
D

Location
Stow on the Wold

My local estate lake has plenty of Perch who are always up for a scrap. Only dif I see is they tend to have feeding times in cold weather. 1st hour, last hour and somewhere around 11am. Anything with a bit of red will do it. Red collar on a ptn for example. Can get them two at a time with the ptn set up. Only small fish, 4oz-1/2lb but great fun on a 6' 2wt.

I know a stretch of river where if there is a little warmth and sunshine (November mornings) the Roach are willing to do battle. Semi drowned dry fly seems to work. Roach are quick mind.

I've yet to get out on the river but have been very motivated by the pictures and stories!
B

I can only recommend fishing for coarse fish in the winter. Skateboard Dee and I have been doing it for nearly 10 years, I am still learning but if you know the venue you can have quite a few. Fish usually shoal up tight and if the the water is coloured (or you colour it up) you can often catch 5-10 fish from a small area, fishing a few miles can often produce +50 fish, about 25-30 per angler.

Without over-mystifying flies, their position, how you fish them and where you fish them can help cross the fine line between catching and not catching. There are subtle differences that can make a huge difference in your catch rate.

To give you an example Dee and I fished the Ise around Kettering and the water was clear. Initially we were struggling but going in the water way upstream of the good swims and fishing in our own murk produced well, 4-5 hours fishing produced about 75 fish in total and 4 different species.

Last week we found our brook up Loughborough way was flowing a bit, since majority of the water is straight it seemed reasonable to target even the slightest slacks. Due to the cold and miserable weather we did not catch masses but still managed about 40 fish between two of us. All the fish came from the slacks.

I know Jerry does well down Leighton Linslade/Buzzard way, we fished his water last year and it was great: bream, perch, dace and roach what we caught and quite a lot.

All I can say is get out and try it.

I've often wondered when grayling fishing or indeed trout fishing in my local beck that also has a large population of dace why I don't catch more of them.

Going on from what Pete says above, I normally do ok throughout the winter, but since the snow melted I've been having a shocker.

I've managed a hour here and there most days, but many of these sessions have been blanks. I don't know if it's the cold water (the snow has only just finished melting here), the salt being washed in off the roads or that I've simply forgotten how to fly fish in high water, but takes have been few and far between.

In desperation I even tried the canal yesterday, but it had been partially frozen all day:

On a more positive note, here is a beautiful river Perch from this morning;

I've just realised I should probably mention that while the snow was still on the ground the fishing was actually quite good.

A selection of venues and catches: 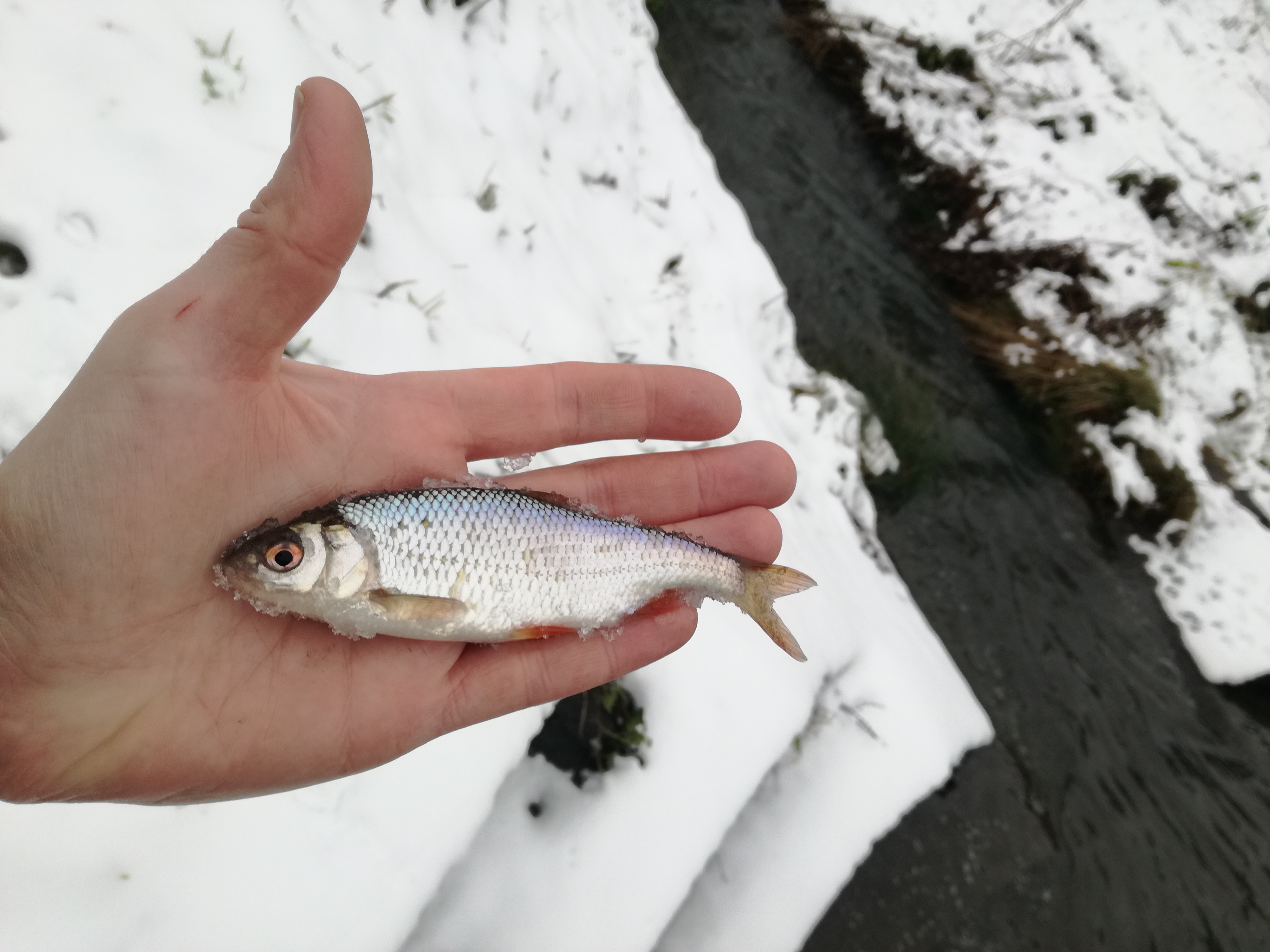 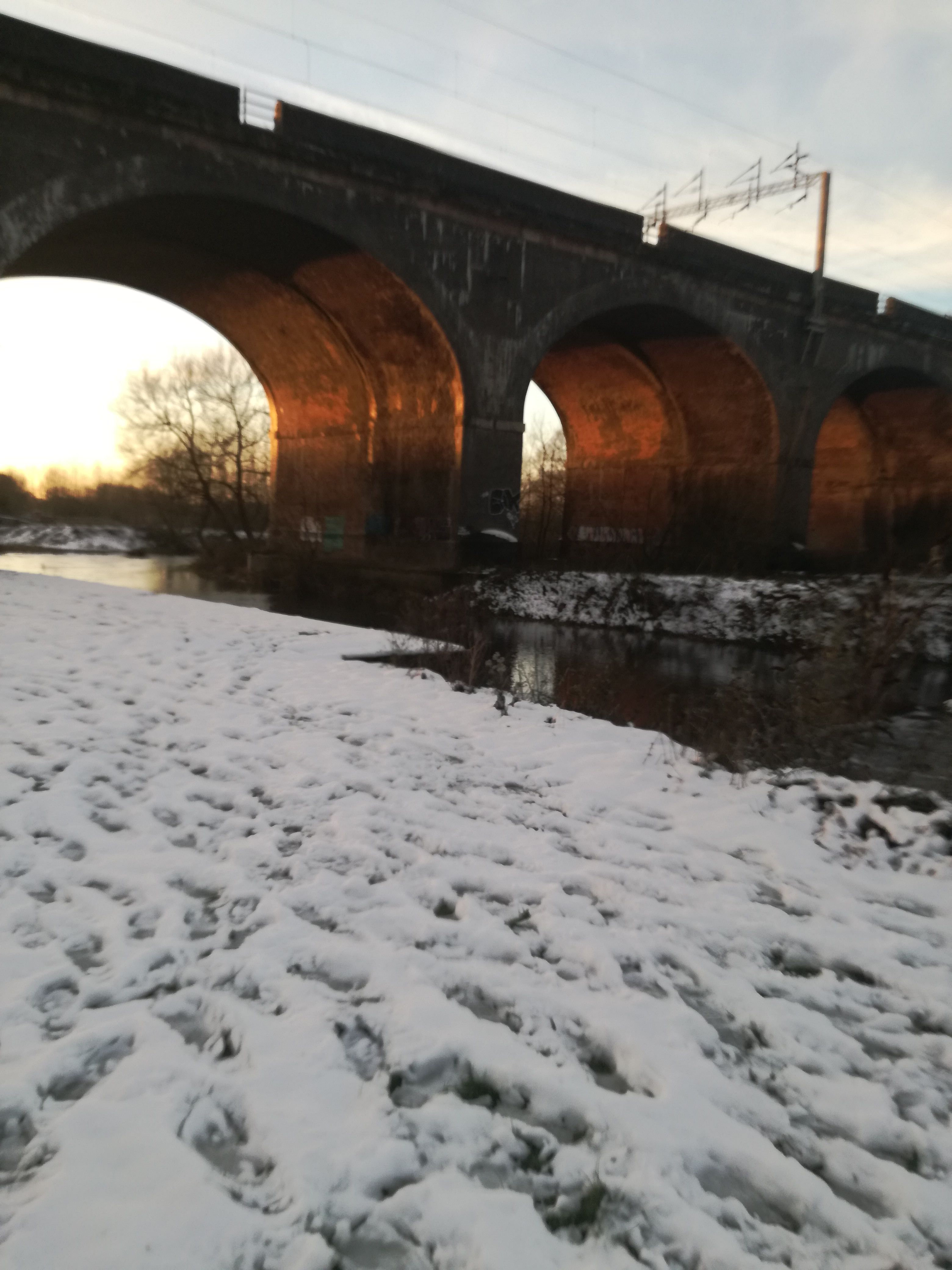 All fish swam away safely, despite being dropped in the snow (I had very cold fingers!).
C

Some cracking reports on winter fishing, cant wait to get out and wet the line!!

Trout and Grayling tend to be more easily fooled than most coarse fish IMHO.

As SKB said, trout and grayling are more active/faster to the fly than coarse fish but that isn't the main reason.

The biggest reason is the way most people fish.
Classic trout/grayling fishing involves casting upstream, the vast majority of the time or down and across but then with very light wt. flies.
Neither of those tactics will produce coarse fish in winter save for the very odd one.
To consistently catch you have to change the way you think and fish. It then becomes just as easy as trout or grayling fishing.

Fish either directly downstream or with just a very subtle across drift...no more than an inch every few seconds. Also fish flies that will hit the bottom in the areas where you think the fish are...that often means much heavier flies than you may think. A cast made upstream with a couple of mm tungy bead fly attached may hit the deck after only 5/6 foot of drift back towards you. Hold that same fly on a tight line downstream though and it'll be hanging just under the surface in anything but almost still water.

Like when grayling fishing I often(pretty much always!) use a bigger heavier "sacrificial" fly on the top dropper with the lighter "taker" fly dangling downstream of it on the point position.

Coarse fish simply ignore flies/nymphs that drift past then at the speed of the current in cold conditions. I've witnessed this thousands of times over the years...this isn't some theory I have it is a cold hard fact!
In warm water the odd one will take but still not as readily as game fish. When it gets chilly though you need the flies to hover just in front of their noses.

There is a reason my average catch from brooks so far this winter is around 30 fish a session.

Told the wife I had some last minute xmas shopping to do and sneaked off to the local beck:

I managed to slip down the bank and fall in. Had to creep back in to covered in mud with one wet foot.

As if to prove Dee's point (above) I started fishing with a single copperhead fly (#14) and caught only minnows: 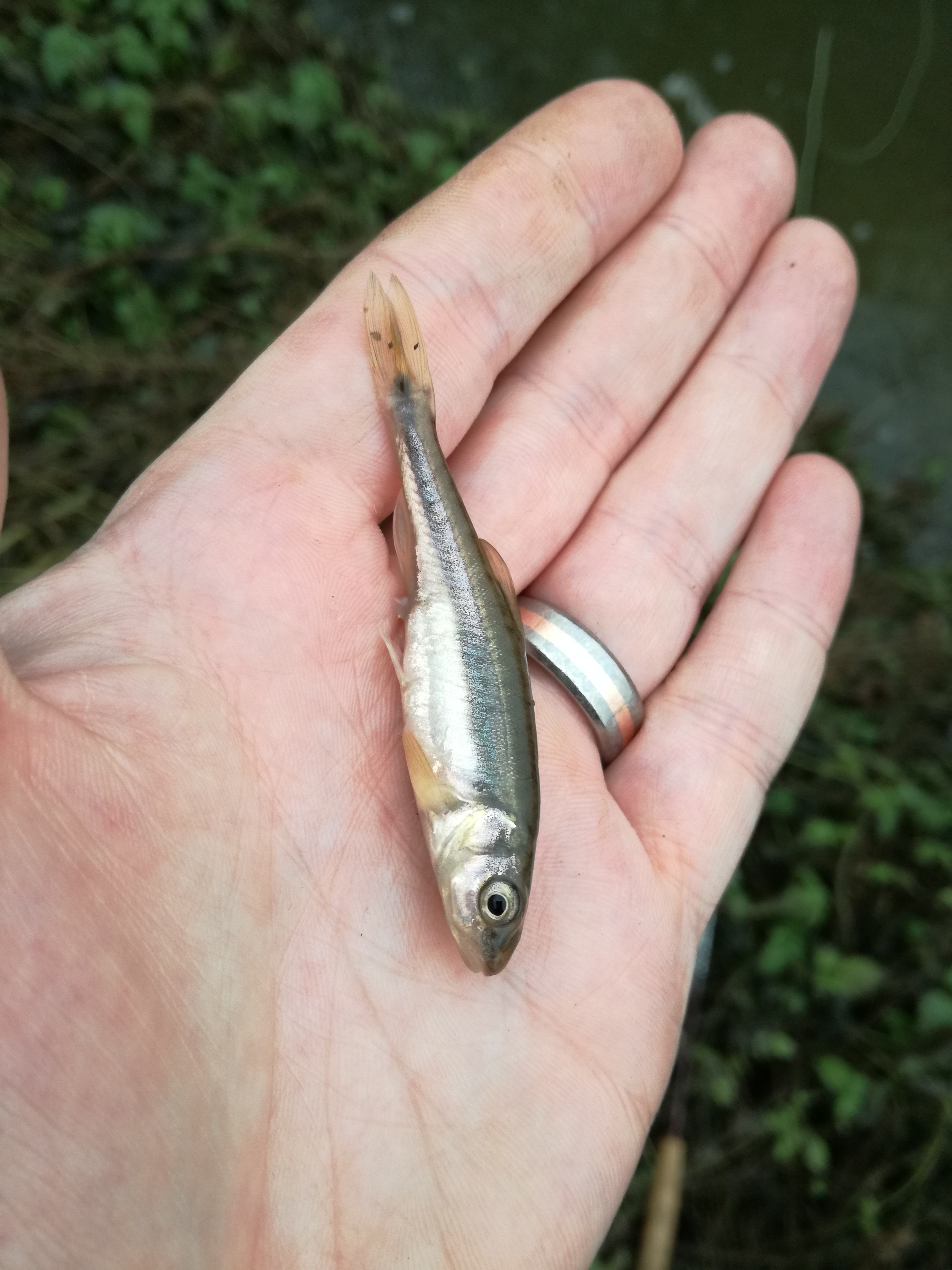 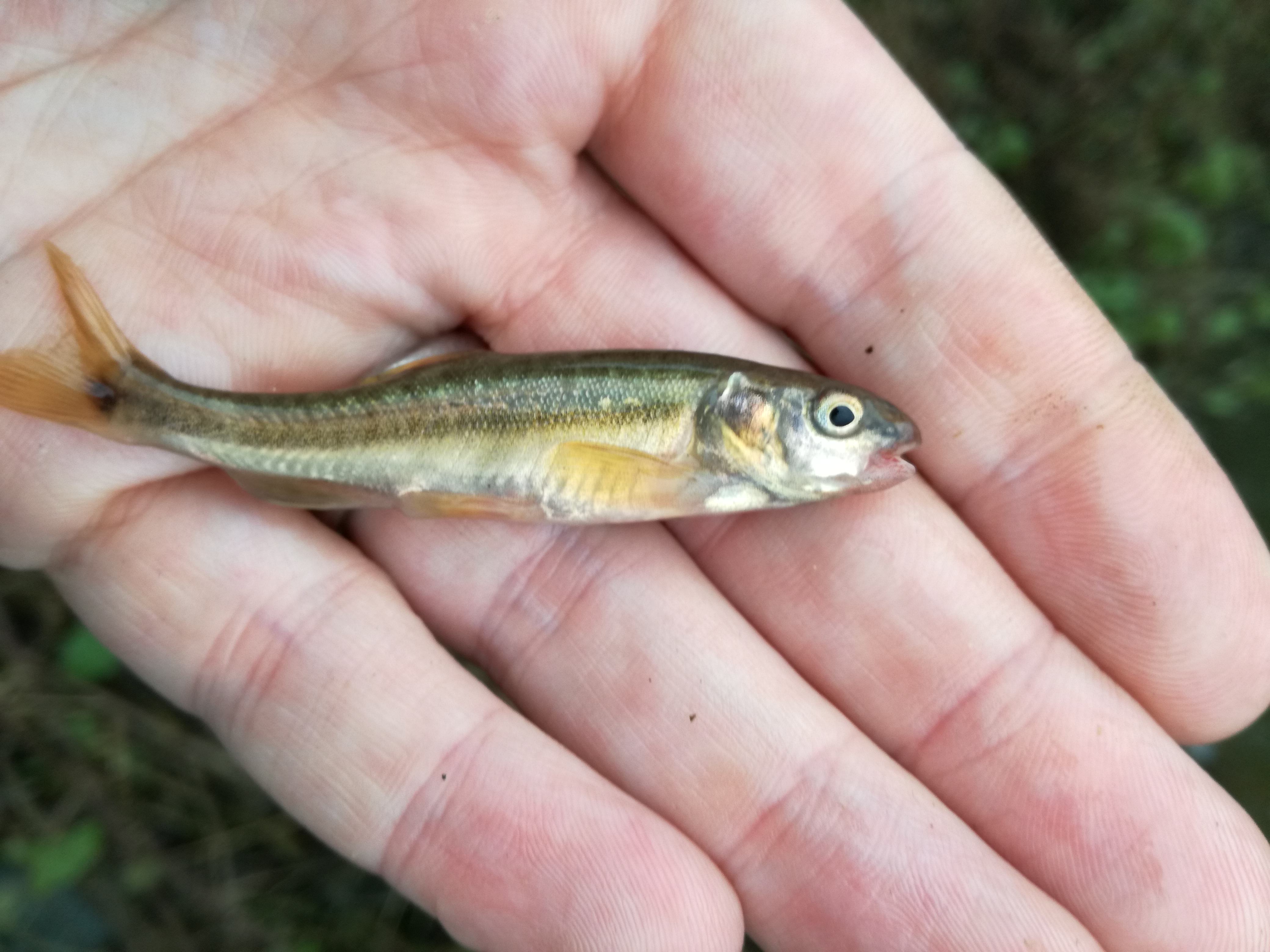 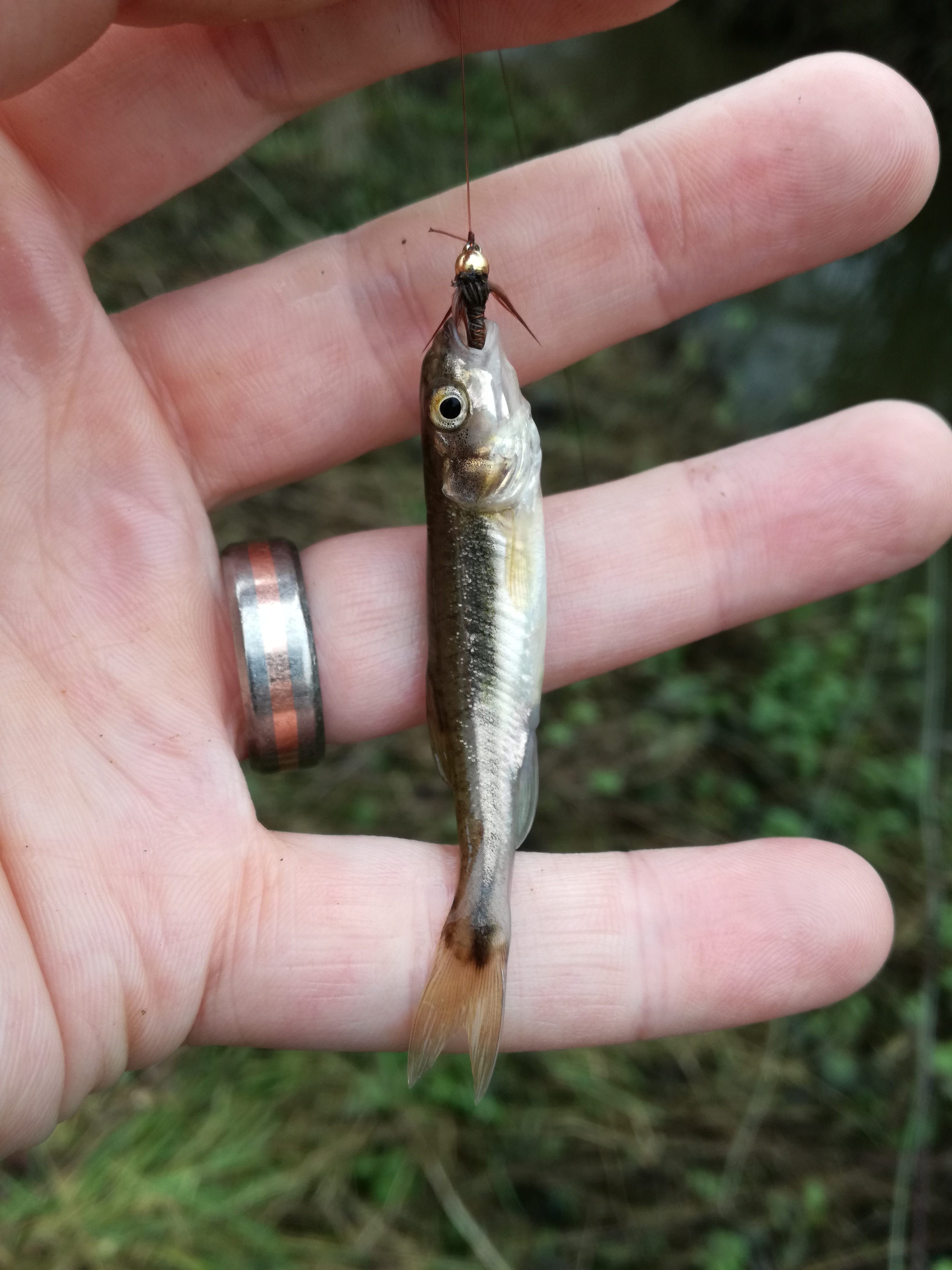 I added a split shot (I didn't have any tungsten beaded flies) and cast in to a likely pool, the fly sank noticeable more quickly and l was straight into a decent (for this venue) Dace: